Use the above links or scroll down see all to the Xbox 360 cheats we have available for Star Wars: The Force Unleashed. 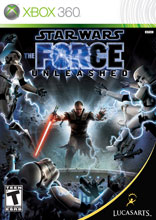 Note: Enabling a costume code may prevent some intermissions sequences from being viewed. The game cannot be saved and some achievements cannot be earned when non-costume codes are enabled. To bypass this, reach a checkpoint in a new area after enabling the code(s), then intentionally die, exit to the main menu, and select "Continue". Manually save your game, then quit to the Xbox 360 Dashboard. Continue your saved game to be able to manually save and earn achievements with the code(s) in effect. Note: This must be done before finishing a level, otherwise your profile will be flagged as using cheat codes.

To kill a junk titan you have to first press and hold LT. After that you will see your force. then press B and you will throw your lightsaber. (It inflicts a lot of damage). Note: Attack at long range or you may be crushed by the Junk Titan.

Walk past the titan and blast open the door. Keep using force lightning and blasts until it is dead. You may also use your force grip to hit the titan with objects.

Enter SOHNDANN and you will open all costumes.

Enter "HURRIKANE" as a code to unlock all lightsaber crystals. Note: Enabling this code will remove all lightsaber related Holocrons on the current saved game file, thus blocking the "Holocron Collector" achievement from being earned.

Enter LIGHTSABER as a code.

Enter KATARN as a code.

Enter "MANDALORE" as a code to unlock Kota.

Enter "HOLOCRON" as a code to unlock the Apprentice's hooded costume.

To get the white clone trooper, enter the code TK421WHITE

Enter prototype as a code.

To play as Palpatine type in MASTERMIND

Enter "MOLDYCROW" as a code to unlock all combos.

Enter KORRIBAN as a code.

Enter MARAJADE as a code.

Enter EXARKUN as a code.

Enter DANTOOINE as a code.

Enter "WOOKIEE" as a code to unlock the Apprentice's father's costume.

Get a Frenzy x8 bonus.

On the first level as Darth Vader kill 12 of your own storm troopers and you will get worst day break ever achievement.

The Bigger They Are Achievement

The Harder They Fall Achievement

Complete Game - Apprentice difficulty. Do not change the difficulty after the game has started.

Complete Game - Sith Warrior difficulty. Do not change the difficulty after the game has started.

Complete Game - Sith Lord difficulty. Do not change the difficulty after the game has started.

Complete Game - Sith Master difficulty. Do not change the difficulty after the game has started.

Defeat 100 enemies with a grapple move.

Get a Frenzy x4 bonus.

Collect all Jedi holocrons in the game.

Complete all bonus objectives on one level.

We have no easter eggs for Star Wars: The Force Unleashed yet. If you have any unlockables please submit them.

We have no glitches for Star Wars: The Force Unleashed yet. If you have any unlockables please submit them.

We have no guides or FAQs for Star Wars: The Force Unleashed yet. If you have any unlockables please submit them.

We have no achievements or trophies for Star Wars: The Force Unleashed yet. If you have any unlockables please submit them.

Submit a cheat for Star Wars: The Force Unleashed