Use the above links or scroll down see all to the Nintendo 3DS cheats we have available for Super Mario 3D Land. 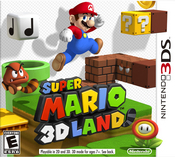 Turn To A Statue

Collect a gray tanooki leaf in the special world and a red or green bandana will apper around your neck perform a ground pouned to turn to a statue.

Best 3D In The Game

When you enter level 5-2 you will see 2 blocks jump on top of ether one now turn your 3D all the way up then press up on the d-pad then on top of the block, jump and don't just tap it hold that thing down believe me it looks AMAZING (works even better if you have a tanooki suit).

Find the three Koopa Troopas and three coin blocks immediately after the checkpoint flag in World 1-2. Step on the first long coin block on the ground, then walk down onto the Koopa Troopa below when it moves directly below the coin block. If timed correctly, you can bounce off the Koopa Troopa repeatedly and get unlimited lives.

How To Get Past World 5 In Bowsers Castle

You need 20 or more lives then lose them till you get to 3 or 2 then a wing will pop up next to the super takoonior tanooki then hit the wing one and it will fly you to the goal flag. I did it once bowser was hard but I like cheating sometimes.

When in level 1-2 I think you see three turtles don't get the star in the room go to the turtle next to the rectangular shaped box and get his shell to repeatedly hit that block and then jump on the edge of the? Box to get rapid fire lives (limit is three crowns and does not count for your score on the game) now when you lose a life it doesn't matter.

In World 1, Level 3, look through the binoculars. Wait a while, then zoom in on a white, grayish object. It's a UFO! It disapears after a while. Also, in World 4, Boo's house, go to the flag pole. Wait a little bit, then a wierd ghostly alien will appear for a while. It looks like Shy Guy though. (I found these on Youtube)!

You must beat the last place in SW 8 and it will send you to the huge castle in world 8-7 and beat that but be carfull bowser is stronger than ever.

In W1-3 there will be to piranha plants - kill them. Then you will see a Green Shell Koopa Troopa - kick his shell off the mountain. Then go back to where the second piranha plant was and jump off the left side. There will be a warp pipe that will take you a further to the end of the level!

Go to w1-2 and press the L or R button to go under the spikey ball. If you time it correctly, you'll go right under it and won't get hit. It's all in the timing and pressing the right buttons.

In World 1-2, its cool going up that wall and straight through the orange pipe! It's a nice shortcut.

Go to world 2 level 3 then go to the end of the level past the flag poll and you can go in the castle.

You need fire flower! At the end of the level 1-2 before the pipe there will be a thing with wood that is supposed to be lit but it is not so light it with fire and there will be coins on the floor.

Mini Hat Or Normal No Hat

Have you ever wanted to have a mini Mario or Luigi with a hat or normal size with no Hat? Well i'm going to tell you how. First you have to use the infinite life cheat in world 1-2 until you get triple crown lives. Then after you have triple crown lives for mini with a hat you just get hit (like how you would normally) and you would be mini with a hat. For large with no hat just have a power up like tanooki or fire power and get hit and you will have no hat.

On W5-2 the camera will be fixed overhead why its a Zelda level! How do I know this? Well if you get the fire flower in between the 2 blocks on the first room (invisible) and just go right you will come to a room with 4 pots with wood in them, light all 4 on fire and you will hear the old Zelda song and the gate will open Saguaro Meomoto also said that it was a tribute to Zelda's 25 Anniversary!

When you are at the first boomerang boss in the airship you jump on it the when its in its shell keep jumping on it and you get a certain amount of lives.

How To Jump To World 2

In level 1-2 after the check mark and you are in the next room. Jump onto the second? Block then jump up again onto a hidden platform and go right. Then keep going and then jump a gap. Keep going you will find an orange pipe. Go down the pipe and you will appear in World 2.

Level 7-3 Quick Way To The Finish

YOU NEED TO HAVE A TANOOKI LEAF! First go to level 7-3. Then go through the level a tiny bit and you will see a piranha plant on a flying platform. Defeat the piranha plant and jump on the flying platform. Then fly over to the tight ropes all the way over there and you will land on one. Continue through the level (it doesnt take long) and you are at the end in no time!

When you are in World 1-2, there are three "?" coin blocks after the flag pole. Jump on top of one of them, then jump further up and away from the screen. You will land on a narrow ledge. Run past this part of the level. When you reach a gap in the higher area, jump over it, and keep running to reach an orange pipe that will take you to World 2.

In World 4-2, near the end of the level, while jumping up the large shaft via the spotted bouncy platforms, use the last bouncy platform to angle your jump to left to reach a narrower shaft. Note: You may need to do some wall jumps. Go up and to the right. Run all the way to the right to reach an orange pipe that will take you to World 5.

If you reach the goal post when you're holding an item, it will convert to an extra life.

To unlock Luigi, so you can play as him, you must clear Special World 1.

Effects On The Flagpole

Get the indicated number of Star Medals to unlock the corresponding Star Medal level:

We have no easter eggs for Super Mario 3D Land yet. If you have any unlockables please submit them.

Go into the room right after the chek point in world 1 2 and face the middle koopa and jump on it right as its about to hit you.

We have no guides or FAQs for Super Mario 3D Land yet. If you have any unlockables please submit them.