Use the above links or scroll down see all to the Game Boy Advance cheats we have available for Super Mario Advance. 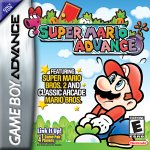 Go to Vanilla Secret 2 and hit the checkpoint. Go to the place where there are about 8 red spiky guys. Hit the bottom of the second yellow block. A silver switch should come out. Carry it all the way back to between the two purple pipes with the flower guys and jump on it. Run all the way back to the begining or until the POW music stops. If you collected a lot of coins, you can get 40 + lives!

When you are battleling the Boss that trows eggs jump on it and press B and you can take its ribbon of. Note: This doesn't work on the pink boss.

You must be in world 3-1 Choose world 3-1. Right as you start run past the red shyguys and go through the door. Right after you go through the door you should be in the area wih clouds. Leap of the cliff. While your falling try to snag a coin thats on the left wall. Then move to the center of he pit, evetually you'll reach a small island with a door. Go inside and dig in the weeds in the cave until you find the potion bottle. go over to a cartwheel pot to the right, drop the bottle to make a magic door and while in he magic door, hop into the pot to send you teleporting to world 5.

To use this cheat you must be in capter 5-3. Choose world 5-3 and after you start, walk past the pathetic shy guys and climb the ladder. Once above ground, walk over to the nearest red grass clump. Pull up the hidden red shell from the ground and ride it while charging up a super jump.use the super jump off the shell to leap to the platform above the ladder in the beginning. this is easily aquired with peach. After this,pick up the secret potion bottle from the ground. Make a door near the pot,go in, and while inside the magic door, hop into the pot. this will warp you to world 7,...... this whole thing is poinless if you've opened the yoshi cahllenge though.

Fly Away With More Lives

Pick Peach then get a big shyguy and fine 5 or more little shyguys you will get 1 and/or 2 lives.

In any desert level with a cactus you can make it fly. Find one on a ledge and let it chase you. Then, go down off the ledge and the cactus will fly.

On leval 3-3 go to where the big POW block is. Start running throw a bomb at the purple guys. Then pick up the POW block and run until you fing the electro balls then run very fast and let the POW block go it will bounce and hit all the enimes. This will give you ten lives. Do it over and over again and you will get 100.

When ever you pick up a shell, when you kill it an enemy with it you will receive a heart. Then you can jump on the traveling shell and push B to use it again.

Every fifth vegatable you pick up, time may stop for a moment and the enemies will remain motionless. Do watch out because they can still hurt you.

On every fifth cherry you get in a level, a Starman will appear. Chase it down and you will become invincible for a short period of time.

Get 1 Life In A Pipe

In some pipes or jars you go in you find some shyguys. When you pick them up and throw it to another shyguy you get 1 life. If you hit more shyguys then you will get more.

If your the first player in Mario Bros. battle you can put handicap on were you only need 1 coin to win. Note: this only works in the first round.

In round 10 and higher, get to the second platform and there's a fireball. Try to eliminate it like you would do to an enemy and you'll get 1000 points each time.

After climing up a vine there will be 5 or 6 purple enemies. Go left then throw that enemy off the platform. Pick up a turnip go left to the edge wait for the bomb to flash throw it down to break the bricks. Go into the door jump up to the platforms jump to the left run left till the end. Jump off and the boss should be at the bottom.

Go to world 5-3 as Luigi. After you climb the first ladder, power jump (hold down until you are glowing) on to the platform you normally can't reach. Pull up the plant on the right side of the warp pot. Throw down the bottle and go through the door. In the dark world, jump on top of the pot and go down. You should see the screen wiggle and it will say warp world 7 on a screen with Birdo.

How To Beat Wart

Catch vegetables that comes out of the ground and throw them at wart when he starts to spit out bubbles.

Go to World 3-3. Climb the ladder then jump over the spark enemies to the door over on the ledge. Find the red grass patches; the last one is a shell. Pick it up. Go back to the bottom of the area, and then toss the shell into the doorway. Stand on the ledge and wait. After the shell defeats enough Shy Guys to earn 1,600 points, you'll start earning extra lives. You can easily, and quickly, earn up to 99 lives.

In World 6-3, climb the vine or go through the door to get to the next area. Then, instead of going right through the world, go left into the quicksand while holding Left. As soon as you see your character's head disappear. Start jumping to the left. Keep going until you reach a door. Go through the door. You should then be on a cloud. Keep jumping from cloud to cloud until you see the door, then enter it.

After entering the first door, use Luigi to reach the vase at the top. There is also a potion located there. Enter the new door and then the vase to warp to World 7-1.

Use the Princess in World 4-3. A castle will appear after crossing the lake. Do not enter the castle. Instead, fly further across the lake to find another part of the castle.

Take a potion in the second part of the stage, to the only vase. Enter the door and then the vase to warp to World 6-1.

There is a Giant POW in the level. Use it to kill all of the little porcupines around you. Go up the vine and go back down. Sacrifice your energy to get to the POW and kill them again. Go back up and get the Heart by holding Down for a few seconds and jumping. Repeat the process until you get as many lives as desired.

On World 4-1, get the Princess. Go up the vine, but go to the left. Run and fly to a secret door. Go through the door and use the bombs to blow up the wall. Then, jump over the top of the screen and run left.

After you go into the first door, walk into the hole. There is a piece of land with another door located there. After you are in the door, go to the end, then start picking weeds. The red ones are placed at random but are usually near the back. If you want a lot of coins, just throw it where you found it. If you want to warp, just throw it near the vase object.

In World 3-1, use Toad, because of his lifting power. Fall down the waterfall, onto the platform where the door is at the bottom. Enter the door and get the magic potion. Drop it anywhere where there is a continuous stream of coins. Enter this door, and get as many coins as possible. Go out the door you used to enter, then return, and repeat once.

At the end of the outside part, there is a vase object. If you carry a red liquid in a bottle and throw it there, you will go down. Take a potion to the last vase (past the door) and throw it. Enter the new door and then the vase to warp to World 4-1.

In World 1-2, select Luigi, get the carpet, and fly to the land. Instead of getting the key, pick up the hopping Ninja and throw it in front of the door. Then, prepare a squat jump and wait for him to jump high. If done correctly, you should jump and reach the hill above you. Then, run past the first door and enter the second one to fight the Boss.

Each time the spinners start in the bonus round, the second symbol in the first slot is always a cherry. If done correctly, you can usually get an average of at least one extra life per coin.

When you use the magic potion to get the mushrooms, do not pick up the surrounding vegetables (which are coins in the magic door) immediately. Instead, find the location in each level where there are the most vegetables that are close together. Drop the magic potion and go in the door. Pick up as many coins as possible. Repeat this once, after doing something that will make the potion reappear (such as climbing a vine, going down a pipe, or entering a door).

Find a giant enemy and throw them. Do not through them off a ledge or into an enemy. A heart will pop out of them. You can do this as many times as needed if you do not kill them.

Get to a part in the game where you fight Birdo. Jump on her head and press B, as if you were picking up a vegetable. You will pick up her Bow. You can either throw it at her, which causes it to appear back on her head, or throw it off the edge or something so she is bald.

Press Select + R to pause the game while only use minimal battery power. Press Select + L to resume the current game. Note: This will shut off of the LCD screen and sound, but your game will still be paused.

Press R, Select (same time) to put to sleep than press L, Select to wake up.

To super jump hold down until you start to blink then press A.

When you turn on the game hold L, R, A, B, Start, Select. Hold it until the screen says "erase data".

We have no unlockables for Super Mario Advance yet. If you have any unlockables please submit them.

When you complete the game, there is a bonus game where you have to get eggs of yoshi. Heres a hint for you guys that completed the game (not the bonus):

After defeating Wart in World 7-2, you unlock a special Yoshi Challenge game on that file. It allows you to replay any stage in search of two Yoshi Eggs. Unfortunately, it gives no description of the kinds of areas the eggs could be hidden. The eggs are hidden in Subspace, but the searching for the egg is the challenge. Also, if you lose a life, you lose all of your eggs as well.

We have no glitches for Super Mario Advance yet. If you have any unlockables please submit them.