Use the above links or scroll down see all to the Wii cheats we have available for Super Mario Galaxy. 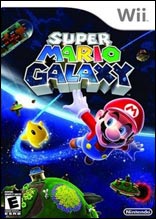 First you must beat the game and unlock luigi. Then when you get ready to start a new game dont. Change your face thing on your planet to the new one(luigi). Then start a new game and talk to the toad that gives you the letters to mario from peach. But when you talk to him with luigi he will say that this letter is not for you(luigi) but for mario. And instead of giving you 5 1UPS he will give you twenty. He will do this every time you turn the game back on. Trust me this is good if you are getting stuck and need some extra lives. P.S This works with only luigi and not mario.

How To Defeat Boos Under Water

When you get a shell under water there is a light beaming out of it then shine it on the boos.

While in the air do a spin and then instantly after ground pound, it will look like a ballerina version of a ground pound. Theres really no point in doing this except it looks really cool.

How To Beat Bowser

Just make bowser jump on the blue thing and spin when he is about to hit you. Then spin by him and do that 3 or 4 times!

When you get the 5th grand star you'll unlock two domes. Ones called the garden and ones called the gate. Go through the gate and get on top of the Coliseum. Now talk to Rosalina and a red luma will appear. Talk to it and purple coins will appear. Collect all of them and go back to where you found the red luma. A red star will be there. Collect the red star and go to the garage. A red power-up will be there. Get it and start flying!

How Too Be Ghost Mario

Go to the haunted house and and see a white thing go too it be it and how too go over prees a and shake.

Galaxy:Honeyhive galaxy mission:third mission big bad Bugaboom. To defeat Bugaboom get on top of him and ground pound. Now turn into Bee Mario and fly onto the honeycomb wall on the tree master your timing. When he gets under you GET OFF AND GROUND POUND! Now repeat but DO NOT ground pound when he turns. AND AVOID BOMBS!

As soon as he is free of his shell, he will begin chasing you. He is always faster than you. The best thing to do is turn around and go around him. He has a one track mind. When he starts running, he can't do a full 180. If you try to gradually turn around him, he has enough time to react. Just turn around and pass him. Watch which side the tail goes out on, and the next time you hit the tail, it will go out no the other side. If you do this, its a cinch.

How To Beat Fire Dino Piranah

In order to beat the piranah you must first wait until the falame on his tail goes out. Then, continue to do that but remember that he/she runs faster after every time you hit his/her tail. HINT:his/her tail will light on fire faster and faster.

When you get the mystery coins in gusty garden, level 3, there will be a rainbow star. Get it then go to the golden chomp; after that a star will come out.

Did you know there is a hidden star in beach bole? Grab a sheel go to the pangin that's running. Go down more and there will be a chest. Hit it with the sheel. A sling pod will appear. Go in it do the rest. And that how you get a secret star.

Go to the gate talk to lady Rosalina then talk to the red luma then use red star to fly and collect all 100 purple coins. Then after go to the top of the bedroom or the garage and use the red star.

Freezing Opponents (Only Able With 2 Players)

In 2 player mode, you can actually FREEZE opponents! The Star Bit collector simply clicks the "A" button on an opponent or rock or...anything (except bosses)! This will let you be able to hit them while they are freezed and just kill them that way!

In the first level of Good Egg Galxy, complete the level up to the part with the rolling rocks and weird sticky green stuff. You need two players to do this. The Star Bit collector has to press the "A" button when positioned on one rock. This rock will freeze and the next rock will smash into it, causing a lot of Star Bits to come out of them. Do this with every rock until it is cleared. It will be a good way to earn more Star Bits and easier to get the pieces of the Launch Star.

To defeat megaleg, get to the top of him and make the bullet bills smash into the dome with the grand star in it.

After you have Mario and Luigi with 120 stars and defeated Bowser to get the Grand Finale Galaxy go there to collect 100 purple coins and get the last star (the 121 star).

To pass the sea slide bonus (Hurry, he hungry), first you need to feed the luma star bits. Then before you go into the cannon, grab the Bee Mario that way you can fly over the holes and not get sucked in to death.

When you give a luma 40 star bits you get a new plant. You only get 30 sec to blow up all the junk. A faster way is to get a bomb and jump on it. Be careful lose lives.

Because you start each game with only four lives (after shutting the game off and turning it back on), you might be in need of some extra lives upon rebooting the game. You can usually get five right off the bat from Toad (he'll run around with a letter above his head, symbolizing a letter from either Luigi, or more likely Peach). There are four more strewn around the Observatory that you can acquire, however: * 1.) On the moving green platform below the core. * 2.) Under the stairs leading to the kitchen. * 3.) Right at the top of the observatory. (Once the Red Star is unlocked) * 4.) Underneath the entrance to the gateway to the stars. (Once the Red Star is unlocked) * 5.) Next to the StarShroom (in a crate)

If you have a second Wii controller, you can have a friend play along with you. While there won't be a second player on-screen, you will have a second cursor to use. This means that Coins, Star Bits, and the like can be collected by the second player. There's also some functionality in controlling Mario's jumps.

If you want to do a specialized stomp with Mario or Luigi, try the following. When you jump, before you press the Z button to do the Ground Pound, spin by shaking the Wii controller. As you are spinning, you can then press the Z button. The result? A stronger stomp that will actually track the enemy and follow it, kind of like a heat-seeking missile!

There is a one up on top of the garden center. (need flying star)

How To Defeat Dino Piranah

1ups On The Start Area

Grand Finale Galaxy isn't really a galaxy. It's the level in front of the castle where you start the game with Mario. To unlock it, you have to get all 120 stars with Mario, then do it again with Luigi. When you do this, Princess Rosalina will ask you to go to Bowser's Galaxy Reactor. Say yes, fight Bowser. Then she will bring you back home. It has one star, The Star Festival. You have to collect 100 purple coins. When you get them all, go to Mailtoad and he'll send a congratulatory message to your Wii Message board. You have just beat the game 100%! NOTE: You have to beat it with both Mario AND Luigi to beat it 100%!

Where To Find 3 1up Mushrooms

There is 3 1up mushrooms. 1 is in the crate in the garage. 1 is under the stair at the kitchen. And 1 is under the library (note you must get on the green thing after it is under it).

Get 5 1up Mushrooms From Peach

Sometimes peach will send a letter with 5 1up mushrooms.

How To Beat Bowser

This is simple. Make him jump on the blue circles it will bust and make lava burn his butt.

Get A Longer Life

When first starting the bee galaxy. Walk backwards and there should be a sign. Just to the right of that should be a little cliff. Jump on that and you will get a boost in life. (*note: may not work on all bee galaxy levels)

Go under the stairs at the kitchen.

To get the Flying Mario ability go to the Gate, which is located on that flying island. You can get there when you unlock the Garden observatory. First, go to the castle thing on the planet you appear on. Then a scene will appear and then a red Luma will tell you to get all 100 the purple coins. He will let you use the Flying Mario ability. Then, when you get all the coins, you can go to the red Luma which is located on top of the Bedroom observatory. I hope you enjoy flying!

When you enter the area with the two hemispheres of water, there is no need to collect the star pieces to make a boost star. Instead, get near the wall when you surface, then jump out of the water and perform a wall jump followed immediately by a spin. You should be in the upper hemisphere.

When jumping, shake the wii remote to stay in the air for better jumps.

There's actually 121 Stars in the game, not 120. To get it, you must first have all 120 Stars. This unlocks Luigi. Beat the entire game with Luigi, defeating Bowser at the end. After this, a new galaxy will be unlocked. Finish this final galaxy to get the 121st Star.

Collect all 120 stars and fight bowser. After the credits you will get a message that luigi is a playable.

Finish the whole game (Which means to get all 120 stars), then go back to the Comet Observatory and talk to Rosalina and ask to fight Bowser one more time. Once you defeat Bowser, Luigi will become available.

We have no easter eggs for Super Mario Galaxy yet. If you have any unlockables please submit them.

We have no glitches for Super Mario Galaxy yet. If you have any unlockables please submit them.