Use the above links or scroll down see all to the Game Boy cheats we have available for Super Mario Land 2. 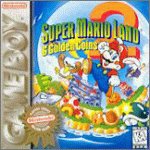 Go Under The Screen

After you beet a spot that has a long tunnel go in the tunnel then before you reach the end going down push start then select then go back on the level and you should fall down below the screen then you can run around and possibly unlock secret levels just be careful cause you could also die.

Get To Space Zone

In that hippo bubble level, in the first hippo as you are about to get into a bubble, don't! Go into the water instead. You'll notice there is a passageway leading backwards that you might think is just there as the beginning of the underwater part. Its not. Keep going backwards till you reach the end and there will be a '?' square with a Money Bag. Also when you are in a bubble floating midway through the level, look closely at the clouds. One of them will be an arrow-shaped one pointing upwards to a small little cloud. If you upwards into the middle of the cloud then you should hit and invisible square with another Money Bag. Keep doing this again and again to get more and more coins.

If you are on a level that you have beaten you can go back to the map without finishing it. All you have to do is pause the game and then press select.

Boss #3 is an easy win(if you have fire Mario). He's fast but, fire balls will catch him if you watch out. Fire at his tail until he dies. Note:Run to the left when drops off the celling and, remember what tube he's in.

Huff And Puff And Blow The House Down

Boss #5 is probly under the Alien in hardness. Both fire balls and jump timing is evey thing in this fight. Straw pig just rolls around fire away and when he's close jump. Wood pig jumps around some attack him but be careful about jumps. Brick pig jumps very high becareful and bar-ba-cue him with fire balls. Once he's a hicory ham the coin comes from his house.

Finaly boss #6 an octapus that has jr. asistans. Use bunny ears to hover and when he's under you drop. Duck to avoied the baby octapus.When he's dead you'll "bag" another coin. Now for Wario.

Drop A House On The Witch

Boss #4 is a little hard. This witch can teleport to two places and, shoots fire in four directions one under each pot and one strait. Plus fire balls and bunny ears are only life supporters. Stay in the middle until you see the witch then, go to witch, doge the fire, then jump on her. When the fire goes under a pot the lid will rise and,you will hit the spikes. When the witch dies you will smell what the witch is cooking a coin.

When this boss is at the right use bunny ears to hover over the left or, vice vercia. Then the first gold coin will hatch (hint hint).

On the bubble level go into a bubble and go backwards to the wall then go upward and you will find a box that has a hart in it.

When You are picking the folder that you want press select. It will say easy mode. Then Go play.

We have no cheats or codes for Super Mario Land 2 yet. If you have any unlockables please submit them.

We have no unlockables for Super Mario Land 2 yet. If you have any unlockables please submit them.

We have no easter eggs for Super Mario Land 2 yet. If you have any unlockables please submit them.

We have no glitches for Super Mario Land 2 yet. If you have any unlockables please submit them.