Use the above links or scroll down see all to the Game Boy Advance cheats we have available for Super Robot Taisen: Original Generation 2. 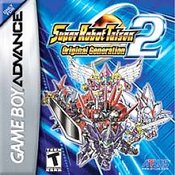 We have no tips for Super Robot Taisen: Original Generation 2 yet. If you have any unlockables please submit them.

We have no cheats or codes for Super Robot Taisen: Original Generation 2 yet. If you have any unlockables please submit them.

Ex Hard Mode Finish the Story Mode
Special mode Beat EX hard mode once
Sound Test After beating the game once, highlight "change BGM" while in the battle menu, and press down, up, left, right, l, r.
Gravition Launcher Let Viletta kill all the enemies in chapter 6 except Seolla, Yuuki, and Carla. It'll appear on Viletta's MkII-R in Chapter 15
Boost Hammer Let Arado kill all the initially placed enemies in Chaper 16 within 4 turns, and it'll be available after the chapter.
Shishioh Blade Bullet's kill counts is more than 45 before the end of chapter 14 and it's available before the beginning of chapter 17.
G impact stick & New Chaguramu Shooter Don't use Daigenguard to kill any enemy in chapter 30. (But Gungrest Type 3 can)
Soul of Steel, Mark of Brave, High-tech AI,2nd Shishioh Blade, 2nd G impact Defeat all 3 bosses in chapter15. Note the Graterkin (upper position) must be defeated last.
2nd Soul of Steel & 2nd Mark of Brave Before the end of chapter 33, both captain's levels are over 33

Get at least 35 skill points before the end of scenario 42 to access the final stage.

Gespenst Mk.II S Make sure Kai has at least 55 kills and is level 33 before the end of stage 33.
Wild Wuerger L On stage 19, make sure Arad destroys at least 4 Gespensts before moving him next to Zeora. Make sure he has at least 55 kills before stage 24.
Keeping the Wild Wuerger L On stage 27, make sure Mai gets at least 5 kills with the Wild Wuerger L.
For both of these, make sure Lamia moves onto the square Echidna retreated on during stage 10/13 (depending on which path you took) and that she has a total of 55 kills before the end of stage 24. She will join you with one of them on stage 28.
Unlockable How to Unlock
Ash Saver Make sure Lamia has 2 (and only 2) battle encounters with Axel on stage 19.
Vysaga You only get the Vysaga if you are playing on a New Game+. To get it, make sure Lamia has only 1 battle encounter with Axel on stage 19.

Stay in Easy mode by getting very few skill points and when you get to Scenario 16 Gilliam's Gespenst will have it equipped.

Kill Carla in any of the first stages and when she joins you she'll have it equipped on the Randgrith.

We have no easter eggs for Super Robot Taisen: Original Generation 2 yet. If you have any unlockables please submit them.

We have no glitches for Super Robot Taisen: Original Generation 2 yet. If you have any unlockables please submit them.

We have no guides or FAQs for Super Robot Taisen: Original Generation 2 yet. If you have any unlockables please submit them.