Use the above links or scroll down see all to the PlayStation 2 cheats we have available for Superman: Shadow of Apokolips. 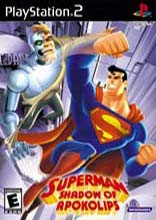 There are two large circular white areas in the gas leak stage. To activate them, hover over them and press Square and X to perform a Shock Wave.

Locate the Inter-Bot leader and concentrate on defeating him, while ignoring the others. Once he is defeated he will respawn. Locate him again and defeat him. He will respawn on the edge of a vat of fire. He will be dizzy. Fly over there quickly, hover in front of him and hold down the X button to deliver a super punch. That will finish him off for good. If you accidentally mess up, just repeat the procedures.

There are four gas leaks. Simply pick up the large cells, one at a time, and fly them to the yellow gas leaks. Stand facing the leak and hold X to place the cell over the gas. Do this for all four. Be carfeul of the glitch that could trap you underneath one of the gas leak repair areas. If this happens, wait and see if you can get killed rather than resetting. If you reset you will have to start the level from the beginning....which is a bad thing.

With some trial and error you will have to smash the three boxes that house the generators. If you smash any other boxes you'll be in trouble. Once box is near the front and the other two are at the back on at the far left (approximately). Pick up one at a time and place it into each machine that requires it.

During your battle, look for two rooms that will open up that have a control panel on the wall. Use your heat vision to disable the panels. This will cause the laser grids to disperse. At both unlocked areas, go up to the large device sticking out of the wall. Stand in front of it and hold the X button. Superman will push the device and activate it. Do this for both areas. This will cause a large Energy Ball to appear in one of the areas. Across from that area is the room you need to exit the stage. During the next stage you will have to kill all the enemies in the room, then exit the room and go back to where the Energy Ball is. Stand in front of the Ball and hold X to lift it. Then fly it back into the room and place it in the area that was enabled when you destroyed all of the Inter-Bots.

The level is timed so you have to be quick. Fly to the area with the three warehouses. Don't waste time worrying about the sentry guns placed outside. You should be flying at Super Speed towards the warehouse, once there, use your Super Speed flight to smash into the door. You'll bust through on the first try. Once inside, go for the Inter-Bot that is holding the scientist hostage. Defeat him first and then go after all of the other Inter-Bots. You must destroy all of them before the scientist will shutdown the forcefield. Once he has, use X to pick up the large cell near the front of the room and fly it to one of the generators. You MUST be standing on the platform to set it into place (hold the X button down). Then repeat twice more. Once they are all in place, you must hover in front of each and rapidly press the X button to set it into place. Use two fingers on the X button and go nuts.

In levels that have no time limit, take time to recover in a safe place. Your health and Super Power meter increase over time.

In Cheat Menu enter: JOHN_CORBIN to unlock all levels.

Enter MXYZPTLK at the cheats section.

Enter LARA at the cheats section.

Enter SMALLVILLE at the cheats section.

We have no unlockables for Superman: Shadow of Apokolips yet. If you have any unlockables please submit them.

We have no easter eggs for Superman: Shadow of Apokolips yet. If you have any unlockables please submit them.

We have no glitches for Superman: Shadow of Apokolips yet. If you have any unlockables please submit them.

We have no guides or FAQs for Superman: Shadow of Apokolips yet. If you have any unlockables please submit them.

Submit a cheat for Superman: Shadow of Apokolips