Use the above links or scroll down see all to the PlayStation 2 cheats we have available for Tekken 5. 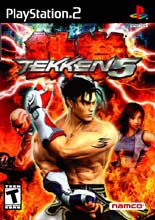 To get Devil Jin, either finish "Devil Within" or do 200 matches in arcade.

During fight, press left , left, square. Do it twice your opponent is finished! You can also start the move from pretty far back and start when your opponent starts to move.

Press back, back, square. Once you do that, you'll be able to defeat your opponent easily. It takes a little time, so step back a little bit and do it before the opponent starts an attack. Do it twice and you win.

An Easy Way To Defeat Jinpachi With Yoshimitsu

To get an easy million gold beat Tekken: Devil Within on any level.

Are you tired of Jinpachi always attacking you with his fire attack? Okay to escape it just press quickly up or down twice and you can escape the attack and defeat Jinpachi easily. (sometimes he will fire another fire attack when you escape the first attack so be careful).

The Easiest Way To Defeat Jinpachi

The easiest way to defeat Jinpachi is to jump towards Jinpachi then press circle. Do this 5-6 times each round and you defeated Jinpachi. (Not all characters can do this, so do different moves like Steve).

Tricks From The Wall

When fighting go to the wall and press back, back, up+back and if do it correctly that character will run to the wall twist in the air and do deadly damage

Do A 47 Combo With Asuska Kazama

To do this hard trick, when fighting press Triangle+Square+Circle+X all at the same time and keep pressing all the buttons you will at least get up to fifty or 47.

Ganryu has a move called the Kabuki Palm. Press down and then quickly press triangle. You can press triangle repeatedly as many times as you like. This can result in a 99 hit combo.(the game stops counting after 99.) Make sure you are close enough to your enemy that when you hit them it doesn't knock them too far away, otherwise you won't get the second hit and the combo can't be carried out. Practice the combo in practice mode to get it perfect. Once you have it down you will be able to KO your opponent with just that combo.

Go to the customizations select and give her no head band a green shirt for color1 and a bow and it will look like kagome from inuyasha.

Get more "Force" in Tekken Minigame

In the Tekken: Devil Within minigame, the blue light that your defeated enimies give of is called "Force". In the end of the minigame the amount of force you have collected throughout the game will add up as extra money in gold. You can gather force without fighting opponents, though. By hitting a tank or some other object until it breaks, you will get about 150 in force amount. do this to several objects and get alot of extra G at the end of it.

Get Up To 10XG On Arcade

While playing arcade, look up at the upper left hand corner where. It should state whatever stage you are on, (ex:stage 5) but on certain occasions a red light will be flashing behind the words. If so, be sure to win the stage. At the end of the match, multiple boxes will layer over top of each other. They will read numbers such as 2X, 3X, 4X, 5X, 6X, 7X, 8X, 9X, and 10X. The one that lands on top will be what you get. (Note: the game randomly selects amounts. If it lands on 5X, for instance, you will get 5 times what you would have won in gold.

Play arcade continuously. Once you get your player to about the Shihan ranking, lose on purpose and press start to continue. There should be a new player on the character select screen. I did that while playing as Christie and unlocked Anna.

Look Under Julia's And Anna's Skirt

To do this enter practice mode with any character and choose Julia or Anna as a training dummy. When you knock them down go behind and you will be able to see they're panties.

When your opponent is down back up untill your far away from him. Then when he gets up run towards him while tapping on the direction botton your opponent is. Then with a good run and good hit it will take a lot of damage to your opponent and he will fall the the ground again.

Eddy is just a costume for Christie. The price for buying him is 500,000G

But how do we do this? Well, first beat Devil Within, then as you play it a second time, items are given to you.

In arcade, since it is impossible for a beginner to fight a master on encounter, use a very high ranked player and choose to fight a master ranked fighter. Lose deliberately and continue. Choose someone ranked beginner and beat the master fighter. You will get more G. If there is a random roulette after the fight then all the better.

Since Jinpachi is not a playable character, in story mode, choose any fighter and fight until you get to the final stage. Lose to Jinpachi and do not continue. His movie will appear and will be saved into your theater. Along with "Jinpachi - Death".

Complete Tekken: Devil Within to win a bonus million dollars.

How To Get Theater Mode

To get Theater Mode, beat Story Mode with any default players the first time you do Story Mode.

To unlock a new player, beat Story Mode with any default players.

At the main title of the game press R1, L1, Up, Up, Down, Down, Start you will hear a laugh from kazuya.

You must be at the main title of the screen and press R2, R2, L2, L2, X, X, Triangle, Square and you will hear a loud roar from Armor King.

When fighting with Anna you must lose to lee and a secret movie will be unlocked.

How To Get Secret Items

To get secret items just bet Tekken: Devil Within on any level.

When being Yoshimitsu in story mode, lose to raven and a funny scene will appear.

To do this beat tekken devil within on very hard.

Keep Beating devil within and put it on hard.

We have no easter eggs for Tekken 5 yet. If you have any unlockables please submit them.

We have no glitches for Tekken 5 yet. If you have any unlockables please submit them.

How to Make Characters

Submit a cheat for Tekken 5