The Legend of Zelda: A Link to the Past cheats & more for Game Boy Advance (GBA)

Get the latest The Legend of Zelda: A Link to the Past cheats, codes, unlockables, hints, Easter eggs, glitches, tips, tricks, hacks, downloads, hints, guides, FAQs, walkthroughs, and more for Game Boy Advance (GBA). CheatCodes.com has all you need to win every game you play!

Use the above links or scroll down see all to the Game Boy Advance cheats we have available for The Legend of Zelda: A Link to the Past. 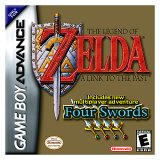 Easy Way To Get Invisability Cape

Go to dark world, go to where the stone/grave would be that you move, cut the bush go in use the mirror push the grave and go in (its easy when you do it).

In the light world, go to the strange man in the desert. Go directly south and you will see two big rocks. Lift them up to find a staircase going down. Go down to find a man surrounded by pots. pick up the pots to get 50 rupees. Then exit the room and return to find the pots there again with the rupees under them again. Take them and do this over and over again to fill your wallet.

This isnt much of a cheat code. But its a funny easter egg that will make you laugh. In the game you may slash or run threw bushes and find some straw chickens. You might wonder "Why the heck is there a chicken there?" Well, go find a chicken. There is one in a little fence by the fortune teller's house near the village. Go by the chicken and slash it over and over again. Dont stop other wise this will not work! After maby 15 seconds maby even a half a minute a swarm of chickens will swoop in and start attacking you! If you try slashing then it will be useless. You CANNOT attack these poultry. But its funny to watch a swarm of chickens come in and kill you. That way you can be walking up to your friends saying "I got killed by chickens" Over and over. And its a great way to cheer you up when your stuck on a level of the game. (This cheat is enabled in so far any zelda game like OoT and the nes zelda game im not sure if there are chickens in the windwaker game).

Get The Red Bomb Earlier

In the dark world, there is a shop with an arrow on it and a guy lets you shoot 5 arrows for 20 rubies. The first shot is worth 4 the second is 8 and son on until the 5th is 64. but if you miss a shot you start over at 4. Great place to get money and skill.

If you move next to a skull stone(dark world) it will turn white for a second and come alive and start chasing you. They take one heart away. They take 2 hits with the hero's sword and 1 hit for the other swords. Some of them don't do that but most of them do.

You have to break the mask on the big boss by throwing bombs to it or hitting it with the magic hammer. Attack the green spot with your sword until he falls. When you kill the monstrosity you get a magic crystal with a captive maiden inside. (In the Legend of Zelda: the Wind Waker the giant bird is the Helmasaur King.)

To beat Agahnim you have to hit the energy balls with the Master Sword back at him. But watch out! When Agahnim moves to the top of the room usually he is going to send thunder at you. Stand in any corner to avoid it. Also something that looks like an energy ball from Agahnim but is really a bunch of small blue fireballs that you can easily dodge. Right before you beat Agahnim he will flee and transport you into the Dark World.

To beat Moldorm hit it in the tail with the whirling blade attack six times. Sounds pretty easy, huh? Well watch out because Moldorm could knock you of the edges or in the middle. Kill Moldorm to get the Pendant of Wisdom.

There are three Lanmalos underground. When they come up you can use the whirling blade attack,ice rod or the arrows in the head to kill them. Once you have killed them you will get the Pendant of Power.

Since you can't get the golden bee from the dude in a shop which I can't find and your going to need the pegesus shoes with the bug-catching net. Go to the ice rod place and go into the door that you didn't blast go inside. Go up into the next room and charge with the pegesus shoes into the fairy statue and a golden bee will appear. Catch it with the net. Golden bees never leave the screen unless you let it go in a bosses lair and it can't attack the boss. For faster results use the flute if you have it and go to area 8 and go up till you get where I said. Then do the same thing.

First get the golden bee. Then go to Kakariko village release the golden bee near the man who gave you the first bottle and he'll say he'll buy the bee for 100 rupees. Then shoot five red rupees out. Don't worry about the bee it reappears in the ice rod place.

Go to Kakariko village and find a small house with four chimneys on top. Go inside and there should be a boy in bed. He's sick. Go over and talk to him and he will give you the bug catching net.

When you have 10 medals from the Four Swords game vist the Logger Bro. house and talk to the man inside and he ask will you to complete a riddle when you do you will learn a new sword move.

First have Ether. Go to one of those monsters that takes your shield with its tongue. While it has your shield halfway to its mouth, use Ether to freeze it, and kill it. Take your shield and it will be blue

The Palace Of The Four Swords!

After you complete Four Swords, return to A Link to the Past game to find that Link can now enter the Palace of the Four Swords. The entrance to the tower is at the pyramid of power. On the RIGHT side of the pyramid in the middle. Drop down to the cracked hole in the pyramid and wala your in, though you will have to pay a small fee of 20 rupees at the entrance. NOTE: Dont try this until you've finished A Link to the Past. You'll need all the iteams from the game and the skill and battle tastics you can learn.

Getting The Invisibilty Cape 2

TO get the invisability without the upgrade for the power-glove you need the the moon pearl, mirror, peaguses shoes,hookshot. Then you go to the the cemetary to the headstone at the right end at the top and you use the mirror and use the pegasus shoes and ram into the headstone and it opens so you can get the invisibilty cape.

In the Dark World, there is a shop with an Arrow on the front of it. If you go inside, a skeleton will tell you that you look like a sharp shooter and asks you if you want to play his game. The object is to hit as many targets as possible. He says you'll soon be rich, but you have to pay 20 rupees to play. Every target you hit only gets you four rupees, and you only get four arrows! (4x5=20). So, DON'T PLAY!!! It's just a boring way to lose all your money.

Do you know those pesky annoying bees? Well you can catch them with a bug catching net and use it against enemies. After catching the bee in a bottle, release it near an enemy and it will attack him.

Getting The Invisibility Cape

To get this you need the Titan's Mitt. In the light world, go to the cemetary and lift up the two green-colored rocks toward the right side of the cemetary. Then, charge into the headstone that's there and it should open up. Go down the steps and walk until you see a treasure chest. Open it and you will get the Invisibility Cape. Note: The Invisibility Cape takes up your magic meter. Watch it carefully!!

To break signs either charge them with your Pegasis Shoes or go up to them on the side and press R to pick them up. Then, to throw them, press R again.

Getting The Book Of Hylian Language

To get the book, you need to first have the Pegasis Shoes. Then, go to the library and use the shoes to charge at the wall. The book should fall and now you can read the words on the Master Sword's Stone.

Here are things that you will will get within the first half of the game:

Note: THESE ITEMS ARE NOT IN ORDER FROM WHICH YOU GET THEM

What you should have -

We have no cheats or codes for The Legend of Zelda: A Link to the Past yet. If you have any unlockables please submit them.

We have no unlockables for The Legend of Zelda: A Link to the Past yet. If you have any unlockables please submit them.

We have no easter eggs for The Legend of Zelda: A Link to the Past yet. If you have any unlockables please submit them.

We have no glitches for The Legend of Zelda: A Link to the Past yet. If you have any unlockables please submit them.

FAQ of the whole game!

Guide to Zelda: A Link to the Past

Submit a cheat for The Legend of Zelda: A Link to the Past