Get the latest The Legend of Zelda: Twilight Princess cheats, codes, unlockables, hints, Easter eggs, glitches, tips, tricks, hacks, downloads, hints, guides, FAQs, walkthroughs, and more for GameCube (GameCube). CheatCodes.com has all you need to win every game you play!

Use the above links or scroll down see all to the GameCube cheats we have available for The Legend of Zelda: Twilight Princess. 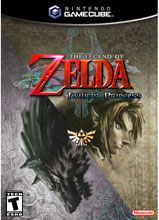 I found this out when in the cave of ordeals and this works everywhere. If you are low on arrows and low on ruppees, or in the cave of ordeals and don't want to warp out and lose your place, find some bulbin archers. Stay in the outskirts of their range and when an arrow hits the ground run into it and steal it out of the ground! There is no limit as to how many arrows you can swipe from their failed shots!

Hit a chicken 12-15 times with your sword. It's funny. You then can can control the chicken with the control pad for 15 seconds. Try it yourself!

As most people know in the water temple there is a bug that hides in a bubble of water and you can't hit it, so just shoot him with a bomb arrow and the bubble will go away.

If you hit a bull in ordon ranch it will go into a fearsome rage and will charge at you but it won't hurt you at all.

Go to Death Mountain, then go to the springs and then there you have it. Hint: stay in there long enough you will be fully healed.

When you get your bomb arrows, go to the spirit spring and shoot at the big rock at the top right of the spring then use your gale rang to get it.

Before you battle the green guy that you knocked off a pig at the desert ruins, hit the pig thats roasting over a fire for hearts.note: you have to wait after you hit it to get hearts.

In Arbiters Grounds, when you are in the room with the Skeleton warrior, use the Bomb Arrows instead of using a bomb on his fallen body to kill it in 1 hit.

After you beat the first trail in the desert, you can come back and it will be much harder than the first trial. (More enemies, ect...)

How To Kill Ganondorf More Easily

Instead of going to the Castle Town to by the shield for 200 rupees, go to the Malo Mart in Kakariko after you have beaten the Goron Mines.

The six howling stones play six of the songs from Oot

There are two more hidden skills. They are both near each other and easy to get. The first one is at Lake Hylia. You can find it near the huge tower on top of the cliff. You can't get it right away when you are wolf or human form. After you defeat the water temple boss and get the master sword go back and climb up the ladder. Then Transform into wolf Link and howl the melody the golden wolf (aka the swordsman) should tell you to meet him near the entrance of South Hyrule. The second one is near the boat shop. Go to the edge of the first cliff to find the rock formation then howl the melody. After the golden wolf shows up do it again then meet the wolf in human form near South Hyrle entrence.

How To Get Hidden Skills

After you get the first hidden skill you will have to find strange rock formations that glow when you go near them. Have wolf link howl to the melody then you can find the Swordsman on a ledge outside the west hyrule entrance (you should see the glowing wolf and it's marked on your map). I where two are so far. The first strange rock is on the Goron Path in Kakoriko, and the second is somewhere by Lake Hylia.

If you climb up on the vines at the shop, you see a cat. First you have to get the fishing pole and get a fish and give it to the cat, the you can get the slingshot.

To put your sword away like you do after beating a boss press a while standing still. (Note: only works on some enemies)

When a boss can be hit or when he has shown his weak spot try jump attacking it and it will take down the boss faster.

Whenever you see a big flock of crows try taking all of them out and when you do you will be rewarded with rupees!

After you give a Goron at Kakariko's Malo Mart 1,000 rupees to fix a bridge, then give him 2,000 more to set up a new shop at the center of Castle Town, you'll be able to buy Magic Armor for 598 rupees. This armor is able to protect you from ANY damage. But the catch is that it uses rupees to funciton.

Agitha wants you to bring golden bugs to her party, there are 24 in all. If you bring her every single one then she will give you a GIANT WALLET which can hold an incredible 1,000 rupees.

To get the Hawk Eye, go to the Malo Mart in Kakirako Village when it opens!! It costs about 100 rupees!

In Central Town Square, go to the bottom left of that place and you will see a door. Go inside and you will see two Gorons. Talk to the big one and he will offer you a Hylian Shield. Be ready, it costs about 200 rupees!

Give Agitha a bug. She is in W. Castle town.

Guardians Of The Master Sword

This ONLY works after opening the malo mart in castle town. Go outside of castle town malo mart and there should be a kid outside, he'll talk about how dirty your boots are. He'll offer to clean them for 10 ruppees, give him 10 and he'll clean them, now you have shining boots! (Note: They'll stop shining after you leave the castle town center.)

We have no easter eggs for The Legend of Zelda: Twilight Princess yet. If you have any unlockables please submit them.

We have no glitches for The Legend of Zelda: Twilight Princess yet. If you have any unlockables please submit them.

Dungeon 7- City in the Sky Walkthrough

The Legend of Zelda Walkthrough

Submit a cheat for The Legend of Zelda: Twilight Princess