Get the latest The Suffering cheats, codes, unlockables, hints, Easter eggs, glitches, tips, tricks, hacks, downloads, hints, guides, FAQs, walkthroughs, and more for Xbox (Xbox). CheatCodes.com has all you need to win every game you play!

Use the above links or scroll down see all to the Xbox cheats we have available for The Suffering. 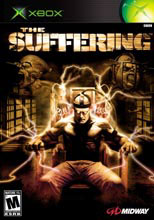 Defeating Creature At The Dock

Use the following trick to defeat the creature on the last level at the dock. The big creature will smash open a gate that has a control device that will lower a machine that shoots out a purple beam. Dodge the creature's attack and stand so a beam will hit you. There is a delay between beams. After being hit, you will glow. Press R1 to throw a glowing ball. Aim for the red spot on its chest. Keep throwing balls until the creature falls in the water. If you cannot throw any more balls, stand under the beam to recharge.

First, turn off all four pipes leaking green gas in the corners of the room. Then, shoot the rope tied on the wall, near the far end of the room, to drop the box hanging from the ceiling onto the vent that the green light is coming from. Then, shoot the other rope tied to the wall near the railed door to drop the covering to the vent. The last vent covering is in front of boxes which will explode when you shoot them. After these vents are blocked, drag the box over the vent nearest the dead inmate. Next, wait for him to get in front of the fireplace and take the from of a man. When he does this, turn the crack so that the gas pushes him into the fireplace. Then, run over and shut the door.

To kill the Fire Ghosts, first reduce them to an ash pile. Then, shoot the pile of ash to finish them off. Otherwise they will come back and gang up on you.

To get more ammunition for the revolver that you get in the beginning, instead of waiting for the person that you find to die from the electric chair, kill him with the sickle that is found in the cell. The gun will have a lot more ammunition.

Successfully complete the game, then start another game to view an alternate introduction sequence.

There are two references to a song by the band Tool called "Ticks and Leeches". Early in the game look closely at one of the walls. You will see the words "Ticks & Leeches" which references the song. This is not a coincidence, as later in the game, about where the Noosemen appear, written on the wall are the words "Suck Me Dry", which is a phrase constantly repeated in the song. Also, the phrase "I hope you choke" or "I hope you choke on this" can be found written on a wall some time before the gun fight with the guards and the man with the gun turret. This is also part of that song.

After you leave the Asylum where you do all the tasks with Doctor Killjoy, you will be in an area which has what appears to be a nine-step staircase. Walk up it and follow the wall. Sou should run into an opening that has walls made of some type of vegetation. You will hallucinate and see images of your children. As you follow them, they will run down one way. While continuing to follow them you will encounter a corpse that is sitting up against the vegetation wall, with an axe laying beside him. This is a reference to The Shining, where Jack Nicholson is chasing his son through the labyrinth and dies against one of the walls inside. Note: The Shining was also mentioned in the game's bonus material.

When you are in the abandoned World War II bunker, you will encounter a desk with three phones. Two of them are are green and the other is red. Pick up the red phone first and you will hear the a girl's voice say "You will die in seven days". Also, in Chapter 15 (An Eye For An Eye Makes The World Blind), as you come from a staircase with two small Slayers and one large Slayer, you will find yourself in a small room with white walls and a few dead COs on the walls. There will be a phone next to the door you need to go through. Pick it up, and one of the Inferna Girls (the small girls in the pink nightgowns) will say, "You will die, in seven days."

Press Reload then do a dive. Your revolver will be reloaded in one second.

To get more ammunition for the revolver that you get in the beginning, instead of waiting for that one person you find to die from the electric chair, kill him with the sickle that is found in the cell. The gun will have a lot more ammunition.

On your way to help the cop get to the Radio station, their will be an endless amount of Slayers jumping out of the trees. Keep killing them in Insanity mode until the experience bar will not fill anymore. Stop the slayers from appearing, shine the spotlight on the tree.

To get the lighthouse gears to turn, throw a stick of dynamite at the handle. After this is done, Torque will be able to turn handle.

Successfully complete the game, then start another game to play a "bonus level", which is the original introduction sequence with "director's commentary".

During gameplay hold L+R+X and enter Left, Left, Down, Up, A. A message will confirm correct code entry.

During gameplay hold L+R+X and enter Left, Left, Up, Down, Right, Left, Right, Right, A. A message will confirm correct code entry.

During gameplay hold L+R+X and enter Right, Right, Down, Up, Left, Right, Left, Left, A. A message will confirm correct code entry.

During gameplay hold L+R+X and enter Down, Down, Down, Up, Up, Up, A. A message will confirm correct code entry.

We have no unlockables for The Suffering yet. If you have any unlockables please submit them.

We have no easter eggs for The Suffering yet. If you have any unlockables please submit them.

We have no glitches for The Suffering yet. If you have any unlockables please submit them.

We have no guides or FAQs for The Suffering yet. If you have any unlockables please submit them.

Submit a cheat for The Suffering