Use the above links or scroll down see all to the PlayStation 2 cheats we have available for TimeSplitters. 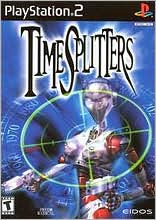 Equip yourself into the turret gun on Challenge 9C, by pressing X. This will help you defend your crystals much easier.

Challenges 4A And 6A

Challenges 4A and 6A do not unlock anything.

For a more powerful shot press R1 instead of R2 if you have the rocket launcher it will shoot 3 rockets at once. for the scifi auto rifle it will shoot Grenades.

Complete tomb on easy in under 55 seconds.

Ah, I'd pay big bucks for this Cheat! Hey, remember the Robofish? Turn this Cheat on and watch the glass shatter and the fish head hit the floor... Too cool (Unlock by beating the time limit in the 1950 village level on Easy)!

Like the Cheat implies -- headless people wandering around aimlessly -- just like we do at work (Unlock by beating the time limit in the 2020 Planet X level on Hard)!

All Enemies Are Robofish

I just love an enemy with a fishbowl for a head -- don't you? Too bad you can't shatter the glass and watch the fishie wriggle on the ground (Unlock by beating Challenge 3B -- Story Mode only).

All Enemies Are Ducks

This fowl (ouch) Cheat turns all of the enemies into a bunch of quackers (double-ouch) (Unlock by beating Challenge 2B -- Story Mode only).

Ever wanted to throw a brick at a moving cookie? Only TimeSplitters gives you the pleasure (Unlock by beating Challenge 7B (Story Mode only).

All Enemies Are Bunnies

Same deal -- but all enemies are bunnies with breasts -- Disturbing? Yes, yet interesting all the same (Unlock by beating Challenge 8B -- Story Mode only).

All Enemies Are Impersonators

With this Cheat enabled, everybody on screen looks like the King (Unlock by beating Challenge 5B -- Story Mode only)!

This Cheat will allow you to get in a brick fight (Story Mode only) with your enemies (Unlock by beating Challenge 4B).

Use this cheat to exclusively use the Rocket Launcher in a level (Unlock by beating the time limit in the 2005 Cyberden level on Hard -- Story Mode only).

This cheat allows you to turn your gun sounds to wacky animal sounds (Unlock by beating the time limit in the 1970 Chinese level on Normal).

Ah, nothing like watching a friend's paint splatter (Unlock by beating the time limit in the 1935 Tomb level on Easy).

Yep... All the ammo you can shoot (Unlock by beating the time limit in the 1985 Chemical Plant level on Normal)!

All enemy weapons look huge (Unlock by beating the time limit in the 2000 Docks level on Normal).

All characters have heads smaller than normal (Unlock by beating the time limit in the 2035 Spaceways level on Hard).

All characters have heads bigger than normal (Unlock by beating the time limit in the 1965 Mansion level on Easy).

For each level you complete on medium, a new arcade level will open up such as the graveyard if you beat the tomb on medium.

In arcade mode, set your weapons to "custom" but don't set any. Leave them blank, set the rest of the match as you wish, when you enter the match, you start with pistols and the bots are frozen. Open Season! It helps when earning awards.

1. Always have weapon change at "never" because while you are legging it to the exit shootin your way through endless amounts of splitters, you don't want to have a shotgun equipped and suddenly walk over a pistol to suddenly change weapon! 2. In some levels some things are explosive. try shooting everything at first. eg: say someone was behind a wall. you knew they were there, you just couldn't see them. there is a barrel near the wall. if the barrel is close enough, blow it up and it could kill the guy behind the wall. 3. You don't always have to fight. take the mansion level. you walk into a room, and the dear heads start shooting at you. they are incredibly hard to kill. remember, you don't HAVE to kill them. take a zombie. you can only kill it by shooting it in the head. shooting it anywhere else will stun it. if you are cornered, stun them all and leggit. they aren't smart enough to follow you. 4. If you stun a zombie when you were aiming for its head, it can still be killed whilst it is recovering/lying on the floor. you don't have to wait for it to get up again.

Beat all of THESE Levels on the Easy Difficulty to earn Challenge Mode. 1935: Tomb 1970: Chinese 2005: Cyberden 1950: Village 198?: Power/Gas Plant 2020: Planet X After u beat these 6 levels, the choice is up to you to play the next 2, but you don't have to to unlock challenge mode. All you have to do is beat the last level, 2035: Spaceways. I Skipped the Docks and the Mansion and just beat Spaceways and i still got it, so u might ought to try that.

Lists Of Things That Can Be Unlocked

Get Additional Levels And Characters For Arcade Mode

Use story mode to finish the first three levels.

Use story mode to finish the 2005 Cyberden level on easy difficulty.

Use story mode to finish the 1935 Tomb level on easy difficulty.

Use story mode to finish the 1970 Chinese level on easy difficulty.

We have no cheats or codes for TimeSplitters yet. If you have any unlockables please submit them.

We have no unlockables for TimeSplitters yet. If you have any unlockables please submit them.

We have no easter eggs for TimeSplitters yet. If you have any unlockables please submit them.

First go to arcade. Then go to where it says map maker. After you get the screen where you can design your own map,select where it says tiles. When you get on the opening screen there is a big list of the tiles you can choose from. First go to the second page (press o) there will be a really big room that stands out. Pick that 1 and then and put it on your map. Build any thing else you want around it. After it is built and saved put the setting on industrial. Dont put any bots on just so you can find the secret easier without dying. Once your in the level that you built go to where the big room is. Go diretly to where you are facing the rocket perfectly looking straight at it. 2 the top right is the sniper post if that helps.Take a left and walk all the way down to where the wall ends (there is a ramp 2 the right which leads to the sniper post DONT GO UP THAT 1). once you hit the wall look to the left and you will see the ramp. Go up it and make sure you dont fall off. Go to where you see a beam walk slowly across the beam until u reach the wall (duck if needed to see if you are going to fall off or not).Once you reach the end of the beam lightly go to the left and you should fall outside of the level you have built. You can now see only in the big room even though you are not in it. When you out there you are able to shoot in at everyone but they cant shoot you because they cant see you. Good way to trick your friends in arcade mode.

We have no guides or FAQs for TimeSplitters yet. If you have any unlockables please submit them.

Submit a cheat for TimeSplitters