Use the above links or scroll down see all to the Xbox cheats we have available for Tom Clancy's Splinter Cell: Pandora Tomorrow. 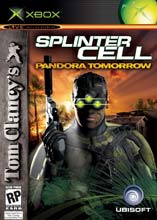 Multiplayer: Talking To Teammate After Losing

When your online playing in a match and lose all your lives and your teammate is still alive, when your partner dies quikly add him to your friends list, then take him off. Then you should be able to talk to him in the game and help him.

On the last stage (Los Angeles Airport) after you get through the parking garage you come to a room with a guard in a booth to your left and a female janitor right in front of you. In this room you have two options to advance. #1) The first option is to go through the guards booth by either luring him out and then running in before the door closes, or use the door code(its either 1387 or 1687). #2) The second and eaiser option is to go into the bathroom opposite the guard booth and climb through the vent in the wall this will take you to the same place as the other way and you won't have to deal with the guard.

On the mission when you are on the train, look in the second car where the guard is located. Knock him out then go behind the fenced door. Look down you will see a magazine featuring Prince Of Persia. Also, on the third level when you are in Paris on the train, at the beginning there will be a room with an engineer. Knock him out. On the floor of the room is a Prince Of Persia strategy guide.

After you have climbed up the elevator cables and have gotten on top of the other elevator, crawl through the hole in the wall. Norman Soth and two other mercenaries are on the top pathways. While in the hole, there will be one guard on the top path, slightly to the right. You should be able to shoot him in the head. Then, a timer will start and you will have one minute to kill Norman Soth and his other mercenary. When you shoot the first mercenary, drop out of the hole onto the first pathway. The second mercenary will go to exactly where the you shot the first mercenary. Shoot the second mercenary in the head. Note: The second guard will be aiming at the hole, so he will not see you if you drop out of the hole. The last person to kill is Normon Soth. Start running down the pathway and turn left on the second to last walkway on the left. Look up and turn on your thermal vision. You will see Normon Soth. Get a clear shot and shoot him in the head. After that you must retrieve the smallpox box from the top pathway. If you are on the second to last pathway on the left, go up the ladder. There will be another ladder; use it to climb up. Drop off the ledge onto the pathway. Run down the middle pathway to find the smallpox box.

To whistle, press Black. This will usually make a guard approach the sound. Note: Hide in a dark area and whistle, then jump the guard when he stops.

To move quieter, crouch down and walk slower. This will make your steps softer, and keep you undetected to a limit. To decrease your chances of being seen, shoot out the lights with your gun. Be careful, as if there is an enemy is under that light they may see you shooting it out.

To knock out a guard without using a Sticky Shocker or a Air Foil, shoot a Sticky Cam at their head. Note: It must hit him directly in the head for the guard to get knocked out.

On the train stage after you climb up from under the train you usually have to go around the outside of the train by way of the side door. But that can be very difficult since if people in the train see you the mission is over. An easier way is to turn off the lights by using the switch outside of the room where you climbed into the train from. Once th elights are off one passenger will come to investigate but if you hide behind the last row of seats you can knock him out easily. After that you can just walk through the car past the terrorists and all. (If you want to once you get to the other end of car you can lure the terrorists to you by whistling and then knocking them out. Just make sure they don't trip an alarm.

On the third part of the Jerusalem stage, once you go down into the underground base all of the walkways are metal gradings, most of which you can go under. This is very helpful since there is a lot of people in a small area, you can just shoot someone and duck under the gradings. Even if they see you they can't shoot you through the gradings. So you can hide until they forget about you and keep repeating the process until all the enemies are dead.

When playing as a merc, press and hold X to change your rate of fire (ROF) to Burst. To change it back to Auto, hold X again.

We have no unlockables for Tom Clancy's Splinter Cell: Pandora Tomorrow yet. If you have any unlockables please submit them.

We have no easter eggs for Tom Clancy's Splinter Cell: Pandora Tomorrow yet. If you have any unlockables please submit them.

We have no glitches for Tom Clancy's Splinter Cell: Pandora Tomorrow yet. If you have any unlockables please submit them.

The first part of the first level....

Created by: The gaurdian. Read the full guide...