Use the above links or scroll down see all to the Nintendo DS cheats we have available for Transformers: Autobots. 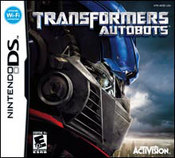 How To Get The News Choper

At the Casino Strip, climb onto the tower that looks like the Space Needle (It should be at the bottom-right of your map. Once you get up there, look around there should be a pool. Jump down to it. At the side there will be the news chopper.

To Get The Raider

In tranquility at the docks there is a circle of trailers climb to the top. Then scan the car.

I don't know if you need an action replay for this to work, but, first off, complete the game. Then, play as any autobot BUT the create a bot. Play around for a bit, exit, then go to the replay missions screen. Go to the level "Information Super Highway". You'll play as the bot you used (this also works on the decepticon level where you destroy those cops for barricade).

Dogde all the missiles, and shoot him with the laser, when he transforms, shoot and punch. He's so slow he won;t even hit you. Then then repeat the first thing. Strafe and shoot, ONLY , the when he's in tank mode, hit him with tanks Shoot and hit him with trees and poles, use the drones as health, you'll fail a couple of times, but you'll get the hang of it.

Revenge Of The Autobot

Have a new save file and beat the game, and right after, do the mission endgame. Use the car racer. (note - this is EXTREMLY! Rare, but it works ) after the dialouge between prime and megatron about your autobots death, you may see your autobot fight megatron instead of prime. It's so much easier, but if it works, that i'll the the last time that it happens.

In the mission downtown blackout, shoot blackout with ratchet's laser and dodge all missiles. In the second part of the fight, you can punch him once or twice and run and shoot so blackout won't hit. In the 3rd part, repeat what you did in the 1st part.
When fighting brawl, at first shoot him, that's it. Then when he transforms into a tank hit him with other tanks.
Start with your autobot to hit him in the back, when he drops the allspark, grab it and hit him. The autobot then dies. Now. . . Shoot missiles then when you run out of ammo, hit megatron with something. Repeat until he dies. Every once in a while kill an exoskeleton drone for health.

How To Get The Police Helicopter

To beat Barricade, transform into the car and drive by. Shoot and ram him along the way.

How To Get Stealth Chopper

On the level where bumblebee has to destroy the defenses, get past the road blocks and get to the dock. Ther should be black copters, transform and then scan the chopper. It should be the stealth chopper.

Once you beat the game, you will unlock a green and yellow truck called the maintenance truck.

We have no easter eggs for Transformers: Autobots yet. If you have any unlockables please submit them.

We have no glitches for Transformers: Autobots yet. If you have any unlockables please submit them.

We have no guides or FAQs for Transformers: Autobots yet. If you have any unlockables please submit them.

Submit a cheat for Transformers: Autobots