Use the above links or scroll down see all to the PlayStation 2 cheats we have available for Transformers. 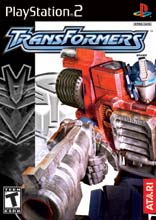 Use Optimus Prime or Hotshot. Use Flashbang. Get cover, then shoot it.

Tidal Wave is the fourth boss. His only weakness is his head. Equip Lookout, Rangefinder, and any blaster. First, get to the top of the rocks and shoot him with your blaster and Lookout's rifle. Then drive to the other rock pile across the beach. When you get there you should have enough power for one sniper shot. Shoot him, then drive to the first pile of rocks and shoot him again. Repeat what you did before.

Cyclonus is the third boss. Immediatly activate Powerlinx and shoot him. Do the same thing when he becomes a robot. He'll eventually throw you off the Sun Temple. Do what you did on top of the Sun Temple. Stop using Powerlinx when you have less than half of your health. He is very strong.

Megatron is the sixth boss. You need Optimus, Comeback, Firefight, Fullspeed, and Flashbang. When you start, shoot him with your blaster and run away at the same time. When he charges up his big laser, jump away and shoot him with Flashbang. He'll become a tank soon. Shoot him while using the shadows to avoid the lasers he shoots in the air. Dash whenever you can. Make sure you take away about half of his health before Comeback activates. This battle is even more difficult than the one with Unicron, so keep trying!

Starscream appears again as the fifth boss. Shoot him until he becomes a jet. Shoot him out of the sky while avoiding his fire. Then you just have to keep shooting him. The only real difference from the first battle is his cannon attack: He'll jump up and charge his shoulder cannon. Shoot him with everything you have to make him fall down. If you don't, he'll shoot out a strong energy attack. Just keep trying and you'll beat him.

Starscream is the second boss. First, shoot him until he transforms into a jet. Then it gets hard. Use Highgear to dash away from the jet's fire. After doing enough damage he'll become a robot again. Repeat.

The Heavy Unit is the first boss. Use Optimus or Hot Shot. Be sure to use Flashbang. Use the walls for cover, then shoot it. When it lifts it's foot up, jump to avoid the shockwave. After you beat it, you go to Antartica.

First beat the Pacific islands level, then get 30 minicons. Then you can enter the Cybertron level where you will fight Unicron in his planet mode.

At The Autobots HQ Enter L1, L2, Circle, Circle, Square, Circle, L2, L1. If you do it correctly you should hear Red Alert say "code accepted"

At the Autobot headquarters menu, press L1, R2(2), Square(4), L1. If you entered the code correctly, a message will appear.

How To Override The Overheat Setting (Minicons)

Pause the game and press Square, Circle, Square, Circle, L1(2), L2, L1. If you entered the code correctly, a message will appear. Note: This must be done each time you enter a new level or leave a level and return.

At the Autobot headquarters menu, press Circle(3), Square, L1(3), L2. If you entered the code correctly, a message will appear.

We have no unlockables for Transformers yet. If you have any unlockables please submit them.

We have no easter eggs for Transformers yet. If you have any unlockables please submit them.

We have no glitches for Transformers yet. If you have any unlockables please submit them.

We have no guides or FAQs for Transformers yet. If you have any unlockables please submit them.

Submit a cheat for Transformers