Use the above links or scroll down see all to the Xbox 360 cheats we have available for Viva Pinata. 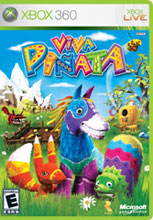 Feed the worm a turnip and it will change colors.

I hate the professor and his ruffians destroying my garden. To get rid of them buy the captain cutlass. You will never see one again. You have to be at a certain level to unlock it. It does cost a lot of money. Save up. (it only works for the garden it is in. Yes you can move it to another garden. For more help go to Viva Pinata help. Com.

How To Get A Pigxie

First, you need to romance a swanna and a rashberry once with their own species, then you will need to either sell or destroy both the rashberry and the swanna home, then you will need to buy a mystery home (a pigxie home but it says mystery home) then give the swanna and the rashberry each a romance candy, then romance them. You will get a pigxie! (You will have to do the maze and watch the video as normal) You will also get an achievement for cross breeding the two.

Have two Syrupents romance. When the egg is delivered, wait for it to do a big jump before hatching, then hit it with your shovel. If you hit it at the correct moment, you should now have a Two Headed Syrupent. To get the Four Headed Sryupent, have the Two Headed Syrupent romance. Do the same thing with the egg as before with the shovel.

Insta Fertilizer For Any And Every Plant

Get an alligator pinata by taming a sour gator, when it turn's green click on it then the plant you want fertilized. The gator will cty on it thus fertilizing it, you can only fertilize three times though.

Direct a sweettooth to a blue bell (fully grown) or blue bell flower head it will eat it and it will turn blue.

How To Get A Two Headed Snake

First of all you need two snakes and they have to have a baby then when the EGG is jumping high hit it with your sovel and it has two heads you can do the same thing with the two headed snake to get a four headed snake you CANT get a eight headed snake so don't try it!

How To Get A Gold Bunnycomb

All you have to to is grow or buy a pumpkin and feed it to a full grown bunnycomb and it will turn gold.

How To Get A Sweetooth; The Easy Way

First you have to get a Bogesicle. Then tell it to walk into some water. If it walks all the way across and if the water is deep enough it will turn into a Sweetooth.

Get A Redd Hott

Lead a taffly to a Firebrand. It will go through the firebrand if it is turned on. Take out your watering can and than select long pour. Pour the water over the taffly and the value will increase 1500.

Need to give your Horse Pinata a toffee apple, but don't know how?? Well, all you have to do is either buy or grow an apple, the go to Bart's Exchange go to gold Bart head and have Bart tinker with the apple and it will turn into a Toffee Apple. Trust me, it IS SAFE to feed your Horsachio this!

How To Keep Out Ruffians And Professor Pester

To keep Ruffians and Professor Pester out of your garden forever all you have to do is the buy the Captain Cutlass item from Ivor's Shop. (You must be level 30 or higher to be able to get this item.)

To get all of the different Flutterscotch colors (red, blue, black, green, pink, and purple) you have to feed a white flutterscotch a specific flowerhead:

Keep in mind that once you mate two of the same color, their offspring are white flutterscotches.

Get one of you Badgesickles to eat an apple and they will turn red!

Get Ruffians out of your garden ASAP! Sometimes they will destroy houses and when they're doing this you can't do anything about it. The best thing to do is sell the house before they destroy it and then whack them with your shovel like ten times.

This is simple, though you may need a bit of experience to do it right. All you need to do, is take a fruit or vegetable and get a Taffly to eat it. It'll turn into a fertilizer that can be used to grow that plant. However, some fruits and vegetables will not turn into fertilizer.

First buy a blackberry. Then tell Bart to carve it and it will turn to black berry jam.

Every time Seedos comes, talk to him after a few times he will give you a new seed.

Name your garden chewnicorn, goobaa, kittyfloss, or Bullseye to get extra accessories at the shop.

How To Get A Yellow Flutterscotch

Feed a white Flutterscotch a buttercup an it will turn into a yellow Fluterscotch.

Feed a banana to a Salamango or a Juicygoose and they will turn yellow.

Feed a newtgat a bluebell and it will turn blue.

Get the squazzil (the squirrel) to eat a blackberry and it will turn blue.

Feed the lickatoad (the frog) a blackberry and it will turn blue.

Feed a Shellbean a goose berry ant it will turn green.

If you feed a pretzel a bluebell it will turn blue.

How To Get A Juicygoose

Feed a quackberry a gooseberry.

Feed a cinnamonkey a chili and it will turn red.

Feed a sparrowmint a buttercup and you will get a candary.

Feed a newgat a chili and it will turn into a salamango.

Make a Barkbark (dog) eat a poison ivy flower and it will turn green.

Give a Horstachio (Horse) a bluebell flower, (make it eat it) and it will turn blue.

Give a Pudgeon (Pigeon) a Bluebell flower head, (make it eat it) and it will turn blue.

Make a shellybean eat a bluebell flower and it will change to blue.

Grab a Quackberry, (The duck) and get it to eat a gooseberry, (a fruit you can grow or purchase) and it will transform into a purple Goose-like pinata.

Feed a Taffly the flowerhead from a poison ivy plant, and it'll turn green!

Give a Pretztail (The Fox) a Bluebell Flowerhead, (Make it eat it) and it will turn Blue.

We have no easter eggs for Viva Pinata yet. If you have any unlockables please submit them.

We have no glitches for Viva Pinata yet. If you have any unlockables please submit them.

We have no achievements or trophies for Viva Pinata yet. If you have any unlockables please submit them.

Submit a cheat for Viva Pinata