Use the above links or scroll down see all to the PlayStation 2 cheats we have available for Wallace and Gromit. 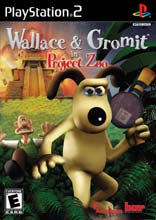 On the ice level, there are three caged Polar Bears that you have to free. The first one is close to the platfirm over the steam jet where Wallace is. Go to the top of the tower with the rotating platforms near Wallace, and aim down at the handle that's above the pole that the cage is hanging from. (it's near the base of the tower) Shoot it three times to lower the cage to the ground. The second one is on a cliff behind a frozen waterfall. Once you get wallace to fix everything at the top of the tower. you will find a switch that will make a pipe shoot water into a pool above the cliff causing the pool water to flow over the cliff, revealing the caged polar bear cub. When you cross the side river in the cave, go to the other side where there will be a few pressurized switches. Jump on them all before the timer goes off, and a rope will lift the third caged polar bear cub out of a big metal box.

When Wallace and Gromit get to the Octave Security in Act 4 Part 1 of the Warehouse level, shoot the large padlock on the big gates with the turnip launcher. Afterwards, when Gromit walks up to the large keyboard on the floor of the room, the keys on the keyboard demonstrates the sequence of notes/keys that Gromit should stand on. It is quite fast and a light comes on above the keys, but not necessarily above the key that Gromit needs to stand on. Also, there are three notes, then four, and finally five. When Gromit stands on the first three correct keys, the next sequence will be quickly be demonstrated, and the same happens with the third and final sequence. There are eight keys on the keyboard. The first sequence is 1 2 4. The second sequence is 5 3 6 5. The final sequence is 4 6 7 5 3. Wallace and Gromit can now go through the doorway to the next level.

Most enemies can be destroyed with Gromit's hand to hand combat moves. Use them instead of your weapons. You might need to stockpile ammunition for other tasks.

After you rescue the baby, go to the area where the elephant has knocked down the doors. To the left of the doors leading to the next part of the jungle is a water chute. Jump into that water chute and go into the hole. You will reach a bonus level.

Coins and Tools will make magical chime sounds when you are close. Look around using L1 and L2 if you do not see them the first time.

Gromit automatically sights enemies in third person view. When you hold the L1 + L2, the auto- aim is turned off, allowing you to aim for distant or difficult targets.

To destroy a spike ball, perform a smash jump on it a couple of time, and they will explode. For the giant spike balls, you will need to to this a few times. Just make sure that you don't do it while their spikes are sticking out.

We have no cheats or codes for Wallace and Gromit yet. If you have any unlockables please submit them.

We have no unlockables for Wallace and Gromit yet. If you have any unlockables please submit them.

We have no easter eggs for Wallace and Gromit yet. If you have any unlockables please submit them.

We have no glitches for Wallace and Gromit yet. If you have any unlockables please submit them.

We have no guides or FAQs for Wallace and Gromit yet. If you have any unlockables please submit them.

Submit a cheat for Wallace and Gromit