Use the above links or scroll down see all to the Wii cheats we have available for Wii Sports. 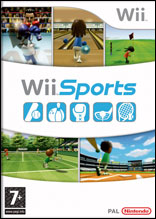 No Points Taken Off

In tennis, boxing, or baseball, if you lose, before it says you lose, hit the + button. You won't lose points!

Become A Pro At Boxing

If you move the wii remote like you are playing the drums you will punch the person and they won't get many punches off. And you can become a pro easily.

Once you select Tennis from the Wii Sports main menu, select your Mii and once you get to the warning screen, hold down 2 and hit A to use the blue tennis court.

To do this, hold the Wii Remote sideways with the buttons towards you. Then, hold B, swing down, up, then down and let go. Align your Mii all the way to the right with the aim over the second arrow. (Note: This may require some practice. ).

How To Get In The Bowling Lane Next To You

If you throw your ball at the white part of the divider next to the gutter, you will go to the lane next to you.

To bowl straight hold B and let go of it when it's over your head. It might take a couple of tries to get it right.

In baseball, you can throw submarine by pressing 2.

Playing With Both Players

When your playing one player in any mode in tennis, press B to make your front teammate hit/swing at the ball

Become A Pro In Boxing Easily

All you have to do is dodge all of the hits and when it goes slow mo you hit at the face or at the sides or an uppercut (etc. )it may take a couple of tries but it will get you up to pro.

There are two ways for easy bowling and going "pro" fast;
#1. Aim straight down the lane, press and hold B, and start to swing your arms normally. But instead of throwing the ball, let the ball go all the way up to the sky, then swing your arm back down and it won't come back down, then swing your arm forward really fast and release B and your ball will go perfectly straight and get a strike almost all the time.
#2. Move your Mii all the way to the edge of the lane, but be careful not to put it in the gutter. Then start to swing normally, but instead of going slowly and following it through until you release the ball, making it go straight, swing really fast and stop right at where your thigh is. (making sure to spin the ball to the RIGHT. ) This one's a little harder, but it will get you a strike almost every time.

After selecting your mii hold 2 and press a at the warning screen.

After you've beaten the grand champion, Matt, in a boxing match you'll be able to wear silver boxing gloves to do so, hold (1) when the screen becomes black before a boxing match.

To get a full strike on the last of the Power Throw (bowling) training, press A and change the angle. Make the turn as small as you can. Then go to the right as far as you can and throw the ball (make sure you throw it high). It should make an exploding sound and all the pins should fall.

All "91 Pins" Down in "Power Throws" In Training

Note: this cheat only works on the "91 Pin" stage in "Power Throws." Move sideways all the way to the right then until it doesn't let you move anymore to the right, move one notch over to the left. Then press "A" and move two or three notches to the left. Then press "A" again and go all the way to the right. Then without any curve or spin throw the ball. If you do this right, the ball will balance all the way down the side and casue a big "earthquake" casuing all the pins to fall down. This is hard to do so it may not work always, try to find your own way close to that and you should be able to do it good.

When you are about to swing on Wii Sports Golf, press 1 to see the ground in a level layout. Press 1 to return to normal view.

In the tennis practice that contains the wall, keep hitting the wall in one spot, until there's a hole. After that, keep moving to the side. And if done correctly, there will be a floaty wall.

So i'm playing Wii Sports Boxing and both me and my opponent (Kathrin) have just 1 piece of pie left and we both hit each other at the same time and there is only one clock so if one dies the other does too.

You can spectate in tennis by putting all computer characters and you won't have to do anything but watch a good game of tennis.

To do this, throw submarine (press 2) or overhand and, depending on which side the batter is standing, throw a curveball while holding down either left or right on the D-Pad. (Note: For better curve, throw slower, but it may hang over the plate. ).

On the main menu, select: Bowling. Then choose your Mii and all that stuff. You know your supposed to raise the Remote, hold down B and do the bowling motion where when you bring your arm back and then bring it forward and release B when it's at your legs. Well instead...the first time you bring your arm back, you let go of B as it is passing to go behind your leg. You should see the ball go about 3 feet, then everybody behind you will jump up in a weird twirly motion as if they hate you for almost hitting them. This may take a couple times to master.

Sometimes in golf, when you look up at the wind meter, it will be blowing a certain direction. Switch your angle a little bit the opposite way of the wind, and the wind will blow it to the other way. Note: Only useful when putting from a pretty far distance.

How To All Strikes In Bowling

In pin number 1, put the ball next too pin number 1 and then throw it. You'll have a strike most of the time.

How To Get Pro In Bowling

All you have to do is to get a score of about 170 or more every game and you will get pro status in about 12 games.

Be All Four Characters In Tennis

When you go to the menu where it says, single game, best of 3, and best of 5 click on the characters that have the question mark on it and then you're set.

Before you start a 1 player tennis game, put 2 of yourself on the same team and if you win, the points you won will be doubled!

The best way to never lose skill points is to push the plus button (if you lose) and then click on start over. (It takes a bit for the game to pause when you are playing baseball)

While batting, as you hit the ball go in an upwards motion. You are more likely to hit a home run.

To knock down all 91 pins on the "power throws" training game, roll the ball all the way down the lane on the bumper. It must go all the way! This may take a few tries but when you get it, there will be a boom and all the pins will fall down.

While playing the target training for tennis, keep hitting the wall in 1 spot. You can bust a hole in it and if it goes through the hole it cancels your game and records whatever score you had.

When the ball hovers at its peak height after being tossed up, hit it with as much force and forward wrist movement as you can. If you do it right, the ball will serve faster than normal and you will see smoke trails.

When on the black screen after selecting your character press and hold 1 and 2. You will have the blue practice court (it doesn't effect gameplay).

When aiming for the pins while first aiming, move all the way to the far right or left. Then, depending on which direction you moved, turn your bowler as far as you can go in the same direction and your target will be in another lane.

Knock Down All Pins In Bowling Training

When on the final lane of Power Throws during Bowling Training, move all the way to the right (or left, depending on which hand you use). Turn toward the wall two to four notches then release the ball on top of the wall. If done correctly, you will hear a click and an explosion, and all the pins will fall down from the shockwave.

To get a "Super-Pro" status in bowling that comes with a shiny gold ball, achieve a skill level of 2400 or higher. This ball goes faster and spins better than a PRO ball. (Note: This status says PRO, but it is a Super PRO because of the skill level. Also, this ball is not the same as Player 4's ball.)

When starting a game of bowling, hold the D-pad in one of the following directions to change the color of your bowling ball: up for blue, left for red, down for green, and right for gold.

In the "Power Throws" training game for bowling, you might notice 2 red buttons at the far end of the alley- 1 on the far left side and another on the far right side. When you get to the final bowl for 91 pins, you can bowl the ball along the top of the barrier on either side and hit this button. To do this, move your Mii all the way to the left or right, and turn the aim 2 or 3 notches towards the barrier. Let go of the ball at the highest point possible, with just a bit of spin to keep the ball on the barrier. If you successfully hit the button, you will hear a click, the screen will shake and all the pins will fall over. (NOTE: This may require some practice - and it only works on 91 pins).

Go to tennis and select your player now before you enter hold down 2 and press A until you get to the tennis court where you select how many rounds you want.

No Maps Or Meters On Screen In Golf

When making a choice at the course selection screen, hold 2. The power meter, map, and wind speed indicator will no longer appear.

Achieve the Pro level to unlock a bowling ball with diamond designs.

Beat all boxers including Matt (the last one) and you get silver boxing gloves.

If you become a pro in tennis, you get a silver racket.

When the game type screen is loading, hold 2 and you will play on the training tennis court.

To unlock the gold baseball bat in baseball get 1000 skill points (pro) and get at least 1 home run in each match!

We have no easter eggs for Wii Sports yet. If you have any unlockables please submit them.

We have no glitches for Wii Sports yet. If you have any unlockables please submit them.

Submit a cheat for Wii Sports