Use the above links or scroll down see all to the Xbox cheats we have available for WWE Raw 2. 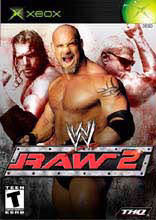 If you can steal from a wrestler three times you will unlock their Titantron movie.

When you are in a match and have COUNT OUTS ON, you can run outside the ring. Your opponent will follow you. You can make him/her come after you if you stay out and run around the ring. Your opponents will just get back in the ring. He/she will come back out and you have to make him/her chase you some more and then get in the ring and your opponent should stay out there for a second and then try to get back in but then it will be times up. Then, you win!! NOTE:YOUR OPPONENT HAS TO BE A COMPUTER AND NOT A PLAYER. IF YOUR OPPONENT GETS BACK IN THE RING, TURN AROUND WHEN HE/SHE IS CHASING YOU AND JUST RUN AND PUNCH UNTIL HES DOWN. USE THAT CODE WHEN ITS 7 OR 8 SECONDS LEFT.

When you steal from a WWE superstar it will usually work 89% of the time. If you get something you should get the WWE superstar's attire or video. If it doesn't work you will just walk away with nothing.

When you are up as high as you can go on the ladder, press A.

Use the steal option in season mode.

How To Steal Things

Whenever you have a match you should "Rest" before your match. When you are in your match and realize that you are losing then just fight him outside of the ring and let the referee count and when it has reached about 9 seconds run back into the ring and the opponent should get counted out and you will receive a win. Do this throughout the season. NOTE:You must pin or make him submit to win the title and to become king of the ring

Easy Win In Hell In A Cell

If playing in the Hell in the Cell and the option KO is on, its possible to get a quick win. Climb the cell and do a move to your opponent from the side of the cell (ex. chokeslam off the cell, etc.) Your opponent will be out cold and you will win.

Go to the bottom of the ring when your outside of the ring and go up to the ring and press "White" and eventually your character will go grab a weapon from under the ring. You can grab as many weapons as you want.

When in season mode and you want to steal something from one of the wrestlers, make sure that the wrestler you steal from is not a friend or a tag-team partner. Its easier to steal from your enemies. (WARNING: This does not always work. It works 85% of the time.)

All you have to do is get beating down by your opponent for about 2 minutes, after that, press start and choose BACK TO MENU, it should say that your the winner.

Another Easy Win In Season Mode

First, choose a wrestler that has some submission moves: (Kurt Angle, Chris Jericho, ECT.) Then when you go into a match, it should take about three or four times to make your opponent submit. This is very easy to do.

We have no cheats or codes for WWE Raw 2 yet. If you have any unlockables please submit them.

We have no unlockables for WWE Raw 2 yet. If you have any unlockables please submit them.

We have no easter eggs for WWE Raw 2 yet. If you have any unlockables please submit them.

We have no glitches for WWE Raw 2 yet. If you have any unlockables please submit them.

Submit a cheat for WWE Raw 2