Use the above links or scroll down see all to the PlayStation 2 cheats we have available for WWE SmackDown vs. Raw 2006. 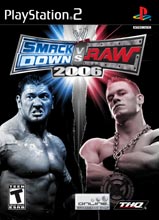 To play as Vincent K. McMahon, you must play through the general manager mode as RAW. Then during the wrestlemania PPV, McMahon will be a guest referee for one of the matches. Simply play the match and select McMahon as your character and you can play as McMahon. He does the McMahon stunner and some funny taunts. Note this doesn't make him permanetly playable, it's only a one time deal.

Hang With The Fans

To get into the crowd you must have the move Diving Side Kick as any superstars flying attack off the turnbuckle. Hard irish whip you opponent onto the barricades. Then get on the apron and use Diving Side Kick. You should be in the crowd.

Start a Royal Rumble as one of the wrestlers. If you get eliminated before the match is over, press the select button and you will suddenly start playing as one of the other wrestlers who haven't been eliminated. If it worked, you will see a 1P or 2P (1st/2nd Player)[Depending on what player you are] below the name bar of the new character that you became. You can do this as many times as you want just as long as your character keeps getting eliminated.

When you are playing at Wrestlmania 21 you will hear JR and King talking but Tazz and Michael Cole are sitting at the announce table.

If you have John Cena as the WWE Champion during a Royal Rumble,and his entrance is 1 of the first 2, he will have the Undisputed WWE Championship rather than his Spinner Belt.

Get Outside Ring In Cagefight

If you let your opponent get to the very top of the cage in a cage match, when he nearly has 1 foot over bring him down and you will be outside of the ring!

Win GM Of The Year Award

To do this, you must be a GM for both shows. This may take a while, but, hey, it's worth it.

In order to use a 619 without using a special, you must have The 619 as a finisher. When your opponent is groggy on the on ropes run toward him/her and press the X button. This 619 may not include West Coast Pop in it, but it does good damage to the head and knocks the opponent down for a little while.

Choose any character and choose "Vengence" as your Pay-Per-View, when you start the match Tazz and Michael Cole are your announcers when originally Vengence is a RAW PPV

To get the Wrestlemania IX arena you must beat the WWE Superstar Challenges.

First, create a super heavyweight and raise at least one of his attributes to 6. Then go to the create a superstar menu and copy him. Go to the copied one and change him to a diva weight. Then continue the game without saving. And you should have 7000 attribute points.

Play as Eddie Guerrero and beat the Smackdown season mode.

Complete both RAW and Smackdown! seasons and your attribute points for created wrestlers will stay at 999999 and will not go down.

How To Get ECW Arena

How To Get The Undertaker's Urn

How To Get Stonecold Steve Austin And Raw Season Trophy

How To Get The Rock And Smackdown Season Tropy

How To Unlock Hardcore Title

Beat all legend challenges and Unlock Mandkind in WWE Shop

Get Andre The Giant Without Buying Him

Beat the Undertaker in a buried alive match with Shawn Micaels.

Get The Elimination Chamber Trophy

Win an Elimination Chamber match on the Legend difficulty setting and eliminate all five superstars. (Which means be number one in the Chamber)

Get The General Manager Trophy

Successfully complete GM mode with a higher rating than SmackDown! or RAW.

Get The Legend Killer Trophy

Get The Match Veteran Trophy

Play in every match type in Exhibition Mode.

Get The Rising Star Trophy

Get The Royal Rumble Trophy

Get The Tough Enough Trophy

Get The Undertaker's Urn Trophy

Defeat The Undertaker in the Buried Alive match in Season Mode.

Get The Wwe Challenge Trophy

Successfully complete all of the set Challenges.

Get The Wwe Legend Trophy

Get The Wwe Superstar Trophy

Get The Raw Trophy

Get The Smackdown! Trophy

Get The Amateur Challenges Trophy

We have no easter eggs for WWE SmackDown vs. Raw 2006 yet. If you have any unlockables please submit them.

We have no glitches for WWE SmackDown vs. Raw 2006 yet. If you have any unlockables please submit them.

Submit a cheat for WWE SmackDown vs. Raw 2006