Use the above links or scroll down see all to the PlayStation 2 cheats we have available for WWF SmackDown: Just Bring It!. 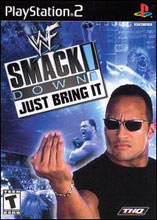 In the parking lot, to enter the Jeep or the forklift, press R1 near the door.

How To Unlock Tajiri

Tajiri will be unlocked after this

Use the Big Show and run up to your opponent and press X. The opponent will flip and you will get the 3 count.

To Cancel The Pin

When you are pinning someone press R1 and you will always cancel the pin.

While running or coming back from being whipped to the ropes, press L1 to do rolling dodge maneuver. This move is good for ducking clotheslines and high-flying attacks.

To get special intermission sequences in story mode, just choose one of the following wrestlers and follow the path to the WWF Title:

Unlock Shane O'Mac by unlocking 51 out of the 52 secret hidden cards in story mode. Then he will be used as a playable character.

Go to create a wrestler mode and select example 1. Then simpley name him Scorpian King and give him The Rock's moves.

First enter carrer with any carecter then turn down every single title shot in the end you'll be put in a battle royal win this and Jerry Lynn will be unlocked.

See What The Moves Look Like In Create Mode

This is for create mode only. Press square on the move you want to see and watch it.

This is how to unlock Jerry Lynn.

Choose anyone who does not hold a title. Say that you do not want to form a tag team to Vince. Run up and attack. Go talk to the ref, Earl Hebner and ask "Hi Earl how are you?". He will say that Regal wants you, and that he will take you there. Tell Regal that you want to go for the European title. Win the European title, and the match that follows. The InsurreXtion Arena (SmackDown! Card #11) will now be unlocked.

How To Get Spike Dudley

To get Spike Dudley, start a story with someone who dosen't have a title. Tell Vince that you want to go for the Tag Team Titles. Find a partner and win the first match (it's a Tag Team TLC). Then, when you're finding a partner for the 6 Man Tag match, go to the door across from the vending machines. You'll find Spike and Molly talking. Choose to help them from the Dudleyz. Win the Table match and the Tag Title match. Spike is unlocked.

When you win the WWF title at WrestleMania, you will unlock five additional movies in theater mode. The complete set of movies are:

Go the route to WrestleMania. During that route you will have a choice between three matches. Do this three times choosing a different match each time. Win the match to unlock Last Man Standing, Street Fight, and Ultimate Submission modes once you finish the story.

Choose anyone who does not hold a title. Say you do not want to form a tag team to Vince. Talk trash on mic, then say you want to kick his ass. Go to the parking lot to find Vince. Win the match. Show up on stage. Win the match. Then, win the WWF title at WrestleMania and the WrestleMania X-7 arena will be unlocked.

Eliminate 17 Superstars in the Slobber Knocker mode with The Rock.

Unlock all the secret cards and win the title match in story mode.

How To Unlock Mick Foley

Foley Will be unlocked

How To Unlock Rhyno

Rhyno will be unlocked after this

We have no cheats or codes for WWF SmackDown: Just Bring It! yet. If you have any unlockables please submit them.

Defeat fifteen wrestlers in slobberknocker with The Undertaker to unlock Fred Durst from Limp Bizkit.

We have no easter eggs for WWF SmackDown: Just Bring It! yet. If you have any unlockables please submit them.

We have no glitches for WWF SmackDown: Just Bring It! yet. If you have any unlockables please submit them.

TA Characters (Made up Ones)

How to get Special Intermissions

how to create the Turks

Created by: the code cruncher. Read the full guide...

Created by: Ighor is The Game. Read the full guide...

Submit a cheat for WWF SmackDown: Just Bring It!