Use the above links or scroll down see all to the Game Boy Advance cheats we have available for Yoshi's Island: Super Mario Advance 3. 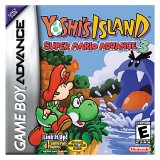 There is an extra tube (near that giant flower you make) go inside of it & you'll find layers & at the bottom there's evil guys. Make sure you get them all!

If you havn't noticed the shy guys on the right og the gennies vase, look. There will be two shy guys trying to push Yoshi and baby Mario of the side on the left. While the gennie spits out the three blue fire balls push the vase towards the right openning. When he finishes blowing the fire balls, go back toward the left opening to avoid his heaving push. Once the shy guys have been pushed off it should be easy!

How To Get Special Bonus Games In Each World

In each world you must get over 700% and you will get a special bonus game.

Immediately before completing the level, there is a bridge that bends. Get the two Red Coins, then go to the other bridge. After that go on the piece of land with a log sticking out of the ground. Stand on the edge of the log, then shoot an egg straight up. A spring ball should fall. Jump on it and you will go to a hidden stage through a pipe.

Grab a Melon Bug (the bug that curls when you approach) and take him to the Shy-Guy Pipe (where the Shy Guys appear from). Look up and shoot the bug. If done correctly, the bug should fall in the tiny space on the right side of the pipe, between it and landscape. Stand on the elevated surface and make sure you have no eggs. The Shy Guys will pop out towards you, but hit the bug. You will keep getting extra lives until you have 100. Then, get a perfect completion on World 5 and you will get the roulette game. If you get the X3; you will get 300 lives.

There is a location in the water in World 3-1 where you can go beneath a land mass to access a hidden area, by jumping off of a giant spring arrow. If you curve to the side and go above the normal hidden entrance, you should enter an area where you will be falling towards nothing. Keep going right (stay in the air as long as possible) until you reach the edge. You will be teleported to World 1-1 (and gain credit toward World 3-1) where you can gain more red coins and hearts than the maximum. It will only go to the top, but it will be 10 times easier to perfect the level.

Go up the first steep hill until you get to three pipes and a Koopa walking around. Two will have Piranha plants and one will be a Shy-Guy generator. Throw away an egg so Shy-Guys will start jumping out. Kill the two Piranha plants, eat the Koopa and stand on the pipe. Spit the Koopa shell towards the Shy-Guys. The shell will bounce between the two pipes, knocking out the Shy-Guys. As soon as ten Shy-Guys are knocked out, you will start getting a 1-Up for each consecutive Shy-Guy. The shell will keep bouncing around, killing the Shy-Guys that pop out. You can get up to 999 lives this way.

Go to a door on your left. Use a POW block or "?" and go to the door and get the secret code. This code will give you free mini-games when you go to the level selection screen.

Get 1,000 points in a world (100 points on all ten levels including Extra and Secret levels). A star will appear on the game selection screen. Get five stars on that screen to unlock hard mode.

Get your total points for a world to equal to exactly 777, to get 7 extra lives.

Get The 6 New Secret Levels

Beat the game to get a whole new set of 6 levels not found in the original Yoshi Island.

At the screen where you select a level, hold select and press: L,L,B,A,R and you can play mini battles. But after you play you must type in the cheat again.

Beating The Boss On Level 2-4

To beat the Boo Boss on level 2-4 you are probably just throwing eggs at it. Well, you're wrong!! You need to face the wall oppisite of where Boo is. Throw an egg at the wall, and it will bounce off the wall. Hopefully you hit Boo. Keep repeating this step until you are finished. Note: Each time you hit Boo, it will get slightly bigger. Just try to stay close to a wall and you should be O.K.

Levels After Beating The Game

Changing The Color Of Your Yoshi

To change the color of Yoshi, beat the level that you are on. (Example: At the end of level 1, in any world, the green Yoshi passes Baby Mario to the pink Yoshi) There are 8 different color Yoshis, but the controls of each Yoshi stays the same.

To practice the mini-games, highlight a stage, hold down select, and press L, L, B, A, R. You will be able to play Balloon Toss, Balloon Squish, Watermelon Seed Spit, and Coin Collect.

To morph Yoshi into a vehicle, touch a morph bubble. Yoshi can turn into 5 different vehicles:

Before transforming back into Yoshi, hit the Yoshi block to call baby Mario to you.

To activate sleep mode, Press Select, L, and R buttons. This will make your GameBoy shut-off, just when you re-activate your game, (by pressing L,Select, and R)you will start in the exact same place as you were in.

We have no unlockables for Yoshi's Island: Super Mario Advance 3 yet. If you have any unlockables please submit them.

When you have certain eggs that you want to keep, but are at the front of your line, simply press R, and make sure it's on realxed egg throw. Then, press the B button while the aiming curser is still moving around. This will make the egg go to the back of your line, making it much easier to use special eggs whenever you like.

To get special Yoshi eggs with out having to find special boxes, fire a Yoshi egg in an area that will cause the egg to bounce off the walls and back to you. When the egg returns to you, quickly use Yoshis tongue at the egg. If successful, you should have a special Yoshi egg.

Press any direction on the D-pad and the target will stay up.

When you get the end with the red bridges, ground pound on a bridge. Right before you hit the ground, pause the game. Yoshi and the bridge pieces should fall through ground and sky over and over again.

We have no guides or FAQs for Yoshi's Island: Super Mario Advance 3 yet. If you have any unlockables please submit them.