Use the above links or scroll down see all to the Game Boy Advance cheats we have available for Yu-Gi-Oh! GX Duel Academy. 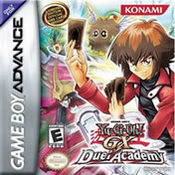 If you go without dueling headmaster Saytr Of Ra Yellow for over a month, duel him. He will complain about how nobody likes him anymore and other things. If you defeat him, he will talk for a bit then give you a free card. On some dorm switch exam days, Miss Dorothy will be having trouble delivering new card packs. She will ask you to help. Help her and you will get a free card pack that later in the game will cost 1000 Duel Points Help her any chance you get. You only get five cards, but you can complete other packs with this pack.

If you duel Syrus as a Ra Yellow, once you start the duel the screen will fade out and read "A Few Turns Later". After that, Syrus goes through the problem he has in the anime with his brother and Power Bond. Instead of using Power Bond, he uses Polymerization. In your hand you are given four E-Heros. You will then use Thunder Giant to beat Syrus. After the duel, he runs off and drops Power Bond. You can then keep Power Bond. If you keep skipping days as a Slifer Red by staying in your dorm, you will eventually see a "?" by your room. When you go there, someone will knock on your door. It is Chummley. He will challenge you to a duel, saying that you need more confidence and that you should leave your room more. If you win, he gives you a card that Jaden gave him when he was about to flunk. The card is Master of Oz.

You are able to get the card Jinzo by defeating Obelisk Blue people frequently, including Doctor Crowler. Doctor Crowler will get mad and send a man called the Shadow Duelist. He hires to come after you like in the show. When you defeat him, he drops the card Jinzo and a bill for Doctor Crowler. If you put Jinzo in your deck, a kid from Obelisk Blue will ask you to join his team if you are able to defeat him using his deck. When it is Thursday or Friday, he gets taken over by Jinzo from some ritual he tried so that he could summon Jinzo.

In order to get a free A Hero Emerges card, wait until you meet a student named Blair. Jaden will tell you that he thinks Blair is hiding something and wants to duel him at the harbor. Go there at night when you see the icon for Jaden and call out to him. Defeat him in the duel and you will win a free A Hero Emerges trap card.

If you are in the Obelisk Blue dorm after you have defeated Zane at the Grand Festival , sometimes if you have been sleeping for days in your room without dueling anyone, Zane will knock on your door. He will duel you. If you defeat him, sometimes he will give you a free Cyber Dragon card. Note: This will only work if it is New Years. Zane was knocking to have your spirit raised, and he will know that you are turning blue. Then he knows you are choking on food.

Destiny Board And Spirit Messages

Put Destiny Board F and Spirit Messages I, N, A, and L in your deck. Then, duel anybody. When you have it in your hand, play it face down. On the standby phase of your opponent's turn, flip it face up. When it is face up, the screen will darken and a ghost with an F will appear. During each of your standby phases, a Spirit Message will be played from your deck or hand, each with a ghost with a letter. Do not play any face downs. When all of them are played, the screen will turn black except for Destiny Board F. All of the ghosts will line up, spelling "FINAL", and winning you the duel. For winning this way you will receive an extra 3000 DP.

Reach the "King of Games" rank to unlock the "Principal's Office" room at the Duel Academy location. Enter it to duel Chancellor Sheppard. Note: You will drop in status to "Prince of Games" if you lose to him. Defeat him more than once to be able to change your character's name.

We have no unlockables for Yu-Gi-Oh! GX Duel Academy yet. If you have any unlockables please submit them.

We have no easter eggs for Yu-Gi-Oh! GX Duel Academy yet. If you have any unlockables please submit them.

We have no glitches for Yu-Gi-Oh! GX Duel Academy yet. If you have any unlockables please submit them.