Use the above links or scroll down see all to the PlayStation 2 cheats we have available for Clock Tower 3. 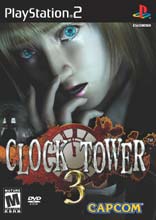 Upgrade Second Time Around For Demons

After you complete the the game 1 Time around, Sludgehammer should have a sludgehammer like usaual. So if you complete the game and play it again, youre in for a big surprise. SludgeHammer has a spiked ball! This goes for the rest of the demons. Corrodor's weapon is a white vail of sorts. Also, the bosses are much quicker.

To get trough barriers, (Mostly on doors) spread some lavender water on it. The barrier should break like glass and you can go through.

When you first meet him, run through the closest door (which leads to the main room in the clothing store). Run behind the curtain and stay there until you either hear or see him leave, or if he finds you. If that happens, run back up the stairs and into the room where you first met him. Then go through the door again and hide in the curtain once again. When in the music hall, go behind the stage curtain. He cannot and will not follow you back there. Though this may kill your time, it is a simple way to avoid him. Another place to hide in the music hall is in the locker on the second floor. He may sometimes find you, depending on whether Alyssa is in panic mode or if he is close to you. When in the music prop room (where you get the matches), once you leave the room Slugehammer Man appears. Quickly run back into the music room and use the violin case. A short intermission sequence will appar.

Locations To Hide From Bosses

It can be difficult to find a place to hide or something to use to attack a Boss. The following are locations and items that you can use. Note: If you are trying to complete the game on a time record do not follow any of these tips.

Get Rid Of The Moth

Although moths may appear as if they are your friends, they are not. If they get near you, either use your Holy Water or keep pressing X and Alyssa will say "Get off".

Get Out Of Panic Mode

To get out of panic mode either use Lavender Water; or while you are running and Alyssa, stops keep pressing X. She will be able to move again.

Timing The Charge For An Arrow

If you do not know when to fire the arrow, count ten seconds, then fire. You can also count seven seconds and fire, but it will not be as strong.

It is recommended that you carry as many Holy Waters as possible, and refill every time you get to one Holy Water remaining. When he first appears, use the Holy Water and run for the door on Alyssa's right. You should be in a office room that has two fish tanks. Run behind the fish tank that is closes to the television screen. You will see Chopper Man enter and repeat his "Oh nice trick" phrase. When you either see or hear him vanish, the coast is clear. When he appears on the B2 floor, does run down the stairs and go all the way to Alyssa's left. There should be some barrels and fire there. Hide in there and a short intermission sequence will appear. If he appears at random in the factory, do not bother hiding in the elevator. It will not do anything, as he will still be outside the elevator waiting and you will be trapped. If you need to enter the elevator and go to either B1, B2, or B3 (whichever floor you are on) and ride the elevator up or down, then go back to the floor you were on. When doing this, he will appear on that same floor again. This will get you just enough time to do what you need to do. If Alyssa is in panic mode, you will not be able to use the elevator. It is best if you use the Lavender Water to lower her panic or try to make a run for it. When you enter the grave yard after the intermission sequence, run towards Alyssa's right. There should be a house. Once inside, go around and pass the beds. Hide behind the curtain until he is gone.

When you first meet him, use the Holy Water. This will set him on fire for a few seconds and give you enough time to run. Run down the steps (where the lion fountain is located) and run past the door. There should be a small outhouse. Run in there until the music stops. If you enter the house and he appears, run up stairs. He will follow you. Go into the room and under the bed (if you have not found it already). There should be a secret ladder leading to somewhat of an entertainment room. When down there. Acid Man will appear. When he does, look for a fire extinguisher and use it against him. This will cause the room to become filled with white smoke and he will not be able to see. Use this chance to get out of the room. If you are on the other side of the big fans outside when he appears, go through the only door there. Go down the stairs and into the first door. Go all the way into the back. Alyssa will see an electric box when he comes in, and is close enough use it against him. This is another chance for you to escape. After he has fries, he should come out again. If he does, run past the door (where the electric box was located) and past the ghost (whose spirit you must set free). You will reach somewhat of a dead end. Stand there for a few seconds, and the music should stop, indicating that he left. If Acid Man follows you down there, use the Holy Water on him and run back and out the door to where the giant fans are located. Stay there until he follows you. When he does, run around the junkyard and back in the door. Go back to where that dead end is located. Another way if he follows you again is to walk towards the wall, and on that small walkway Alyssa will walk against the wall and he will be gone. Beware -- when you do the bridge part he will appear again and say "I found you".

When on Scissor man's side of the mirror (which is almost the same as Scissor woman's side), on the first floor is the men's bathroom run inside one of the stalls and lay low until he is gone. Note :If you are playing a clear mode game, be careful; when you are surprised your panic meter goes to full. If he does surprise you, he will do somewhat of a dance. Put some Holy Water on him and make a run for it. The best place to go is through the other side of the mirror. When on the other side, you will now be chased by Scissor Woman. Her side is almost the same, except everything is changed around. The bathroom that was on the first floor is now on the second floor. If you go to the second floor room where you find the empty chair (in Scissor man's side there is a dead body there, and this is where you use the form). All the way on the top corner (towards the television screen) is a hole where you can get through. This really is not that much help, as the music will stop for a few seconds and then restart. When you make it through the second part of Scissor Man and Scissor Woman's stage, an intermission sequence will play. After it ends, Scissor Man appears. Run into the clock tower. If you go to the door on the left, it is Scissor Man's side. The right door is Scissor Woman's side. On Scissor man's side, run up the stairs. You should be able to go to the edge and hang off. This will trigger an intermission sequence. Since there is nothing really on Scissor Man's side and nowhere to run or hide, do not bother going there anymore. When on Scissor Woman's side, go up the stairs. Go towards the sky and slide against the wall. When you reach the end and are in the kitchen, after putting out the fireplace, Scissor Woman will appear. Go to Alyssa's left. There should be some ashes. Use them against Scissor Woman. When you are in the Library part of the clock tower, Scissor Woman will appear. Go outside and towards the sky again. Move Alyssa towards the right. This will bring you back to the Library. Scissor Woman cannot harm you in anyway. When you get to the intermission sequence where you see Dennis and what Scissor Man and Scissor Woman are doing to him, you will never be chased by either one of them again.

Don’t charge to the max when fighting the final boss. The instant the boss fight begins, charge to second stage glow (small glow, then medium glow), and blast him. If he already shoots the fireball, press X to squat and dodge the fireball and repeat until he can't use his fireball anymore. When he laughs, it's your chance to use 2nd stage blast on him repeatedly until he dies. He can't use fireballs since he's been disrupted by Alyssa’s medium charge arrow, thus combo- ing him to death. But if he suddenly use the blood puddle attack, run and repeat. His dialogue will indicate if he’s going to use it. Press R1 to use special arrow.

Watch when she's coming towards you. Then face her, aim, wait till she's right at you, and release. She will retreat. Also, you can try moving, and when she gets near you and stops to attack, get strafe out of the way, turn, aim, and fire.

Charge up until your arrow has a little yellow "tail" coming from it.

Successfully complete the game to unlock Clear mode. This mode is a more difficult version of the game with enemies have more powerful weapons and your character's panic goes to full when surprised.

Successfully complete the game. Load the saved game to start a new game with a key in your inventory that will open the closet in Alissa's room, allowing five different costumes to be worn including a cowboy outfit, schoolgirl uniform, Greek dress, Santa’s helper costume and a sailor outfit.

Successfully complete the game to unlock the "Cinema Theater" option at the main menu. Press R1 in the Cinema Theater screen to view art from the game.

After beating the game, you can also access artwork featuring character and pre- production area designs. To access the art gallery, press R1 when in the cinema viewer.

We have no unlockables for Clock Tower 3 yet. If you have any unlockables please submit them.

We have no easter eggs for Clock Tower 3 yet. If you have any unlockables please submit them.

We have no glitches for Clock Tower 3 yet. If you have any unlockables please submit them.

Submit a cheat for Clock Tower 3