Use the above links or scroll down see all to the Xbox 360 cheats we have available for Dead or Alive 4. 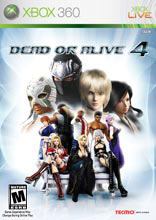 Costumes for the most part are easily unlocked by two methods. One involves completing story mode with a character to get their next costume, while the other involves purchasing them at the Zack Shop under DOA 4 Live. Note: If this is your first time playing the game you should initially have 10,000 Zack points already, which is enough to purchase two costumes for whomever desired.

What You Get When You Beat Certain Storymodes

Dead Or Alive And Halo Clash

To easily unlock the Time Attack achievements (Bronze, Silver, and Gold), go into "Settings", then "Game Settings", and change the "Time Attack Mode Match Points" to "1" instead of the default of "2". By doing this, you will only have to defeat each opponent once instead of twice. Note: Costumes cannot be unlocked and your score will not be on the leaderboard unless it is under the default settings.

Some of the game's secrets shown in the achievements list are actually goof rewards. These vary from Loss Streaks to Rank Demoting.

Complete the game as Eliot and try to complete it with Kasumi. You will have a small chance to fight against Gen Fu in the first round.

Complete Story mode as Helena to unlock a stage similar to the first stage of Halo 2, the hangar area.

Unlock all costumes and system voices and complete story mode for all seventeen characters to access the Tatami stage, which has a floor mat with no walls.

The sparring mode has been vastly upgraded, so learning each characters strengths and weaknesses, and mastering their litany of combos, is easier and more intuitive than before. You can choose any stage you have unlocked and spar against any character you want (just like before), but you can also set specific actions for your opponent to undertake and even select which stance they use. You can also go through each combo one by one, setting the game up so it ticks each combo and move off the list as you successfully complete it.

You can now use the environments to your advantage by not just knocking someone through a window or down a staircase, but also by employing context-sensitive actions. For example, you can leap over a barrier towards an opponent and lay down a special attack, use special acrobatic moves off of walls, and context-sensitive throws near hillsides and stairways. You need to practice extensively with your favorite characters to make good and strategic use of these moves, but they warrant the extra effort.

On the Gamblers Paradise stage, if you have Xbox Live, have a motto, and are signed in, look at the thing that scrolls the message "Congratulations on the Xbox 360 launch!". Instead of showing that, it will show your motto scrolling across.

Complete single mode with the indicated time limit to unlock the corresponding trophy.

Complete single mode with the indicated number of wins to unlock the corresponding trophy.

Select Spartan-458 and play on the Gambler's Paradise stage. During the match, a Warthog with Marines will appear on the road.

Press A to select La Mariposa, Leifang, or Kasumi. Then press X, Y, or A to start the match with their alternate appearance.

Press X or Y at the stage selection screen to change various aspects of the selected stage.

To jump over the cars on the Gambler's Paradise stage, simply use a mid-kick counter when the car is about to hit you.

It is possible to fight against Tengu at stage 7 of Time Attack mode. In order to do this, you must defeat he first six characters with a time of 2:30 or less, and also score one "Greatest" (taking no damage against any one character in both rounds) along the way. Once this is done, you will face Tengu at the Ninja Hideout, but outside the tower in that pit. The "Jintsuriki" can be heard playing in the background.

Successfully complete story mode with all characters to unlock the U.S. television commercial for the game in Movie Theater mode.

As in the previous Dead Or Alive games, you may enter your age as "99" by going into your profile from the main menu. This will result in the female characters' breasts to bounce more than usual.

Whether against the CPU or online opponents, recognizing patterns does a lot for you. Online players tend to fall in love with specific combos, which can be thwarted at the beginning by beating them to the punch (or kick as the case may be), or countered at the end with a reversal since the last move can usually be predicted. The reverse is true as well, especially online. Make sure you mix things up as much as possible. Remember, many combos start out the same but can end very differently. Try to make sure you change up not only your combos, but the ends of each combo to keep your enemy on their toes.

More than in the series' past, each fighter offers their own unique style. Do not think that just because you are dominant with Bayman that you will find equal success with Bass (or Spartan-458, for that matter). Treat each character as separate entities and you will find more success.

When fighting as Jann Lee, there is a way to go over the edge and become a killing machine. To do so in every match, follow this sequence and break it into separate parts. First, you want to at least try to land a critical punch or kick to the enemy mainly in their head. If not accomplished, make use of quick countering or blocking to land a nice firm blow. Afterwards when your enemy is hit off balance for a few seconds, keep throwing random critical blows to the head region mainly, and mix it up slightly to the body and legs. If you can do this and include fast combos in between your rhythm, you should be able to keep the enemy off the ground desperate for making successful blows. You should be able to do this technique with simple combos easily. Make sure that your rhythm is broken, meaning attack at different times without staying in a similar pattern and keeping your blows mostly critical. If you can do this much, you should also be able to switch it up with fast combos making it almost impossible for your opponent to counter. Remember to execute critical blows to the head mainly, mixed with fast combos and quick blows to the body. Keep your rhythm broken so it is impossible to counter (no repetition or repeating the speed of blows), and make sure to keep your guard up. Do not allow the enemy to hit you unexpectedly, or they may confuse you with the same trick. Try to at least counter when you lose balance in the match or the winning streak may turn on you.

Successfully complete Story mode with Helena to unlock Spartan-458 from Halo in all modes except for Story mode.

Successfully complete Story mode with Zack to unlock Leon in all modes except for Story mode.

Successfully complete Story mode with all sixteen characters to unlock Helena in all modes.

Successfully complete Story mode with Eliot to unlock Gen Fu in all modes except for Story mode.

Successfully complete Story mode with Hitomi to unlock Ein in all modes except for Story mode.

To get this character, you must first beat story mode with every character.

We have no cheats or codes for Dead or Alive 4 yet. If you have any unlockables please submit them.

We have no unlockables for Dead or Alive 4 yet. If you have any unlockables please submit them.

We have no easter eggs for Dead or Alive 4 yet. If you have any unlockables please submit them.

We have no glitches for Dead or Alive 4 yet. If you have any unlockables please submit them.

We have no guides or FAQs for Dead or Alive 4 yet. If you have any unlockables please submit them.

We have no achievements or trophies for Dead or Alive 4 yet. If you have any unlockables please submit them.

Submit a cheat for Dead or Alive 4