Get the latest Destroy All Humans! Path of the Furon cheats, codes, unlockables, hints, Easter eggs, glitches, tips, tricks, hacks, downloads, achievements, guides, FAQs, walkthroughs, and more for Xbox 360 (X360). CheatCodes.com has all you need to win every game you play!

Use the above links or scroll down see all to the Xbox 360 cheats we have available for Destroy All Humans! Path of the Furon. 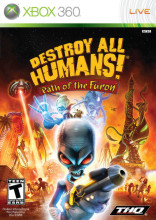 How To Kill The Robbers In Belliville

To kill all of them follow these presice instructions:

Destroy Nexo Walker With Your Lazer

Fly behind the Nexo walker at the sunny wood bowl. After that just zap it. It will do it's own lazer on you. Jump over it but stay behind. The small Nexo's will try to shoot you just hit them back with PK and throw them. Then once you have the Nexo Walkeron half life. You will fly back form behind it. Then fly back behind it and do the whole thing again.

Get All DAHM Achievements

First we will start back at Las Paridiso. Find the gas station that has a big cylinder shaped propane tank at the corner. Just shoot it with the zap-o-matic then a big yellow word that says DAHM! Will pop up. Then we go to Sunnywood. Take your saucer and use the death ray on the word sunny on the big sign that says Sunnywood. The next two are also in Sunnywood. Find that big silver globe. Use pk on it then just smash cars with it. Then for the next, find a building that has a donut on it. Use pk on a citizen (it don't work on cops)and pk throw them through the hole in the donut. The next is in shen long. Go to the monastery island. Find 2 rocks that are very close together. If you see a big brown rock shaped like a ball behind the two, then use pk on it. Then find the big group of monks in front of the big statue, throw the rock/ball at them. Make sure its kind of off the ground or it will bounce in the air and get lost. Knock down at least 3 monks with it in a single throw. The next two are in Belleville. Get in the saucer and find 3 barges in the water and blow them up with the death ray. The next is at the big arch. Pick up a citizen and stand on top of a building close to the arch. Then fly up in the air and throw him over the arch. The citizen should then blow up for some odd reason.

To beat the giant squid, use your disintegrator ray and keep firing. Be accurate when firing. Don't waste your ammo! After awhile, his tentacle will have electric strings on them. You just have to jump through them. Keep firing w/ disintegrator ray until he's dead. You can also use time stop to fire his fireballs back at him. But your best bet is the disintegrator ray.

How To Kill Saxon

If you are on the level where you must fight that huge dragon thing, read this. The dragon will try to shoot you with missiles. When the missile is in the air close to you, use time stop. Then use pk on the missile and point it back toward the dragon. You don't have to use the temporal fist, so you can just point the missile in the direction on the dragon you want it to go, then it will go by itself without the temporal fist. When the missile hits the dragon, its shields will temporarily be destroyed, and you can shoot him until the shields come back on. For most damage, try to use the ion detonator. Repeat until dragon is destroyed.

To turn on the cheat mode, select "Unlock Content" in the Extras menu. Then enter the cheat codes to unlock the options. After they are unlocked, you can view them in the "Options" menu.

We have no unlockables for Destroy All Humans! Path of the Furon yet. If you have any unlockables please submit them.

We have no easter eggs for Destroy All Humans! Path of the Furon yet. If you have any unlockables please submit them.

We have no glitches for Destroy All Humans! Path of the Furon yet. If you have any unlockables please submit them.

We have no guides or FAQs for Destroy All Humans! Path of the Furon yet. If you have any unlockables please submit them.

We have no achievements or trophies for Destroy All Humans! Path of the Furon yet. If you have any unlockables please submit them.

Submit a cheat for Destroy All Humans! Path of the Furon