Use the above links or scroll down see all to the Xbox cheats we have available for Halo 2. 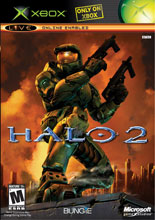 To do this you need to be in split screen with someone else or on live. You need to have someone jump on top of you an then have them jump an right after they jump you jump. keep repeating this an you should be able to get all the way above the level that you're on. This works best if you are playing team slayer because you can get your teammate up to a high position and you can pick off your enemies real easily.

In the level "Delta Halo", when you have to clear the 2nd LZ, go to the ledge where you can see the "temple" that Cortana mentioned, and you'll have to go to the wall where a huge block blocks the way. You'll have to find a way to make space to get through it:some grenades or a rocket. WARNING:This depletes a LOT of grenades, mostly all of them, and the rocket could kill you. Once you get through and you're inside it, walk up the stairs and you'll find 2 dead grunts and 2 ENERGY SWORDS!

On outskirts there are 2 hunters that barge through the gate. To kill them easily, get on the mounted machine gun on the building. Once you see them shoot at them until they die. Its easier to do this than to lose health and go through a 3min. Battle.

On the stage "Zanzibar" you can "BlastJump" by running toward the explosive canisters and jumping over them, while you are in the air right above the canister, shoot it, and make sure it blows up. The blast should send you flying though the air. If you do it wrong, you could die!

This is extremely stressful, but totally worth it in the end. Here's what you do. First start off in Metropolis, then lure a banshee into the tunnel with you. Kill off any and all the Marines in the process (reason being is that they'll try to destroy the Banshee on sight). Kill off the Covenant, but make sure that the Banshee is still following you (you might have to shoot off its wings for it to fit through the tunnel way). Once you make it through to the end before you go to the next level, make sure you don't get too stressed out with this (the pilot is an idiot). Once it gets in there, don't go up the shaft yet. Go to the far left and make it follow you there, then go to the right side of the shaft and the Banshee should go into the shaft. As soon as it goes in, follow it. Once it says loading, board it. If you don't, it will disappear and you'll have to do the whole thing all over again. Once you successfully board it, fly left and up to a bridge type thingy. Land on top of it and you will see a traffic cone with a Plasma Rifle floating above it. This gun is the Covenant equivalent to a cross between the human Rocket Launcher and the SMG that has unlimited ammo and won't heat up.

The Quick Way To Load On Co-op

Tired of the flood coming back to life? Use the energy sword against them and they'll explode. Since they are in a million pieces or so, they can't come back to life.

You have to be master cheif to do this it might be hard to do but really cool to do. Aim down throw the plasma grenade make sure it sticks to your leg and move. If light flashes in your leg then jump and you'll find yourself high in the sky for about four seconds. (works better in online or splitscreen).

How To Kill Hunters The Easy Way In Any Level

The orange spot that they have is there weakspot so try to shoot them there its hard but worth it (it works best with a beam rifle).

On the last levl (on co-op) after johnson blows up the control room door have your partner stand on the scarab and then you fly down to the cliff and there should be the banshee (and there is another one by the tower on the right).

To make sure phantoms aren't a threat use the scorpion or other explosive weapon/vehicles to destroy it's 3 turrets it'll still be unfazed but you'll destroy it's turrets so it is no longer a threat unless it drops covenant off but your vehicle/weapon will kill them off easily.

Go to split-screen go into a game and throw a plasma grenade on a machine gun turret. There should be a pole sticking out of the ground. Then go up to it and it should say X to operate turret. Do that and you should be shooting nothing.

On the level zansibar, open the gate, it will have words of how to fix your computer in a seriously WEIRD way, but you will need to zoom in to see the words. Trust me, its seriously weird and funny!

When you switch your weapon, quickly throw a grenade, your weapon instantly turnes into your secondary weapon (Y, L trigger [quickly]).

On the level OutSkirts, at the beginning of the level, go out the doorway and jump up on the light thing and turn left and jump up on the brown thing (must use crouch jump). Once up there, turn left again and there should be a passageway and at the end of it there should be 4 hand grenades and a skull pick up the skull and everything will disappear (gun, ammo, heath, radar, grenades) but you can still use your guns and grenades you just can't see them it makes everything very difficult if you're up for a challenge.

To see the bloody dog head, go to your xbox dashboard and go to the clock and date then change all the numbers to "7". You have to be on split screen and its 100% awesome.

To preform this stunt, play a split screen game with two or more people. Set the game up at any place that has at least two spawning locations for heavy vehicles. Go to quick options and set the heavy vehicles to random. When you start the game, you need some one in a wraith, and some one needs to drive the scorpion. Preform the wrath's ramming action at the scorpion. Try to get underneath it's belts. It may take a few tries, but when you get it, the scorpion should take off like a giant frisbee. Often resulting in the death of its driver. The cool thing is, sometimes the blown up portions of the tank will ricochet off the walls until they disappear, killing anyone it hits.

To do the super jump you need to be at one of the bases at coagulation. To do the jump go up the left or right side of the double ramp, run towards the left side an crouch in midair into a small hole. Keep crouching and start to walk slowly forward. After about 30 seconds, drop to the ground by standing up an make sure you are looking down so you can jump right when you hit the ground. Don't worry if you don't get it the first time it took me a few times before I could get it.

This trick can help you get up to tricky areas in online mode or single player mode. All you have to do is aim your covenant energy sword at an ally or foe and press the attack button when you do press the x button before you hit him, and you'll be flying towards the enemy. This could be used if enemy's are standing on top of you..

See Cause Of Pelican Crash

Play the mission on the legendary difficulty setting. Proceed until you reach the first Banshee section. Immediately fly straight down to the bottom of the level. Search the cracks where the large cylinders connect to the station to find a circle of Grunts dancing around a skull. Get the skull and the words "Grunt Birthday Party" will appear. When you get the skull, all headshots that kill the enemies will cause them to explode as if a plasma grenade were attached to them. This works well if you aim for a Grunt in the middle of a group of enemies. Also, this may only work for projectile weapons, but does work for the Covenent carbine and the Covenent sniper rifle.

In the first level, as soon as you get off the lift do not go on the train. Instead, look to your right to find a trash can. Go over to it, crouch, and look in between the can and the wall. There should be a Johnson Cigar burning away. Additionally, go to the armory. As you are coming up the stairs, you will hear the man shooting his shotgun and talking. Kill the Elites and go through the door. Jump over the turret and look to the right. Jump on the lights sticking out of the wall, then jump over the rail. Get on one of the beams and jump off it onto one of the rails. There will be a small room with no doors. Jump onto that and bash the trash can. When you look on the floor, you will see Johnson's cigar.

In the multiplayer mode, play the level Zanzibar and go into the room with the giant wheel in the middle. Near the entrance should be a little computer. When you get close to it it will say hold X to open gate, hold X. The comp screen should turn blue. With a weapon with a scope or zoom feature read what appears on the screen.

The secret is to shoot with one gun when your overwhelmed by enemies, and when that gun runs out of ammo/gets overheated, shoot with the other while your reloading. This way you will never end up in a situation where the enemies are atttacking you and you're defenseless because your reloading both guns.

You Need to use the Plasma Pistol & SMG as a Dual Weapon combo. First charge your pistol and fire it at an enemy. This usually knocks out their shield. Then finish them off with your SMG. It's very effective and normally works. Also try it on- line.

We have no cheats or codes for Halo 2 yet. If you have any unlockables please submit them.

We have no easter eggs for Halo 2 yet. If you have any unlockables please submit them.

We have no glitches for Halo 2 yet. If you have any unlockables please submit them.

Everything New in Halo 2

A Guide to Weapons and Vehicles

Halo Beastiary part one of two.

A Weapons Guide To Halo 2 Multiplayer

Submit a cheat for Halo 2