Use the above links or scroll down see all to the Xbox 360 cheats we have available for Halo Wars. 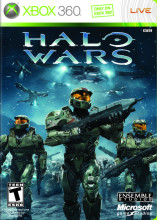 Anders Is Worth Something

First of all this is a glitch that you can get with Professor Anders only. It works in every mode even multiplayer. First you need to put 4 supply pads in the front of the base at the beginning of the game. Then upgrade the base to fort wait till you get 250 then buy a reactor at the back left build spot (do not upgrade you will upgrade in a later step). Then when you get 900 upgrade the supply pads to heavy. Wait for 1800 money then build 2 reactors beside the first one then use the cryo bomb to freeze the two building reactors (if the first one gets frozen it is ok) when the two building reactors are starting to re-build delete both then upgrade the first one then you have 4 reactor points in one upgraded reactor and you have 2 more spots to build (I recommend airpad and field armory).

When you are in a skirmish game, when its either a 2v2 or a 3v3, when you need your allie's help, click down the left joy stick, and one of your allies ( such as player 3) will go to the marked position, or if you click the left joy stick over an enemy, or base, they'll send troops to kill it.

Make one reactor so you can upgrade your warthog and making it have a gunner on it. After you make the reactor, make 3 supply pads so you make resources to upgrade warthog. After you have your 3 supply pads you can make anything you want after that.

Good Set Up For Base Any Covenant Leader

Four warehouses (upgraded) in the front, with temple in back middle spot. With shield generator on a side, then with last space yours to do what ever with. I recommend another shield generator if making scarab.

I recommend building 2 reactors and then build 4 supply pads when you get enough money upgrade them to heavy. Then if your anders you can build an airpad and upgrade the hornets and you can build hawks.

The best thing to do, when the game starts, automatically create a temple, and with the left over 300 supplies, create 3 warehouses. When you finally get your leader, immediately start your attack at the enemies base. Take your ghost or chopper with you. Just attack the base and kill of the enemies. While your supplies build up, keep training the unique unit, and teleport them to the leader to build up force while assaulting the enemy.

Start by making 2 supply pads, then make one reactor after that. When you have at least 800 resources. Build two turrets, then make two more supply pads. After a while, add one more reactor, and concentrate on one class/type of units, like infantry, or air units. This way, you can easily upgrade all vehicle depot units, or whatever, and not waste resources.

How To Win A Skirmish More Easily.

When you begin a skirmish, make all the units the same (ex. All warthogs). This will help you attack faster and more aggressively. Also, make as many supply pads as possible and leave two spaces for reactors. If you capture more bases, You can upgrade the base and use all supply pads.

When playing skirmish on the map The Docks there is a street that connects the way to your base and your oppositions base. This street is filled with cover and sniper towers. For the covenant I suggest puttin Brutes if you have them in the sniper towers and jackals in cover. UNSC you should put marines on both.

Skirmish Base Taking For The Arbiter

Suicide Grunts are the way to go when wanting to destroy a base that is already occupied by rebels. Send in a couple squads because the turrets can easily take out Grunts.

Send Your Scout Out First

When you start a standard skirmish game send your scout to pick up any supply crates in your area to get supplies before you build a supply pad.

There are three Covenant Scarabs on this mission. Use your MAC Blasts, Carpet Bombs, and Cryo Bombs mainly on them and Covenant bases. Also, I recommend that you get your tech level to level four. A couple of Vultures can come in handy especially with the Mega Barrage.

When you first start a skirmish, use your scout to head over to the enemy's base. If they have started expanding their base, it is a good time to attack - infantry will get the job done. But if they are training infantry, adding and upgrading turrets is the way to go.

Mission 1: Alpha Base - There is a small ramp by the bridge right before you rescue the last set of marines. Go down this ramp and the black box will be right between it and the bridge.

Mission 2: Relic Approach - North of the map there is an energy shield near the Covenant air pads and Methane Tanks. The box is behind this shield (You need infantry to reach it)

Mission 3: Relic Interior - Right from the start head down the ramp on your right and follow the path all the way to the end. The box is right before the crashed Pelican.

Mission 4: Arcadia City - The box is directly north of the West base location right beside a sky bridge. (If you donât know where the west base location is, just wait until you can build a base after the #3 transport is destroyed)

Mission 5: Arcadia Outskirts - There are two capturable reactors on the map. The box is to the right of the one near the center of the map. You need to go down some steps to reach it.

Mission 6: Dome of Light - Other island where you have to place the third rhino tank, there is an underground entrance south west of the rhino site, the box is in front of this entrance. (To reach the island you have to deploy the first two rhino tanks then use the Transport ability to get units there)

Mission 7: Scarab - The box is at the furthest point north east of the map beside a bunch of supply crates.

Mission 8: Anders' Signal - Go as far east as possible on the map. The box is in the middle of a plateau surrounded by trees.

Mission 9: The Flood - The box is at the west most point of the map in a corner near the bordering mountains.

Mission 10: Shield World - The box is beside the middle set of units that need evacuation. (The group with the elephant)

Mission 11: Cleansing - The box is on one of the ship sections off to the side which are inaccessible by ground units. It is on the North West side of the ship where the edge section starts to get wider. This is on the side with the flood base. It attached to the hull so it may be hard to see.

Mission 12: Repairs - This box is also on the section of ship inaccessible by ground units. It's on the very west side of the ship under the last gun turret near the power generator.

Mission 13: Beachhead - The box is on the far north east of the map at the top of a cliff. There are some small ramps which may allow for infantry to get to the box but is a lot easier to just use air units.

Mission 14: Reactor - The box is to the very south west of the map on a cliff ledge which can be accessed from the first elevation, where the first Covenant base is.

Mission 15: Escape - The box is at the north edge of the central circle shield thing.

(Mission 1: Alpha Base) Kill 100 Grunts. Get a Warthog and rush back to the front gate of Alpha base. The skull is where the Marines were held up.

(Mission 2: Relic Approach) Kill 20 Jackals. Head back to Alpha Base with a Worthog. The skull is in the south end of the base.

(Mission 3: Relic Interior) Kill 45 Hunters. Take a Grizzly, Anders, Forge and Your Marines back to where they were held up on the central pad.

(Mission 4: Arcadia City) Kill 50 Elites. Where you Set up Base Two in the streets, there are some stairs next to it leading to a Bronze Statue. It is next to the statue.

(Mission 5: Arcadia Outskirts) Kill 5 Wraiths. Get a Warthog and rush back up the tracks to the left of your Main Base. Just keep going straight past the split in the tracks to find the skull.

(Mission 6: Dome of Light) Kill 50 Banshees. Take a squad of marines to the Hanger behind your base. It is right behind it.

(Mission 7: Scarab ) Kill 10 Locusts. Get a Warthog and take it to the top left of the map where there were two locusts and a Power Nod. That's where the skill is.

(Mission 8: Anders' Signal) Kill 750 Infection Forms. Head to north side of the Map where you got the Elephant. Then head east towards a cliff but when you see the ridge, go into it.

(Mission 9: The Flood) Kill 20 Flood Stalks. Just northeast of your Main Base, there is a downed pelican. Take a Warthog to claim it.

(Mission 10: Shield World) Kill 350 Swarms. Get at least two Hornets and fly East of you base. Go past the first tower to a plateau covered with Flood Eggs. The skull is in the center.

(Mission 11: Cleansing) Kill 100 Sentinels. Take a Hornet to the front end of the Spirit Of Fire and it is right on the nose of the ship.

(Mission 12: Repairs) Kill 12 Spirit Transports. Take a Hawk to the lower two airlocks. It its right up the small ramp in the air.

(Mission 13: Beachhead) Kill 10 Bomber Forms. Head back to the start of the map by the first Teleporter. Head down the path to a flood nest and its right next to it.

(Mission 14: Reactor) Kill 20 Vampires. Head to the second Covenant Base and the skull is in the far corner at the bottom of the next ramp.

(Mission 15: Escape) Kill 3 Scarabs - Head the to extreme north of the map. The skull is at dead center of all the flood.

We have no easter eggs for Halo Wars yet. If you have any unlockables please submit them.

We have no glitches for Halo Wars yet. If you have any unlockables please submit them.

We have no guides or FAQs for Halo Wars yet. If you have any unlockables please submit them.

We have no achievements or trophies for Halo Wars yet. If you have any unlockables please submit them.

Submit a cheat for Halo Wars