Get the latest Harry Potter and the Order of the Phoenix cheats, codes, unlockables, hints, Easter eggs, glitches, tips, tricks, hacks, downloads, achievements, guides, FAQs, walkthroughs, and more for Xbox 360 (X360). CheatCodes.com has all you need to win every game you play!

Use the above links or scroll down see all to the Xbox 360 cheats we have available for Harry Potter and the Order of the Phoenix. 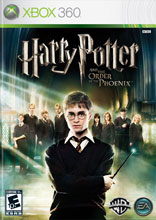 There is a hidden reference to the seventh book while at Grimauld Place during Christmas. When you are helping Ginny find Kreacher's items and you pull off the painting from the wall, notice the locket hanging from the wall. Ginny says it will not open. This is one of the Horecrux that is mentioned in the sixth and seventh books. It is R. A. B. 's locket, which he stole from Voldemort.

In the courtyard where Dean is standing.
The spiral staircase when you walk up to DADA.
In the Viaduct.
The fourth floor outside in the balcony.
In the Paved Courtyard. You must repair the broken staircase in the corner. It is at the end of the balcony in the corner.

In the Entrance Courtyard. Use Wingardium Leviosa on the broom and sweep the leaves on the right side of the courtyard.
In the Great hall on the table.
In the Viaduct Entrance in front on the bookcase next to the stuttering portrait.
In the Clock Tower Courtyard directly in front of the Fountain.
In the Library on the table.

The Charms book you need for Professor Flitwick's essay is in the Great Hall. It is being read by a Ravenclaw student sitting next to the fire.

When playing as Dumbledore fighting against Voldemort, do not try casting Levicorpus or Petrificus Totalus as they do not work against him. When Voldemort is on the platform the first time, you can only hurt him when he unleashes his stored power at you. Use Protego to deflect his magical blast.

The book you are looking for is difficult to find. It is in the restricted area on the far left in the second row from the very back. When you are close, an "X" will appear. Press it to retrieve the book. Then, return to Snape.

When you ascend or descend the steep, narrow staircase that connects the Dungeons to the Viaduct Entrance, you can hear howlers being played.

Go to the Entrance Hall. Go in the small custodian room to the left of the large exit doors. Use Wingardium Leviosa on the mop and hover it over each of the four odd tiles by the golden statue. It will clean them. You will get Discovery Points, and Hermione will talk, giving you a 100% on the Marauder's Map. Then, go to the Viaduct Entrance. Use Wingardium Leviosa on the mop near the dungeon stairs and clean the odd tiles by the large staircase. You will get Discovery Points.

To reveal the House Ghosts needed for the Room Of Rewards, find the fallen portraits throughout the Hogwarts corridors. Use Wingardium Leviosa to hang them back up on the wall. The Bloody Baron's portrait is in the Dungeons. The Grey Lady's portrait is near the library on the second floor. The Fat Friar's portrait is on the first floor near the exit to the Stone Bridge.

Go to the library and talk to the portrait that wants to know the headline of the Daily Prophet. Then, go to the Great Hall and walk up to the front table and turn to face the crowd. You will see a podium with candles on it. Cast Depulso for Discovery Points and Incendio to make candles appear everywhere. Cast Wingardium Leviosa and an owl will drop a newspaper on a table near a Gryffindor student. Examine the paper. Then, go to the library again, and talk to the portrait. It will tell you the password is "No news is good news. " This shortcut leads to the fourth floor.

When you are helping Colin with Fred and George's boxes at the Owlery, stand in the center of your area when he sends the very last box to keep it from falling down the stairs.

Shortcut To The Boathouse In Percivel Pratt

Find the portrait on the fifth floor of the Grand Staircase that rhymes. He will tell you to find the portrait with three faces. Go to the seventh floor corridor and find that three-faced portrait. He will tell you to ask Professor Basil Fronsack. Go to the third floor and ascend the stairs to the Defense Against The Dark Arts room, but stop at the talking gargoyle. Take the passage beside him. Keep going until you reach the portrait just before the Charms room. He will tell you to find the shepherdess on the second floor landing. Go back the way you came, but go through the door on the left before you reach the stairs to third floor. Go down the stairs until you see a portrait of a lady in pink with a staff and sheep. She says to see Google Stump in the Viaduct Entrance. Once there, go to the only portrait in the area, next to a bookcase. He says to ask Gifford Abbott. Go all the way down the stairs in the Grand Staircase. He is the last portrait before you get to the entrance. He tells you "This password is absurd. " Go back to Pratt's portrait and tell him.

Any time you see any object begin to light up, cast spells until you find the correct one, then do it again on the others. If you see a student light up, hold R1 and cast a dueling spell.

Although they cast Expelliarmus and deduct ten house points, you can cast combat spells at teachers. If you see a teacher light up (just like it does for other students and objects), hold R1 and cast a dueling spell. However, you will get a spell fired back at you from whomever the teacher is, and points taken away from Gryffindor, though you will never be given the House Cup.

In the Herbology classroom, walk into the room with four flower pots on a table. You will see a bucket hanging on the ceiling above the dancing water can. Use Wingardium Leviosa on the bucket and let it hover over each of the pots. It will pour dirt into them. Next, use Wingardium Leviosa on the water can. Hover it over each dirt-filled pot until it spews water on them. Spikey-plants will grow. You will receive Discovery Points. Then, go to the entrance of the Herbology room. Walk forward into the dead-end hallway directly in front of the door in the classroom. You will see a rope hanging up in a corner. Use Accio, and it will air out the room and give you Discovery Points.

Discoveries In Room Of Rewards

Use Wingardium Leviosa on the feather duster in the Trophy Room. Hold it over the two dusty trophies next to it, and it will clean them. Then, examine each trophy. Those four Discoveries will register a 100% on the Marauder's Map.

When you select a person or location on the map, footprints will lead you toward your goal. Keep a close eye!

We have no unlockables for Harry Potter and the Order of the Phoenix yet. If you have any unlockables please submit them.

We have no easter eggs for Harry Potter and the Order of the Phoenix yet. If you have any unlockables please submit them.

We have no glitches for Harry Potter and the Order of the Phoenix yet. If you have any unlockables please submit them.

We have no guides or FAQs for Harry Potter and the Order of the Phoenix yet. If you have any unlockables please submit them.

We have no achievements or trophies for Harry Potter and the Order of the Phoenix yet. If you have any unlockables please submit them.