Get the latest Harry Potter and the Prisoner of Azkaban cheats, codes, unlockables, hints, Easter eggs, glitches, tips, tricks, hacks, downloads, hints, guides, FAQs, walkthroughs, and more for Game Boy Advance (GBA). CheatCodes.com has all you need to win every game you play!

Use the above links or scroll down see all to the Game Boy Advance cheats we have available for Harry Potter and the Prisoner of Azkaban. 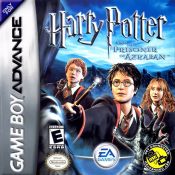 Every time you level up you replenish your SP and MP to their full points.

Try to run into (and win of course) as many minor battles as possible (you know the little glowing balls floating around?). Winning all these will give you more experience points and level you up, making it easier to win the bigger battles.

To unlock this mini-game you have to find all the 5 "Monster Books of Monsters" for Hagrid. After that, return to Hagrid and he will take you to see the Hippogriff. Everyone will leave a bit later and Harry will ride Buckbeak. After you exit the game, it will say, "You have unlocked Buckbeak's Hippogriff Glide in the mini-games" or something like that.

When Lupin turns into a werewolf and you have Buckbeak and your battle with Lupin begins, the order will always be this: Buckbeak, Lupin, Hermione, then Harry Potter (or Harry Potter then Hermione). What you have to know is that Buckbeak's attack is the only one that can get past "3" damage (your spells are worthless). Also, Lupin only attacks Buckbeak. When Buckbeak is unconscious, you have lost and have to start over with full everything in the Hospital Wing. Go back outside and go back to the lake (near the Whomping Willow) where you have to face Lupin again. If you want to beat him your first time, here's what you do: make sure that you have at least two of each card in the card combo called "Replenish SP." Whenever Buckbeak's SP is btw. 100-200, use that card combo. With Hermione, just use Flipendo on Lupin for 1-2 damage, as to not waste your magical power (as well as with Harry until Buckbeak is between 100-200 SP). Slowly and steadily, you'll beat him with Buckbeak (Yeah!). (P.S. Lupin's strongest attack does about 150 damage to Buckbeak, so be careful!)

Get Most Wizard Cards

If you don't want to gather most of the wizard cards going around the school and looking for those chests, get like 1000 sickles and go to Fred and George in the southeast part of Floor 7. Go to "BUY" and then go to "MISCELLANEOUS(?)" and buy like 200 Chocolate Frogs. You might even get at least two of all of the cards in a card combo. You also want to get these cards to go to the west room on Floor 5 to unlock prizes and stuff (when you have all of them in a particular category; ex: Quidditch).

This game requires you playing it twice to get all of the wizard cards, because some of them can only found depending on who you're doing the mission with (ex: find Crookshanks OR Scabbers in very beginning=====Harry and Hermione OR Harry and Ron).

If you can't find the transfiguration class on the first floor (ground floor), go back into the entrance hall and go up the opposite staircase and keep going straight. That is where the Transfiguration Classroom is (I got this game two days ealry. That's why I know where the classroom is after getting very ticked off at the game).

Get The Harry Potter Wizard Card

Harry Potter and the Prisoner of Azkaban walk-through