Use the above links or scroll down see all to the Wii cheats we have available for Lego Star Wars: The Complete Saga. 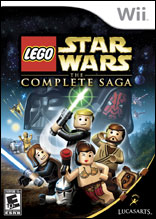 If you go through Mos Espa Podrace, when you pass the giant holes go on the far left side and grab the Red Brick. Once you get it save up 250, 000 studs and go to the extras section at the counter in the cantina and purchase it.

Go to episode 3 chapter 1. Chose droid tri- fighter. After you shoot the first set of guns, crash. Keep doing this until you have 300,000 studs or more.

My advice is to play through the levels first then go back and play it "free play". This way you will have the characters you need to get into special areas.

This move only works on lightsabers, but if you press the B button AND swing the Wii remote, it will create extra damage (you have to time your swings, don't just attack randomly)you can create different combos yourself like B+B+Swing. Also if you swing the Wii to do a super-smash (double-jump+attack) it will create more damage. You'll have to practice a lot to get it perfect (remember; timing is everything) but it really comes in handy in two-player duel and things like that. (P. S . The third attack, or final blow, can cut through anything on a person, even if they are blocking of are a droiddekka with their shield on. ).

To get the red brick in the mos espa level in episode 4, head forward right when the level starts. Right when you walk under the broken bridge turn left. Then with Luke or Obi-Wan, destroy all trash can's in front of the wall. Then you should see a little door with nothing behind it. Use the force with Obi-Wan to take the parts off the ground and put them on the wall. There then should be a panel with R2's face on it. Activate the panel with R2, walk in the door and you then should have unlocked a special secret.

Switch to a person that is from the Dark Side, (Darth Vader, Emperor, etc.) and force him using Z. Do not hold him into the Air for a long time or they will die. While in the air, push him into a wall/tree, and he will die. It is almost like a Jedi pushing droids.

To buy the ghost character, you need to all-the-way complete story mode/All Episodes. He cannot get hurt and is not paid any attention by troopers, unless in cars.

If you go to level one of episode IV in The Complete Saga there will be a machine with a lever. Pull the lever and out come about 10 silver studs. You can keep doing this to get money but it is slow so you may want a studs x cheat on. So far this has worked and is a good way to get cash.

Go to build-a-character and select luke's head, darth maul's body, black waist, legs and hands, skin arms black hair and a red lightsaber and then you have STARKILLER as a playable character!

First go to the level "Jedi Destiny" and select any character. Then when you take out the all of the Emporer's hearts ECEPT two. Then (make sure you have extra toggle turned on) change to the Imperial Egineer and jump once and then you'll here Stormtrooper noises.

Go to "Cloud City Trap" (Episode 5) throw bomb at metal gate beside R2D2 picture (unlockable point). The minikit detector is behind where the gate was.

Enter HHY697 at the cantina.

Enter CLZ738 at the cantina.

Type in EVILR2 at the bar.

Enter PMN576 at the cantina.

Sell your landspeeder to the Jawas.

Return Of The Jedi

Get 100 points in Arcade mode

Go into the "Bonus" doorway in the Cantina, then go through the door marked Trailers and watch the trailer for Lego Indiana Jones. You can then buy him for $50,000.

Finish Episode I in story mode.

Attack Of The Clones

Revenge Of The Sith

The Empire Strikes Back

Fire In The Hole!

Destroy 10 characters with one thermal detonator.

Pull 25 arms off other characters.

Set off all three Discos.

Use The Force Luke

Start a Cantina Fight with 50 casualties.

Make 100 Build-its throughout the game.

Max out the Stud counter

Did I Break Your Concentration?

Play through an entire level online

We have no easter eggs for Lego Star Wars: The Complete Saga yet. If you have any unlockables please submit them.

We have no glitches for Lego Star Wars: The Complete Saga yet. If you have any unlockables please submit them.

The Complete Guide for Beginners

Submit a cheat for Lego Star Wars: The Complete Saga