Use the above links or scroll down see all to the Xbox 360 cheats we have available for Madden NFL 06. 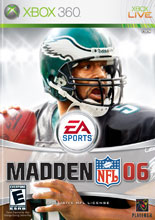 If there is a player you dislike, do the following to make him suffer. Go to "Features", then to "Rosters". Select his team then choose the player and go to "Attributes". Reduce his injury to "0". This may take awhile; you may also want to set the game to four or five minute quarters.

Go into the depth chart and switch an injured player with the regular starter. They will act as if they had no injury. For example, if you switch Daunte Culpepper with Brad Johnson he can throw and run just as well as he would without an injury.

Use the following trick to get the first pick in every round in the draft. First, turn off the trade deadlines. Then, trade all of your picks with the team with the worst record before the wild card week. You will get all of their picks, and if you have a good season, you can even trade one of your picks for two of theirs. Get your team in first place at a good record at week 13 to 16. Try to get about twelve wins. Then, go to "Standings" in "Play Week" to learn which team is worst. Go to "Trade Player" and select your first round pick. Go to the worst team and select their first and second round picks. Next, go to the second worst team and trade your second, third and fourth picks for their first and fourth round pick.

Use the following trick to increase your salary cap by millions. This works with or without fantasy draft. First, completely simulate the draft (faster) or you can pick your players yourself. Trade for all the players you want. After satisfied with your team , have one extra player in every position. Select a player, go to "Edit Player", then to "Information". Go down to position and change the players position. Then, release the edited player. Resign the player (his wanted salary is a lot cheaper). Do this to all your players except the extra ones, which you should get rid of. For an great FB, turn Jamal Lewis (HB) into a FB. All line backers make good DEs. Turn QBs into WRs (except M. Vick, who should be turned into a FS). Turn HBs, FBs, and TEs into MLBs. Turn all OL into DEs. Turn all DL into OL. Turn all LBs into HBs. Turn all WRs into HBs. Turn all DBs into WRs. WRs, SSs, FSs, and CBs, are difficult to do this with trick. First, you have to have them TEs for one year, then in the next offseason turn them into LBs for a year. You can then release them, resign them, then turn them back to what you had them at originally.

With a player named Troy Siegel (a drafted rookie three seasons into a franchise), Al Micheals will call him "Simian" in his commentary when he makes a play.

When under two minutes in the second or fourth quarter, when a play is questionable press RT + LT when you return to the play selection screen. Booth will then review the play most of the time it is overturned.

When on offense, select an offense with three receivers. Trip Bunch in Single Back formation works very well. Put the defense on goal line Zone CB cover. By doing this, no one rushes your QB, and once your receiver gets past the zone, they are left unguarded in the endzone for a guaranteed 48 points per play almost all of the time. This should work with most short zone coverages and does not take many attempts to learn which receiver to pick, mostly anyone running a long slant.

If you throw a touchdown pass and your receiver catches it on the goal line and it is ruled a touchdown, it will add a touchdown to your stats. If the other coach challenges the touchdown and it is called back and put on the inches line to the goal, you will still have thrown and caught a touchdown.

After you score a touchdown, go for two. Select the play "FB Run". Snap the ball, run up a little, then dive into the endzone. Your fullback should dive over the linemen and go into the endzone. This works about 95% of the time.

Be a defensive lineman and back up a few feet. When the play starts, immediately run forward and hitsick an offensive lineman. He will fall down and your person will still be running fast towards the quarterback. Then, sack him. Pause game play, then go to the settings. Go to the penalties, then turn off offsides. You will now be able to hold Run and never cross the line of scrimmage. Grab a linebacker and set a new record for sacks in a game. Line up in the 4-3 defense and run the LOLB Blitz, and use it every play. You will get between five and ten sacks per game. This is also a good way to develop young linebackers. Go to the settings and turn off offsides. Get a fast runner, go to the line of scrimmage, and keep running. He will be running in place. When the QB calls hike, he will run past the defenders and get a sack. This works about 80% of the time.

When playing against the CPU and it is a punt or field goal situation, switch to the end player on defense. If the opposing punt team is in a regular punt formation, select punt block on defense. The offense will adjust to a protection formation. If not, this is easy. Before the last player makes his adjustment, he puts his hands on his knees. If you begin to charge at the kicker you should not get a penalty if timed correctly. You will get an extra jump on the kicker and should tackle him or block the punt or field goal.

This trick works with any kicker. When you are kicking off, select "Onside Kick" when the return team is switching formation. When they are set, take the power bar all the way to the top, but do not select it. Bring it all the way down so that the power is at 31. Next, make your accuracy 97 to 99. The ball will hit the ground and go up straight up in the air every time. Have one of your Kick Off that is close to the ball sprint toward it. This makes all your players follow, and you will get it every time.

Pump Up The Crowd

Before the snap on defense, click the Left Analog-stick to pump up the crowd and make them louder.

Use the following trick to complete 30 years of franchise mode easily. First, start a new franchise. When asked to pick your team to play the franchise with, choose all of them. After that, start your franchise but do not play any games. First, simulate pre-season. Then, simulate regular season and continue to do that until you have unlocked an achievement (about years 2033 or 2034) and get your 400 points.

To get the Golden Donovan McNabb Card just enter 8Q2J2X.

We have no unlockables for Madden NFL 06 yet. If you have any unlockables please submit them.

We have no easter eggs for Madden NFL 06 yet. If you have any unlockables please submit them.

We have no glitches for Madden NFL 06 yet. If you have any unlockables please submit them.

We have no achievements or trophies for Madden NFL 06 yet. If you have any unlockables please submit them.

Submit a cheat for Madden NFL 06