Use the above links or scroll down see all to the PlayStation 2 cheats we have available for Madden NFL 2003. 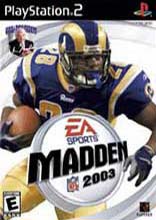 When you run or pass the football run to the sideline by the touchdown hold the turbo button and push sqaure to dive. They will dive out for the touchdown.

Get A Few More Yards

When you are about to go out of bounds and want to get more yards, juke to the side away from the sideline. You will not go out, and it also sometimes delays the defense from pursuit.

Get a gold rank in Clutch Kicking Drill in mini- camp mode under the All-Madden level.

To easily break tackles as a running back, alternately press L1 and R1 immediately before you get tackled.

Have a saved game file from an EA Sports racing game on your memory card.

Get a gold rank in QB Precision Passing (St. Louis Rams) under the All-Madden level.

Go to the help menu, then hold Square and press R1 or L1 to change the music.

Have a saved game file from another EA Sports football game on your memory card.

When down in a game late and need yards, substitute your second string RB in and put your first string RB in at QB. Off the hike, you can either run or throw it. If a space is open, you will get more yards.

To kick an onside kick, keep the arrow where it is. Do not move it. Then, tap X(2) as quickly as possible. You should recover the onside kick the majority of the time.

How To Get Any Player

First go to features. Then select creat a player. Then make up a player and put the states all the way up to 99. Then save the game. After that go to roster, free agents, and then put him on your team. Then go to trade players and put him up for any body you want but the players you want have to be on the same team! After trading save the game. Then go to roster, then go to feiw roster and go to the player you just traded and lower his stats to 0 (so you wont trade a great player! If your on franchize mode go to creat a player and select the players name and put his ststes to 0! THIS CODE CAN WORK MORE THAN ONCE!!!!

Before you enter franchise, or tournament go to features. Then go to rosters and trade players. You will be able to get anyone you want. Like a 60 for 99

When playing football 101 you can get more tokens by doing special moves when on your way to the touchdown.

When playing a friend, call hot routes to trick your friend into thinking you are passing the ball.

Get Barry Sanders As A Running Back

In Mini-Camp, get Gold on the Running Back challenge on All-Madden and you will get the Barry Sanders Historic Player Madden Card. Then, hit 'Add to Free Agent List', and then go to Rosters and go to the Free Agent list and he will be there.

QB & WR Getting A Lot Of Yards

If you have a hard time getting yards with your QB & WR, then this might help. First, get a QB with good arm & good accuracy (at least 90 for both) & WR with good speed, agility, acceleration,& catch (again, at least 90 for all). Then, play a team with a fairly bad secondary (around 70-80 for secondary at least). Start the game & when you have the ball, call a Hail Mary. Throw it to the best WR you have. Make sure you lob the ball, & then throw it to him. About 95% of the time it can go for at least 50 yards, unless your under 50 yards away. You'll get tons of yards in that game, especially with your QB.

Create a QB and make him 99 in awereness,throw power, and throw accurecy. He will be 99 overall. Sign him on your team, then trade him for someone you want. the team will eccept it no matter what. Then, go to create player and take his stats and put them back down to 50. If you want to be really mean, make his states all zero or change his name to Fatty or something.

If you are thinking about making a challenge, just go ahead & challenge. If you pause the game & look at the Instant Replay, it won't let you challenge the call on the field.

If you own NCAA Football 2003, and you have a profile on it, this code is for you. When you first start Madden, you can instantly recieve free Madden Cards from your NCAA profile.

Set the system date at July 4.