Use the above links or scroll down see all to the Xbox cheats we have available for Madden NFL 2003. 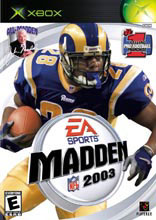 Win a gold medal in the running-back drill in mini-camp to unlock this character. His attribute points will be "92".

To change the music, at the main screen hold X, and the help menu will pop up then press L or R and the music will change.