Use the above links or scroll down see all to the PlayStation 2 cheats we have available for Marvel: Ultimate Alliance. 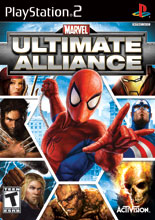 What do you do after you place the bead in the middle of the throne room? Two Doors open from the side but not in front of you.

To complete all the Comic missions easily and unlock Silver Surfer and get gold at the same time, wait and play all the missions at the end of the game when your characters have leveled up and have decent powers. If some are still to difficult to complete, play some Versus mode missions with those characters to level them up and/or pick up some Shield Tokens to add to their costume.

When you get to the end of the mission to battle Ultimo, run back to the door you came in. Ultimo is so big he cannot pass the edge of the room he is in. You can just keep hitting him with your ranged attacks, then when needed, fly in and collect the health and energy vials he drops.

Character specific gear is very valuable. When picking up character specific items, such as "Iron Man's Coil", it is described as doing +3 Damage and +3 Rocket Uppercut. This is not +3 to damage for the hit; it means that it adds three dots in the Powers area. With this single item you can go from 129 Damage to 289 Damage.

In Murderworld you may come across the claw machine with toys in it. Walk over to it and play it, when you get it right you will have rescued Blade. In return the hero Blade is unlocked, feel free to got to a S.H.I.E.L.D access point and switch out a character for him.

You know those computer things that you play trivia on? They can help your hero level up, but I would strongly advise you to get info on anyone you can FIRST. Doesn't matter what just talk to them because the trivia asks about EVERYTHING. Also if you answer the whole thing you won't get anymore points out of it so if you guessed incorrectly on a lot you won't get another chance.

Do those pesky enemies get on your nerves when they have a better weapon? Like the Fire Giant's big ol' sword or the Loki Troll's mace? Well you can steal it from them. When you are near them press the square button to grab it then a shape will appear on the screen. That means 'press this button repeatedly to steal' but be careful, if you don't do it right the enemy will get mad and beat you with it a few times.

While in gameplay, press Left, Right, Down, Down, Right, Left, Start.

Go to the shield safe zone and press Up, Left, Down, Down, Square, Circle, Start.

Go to details to show your team then press Down, Left, Left, Up, Right, Up, Down, Left.

At the review menu, press up, left, left, up, right, right, up, start.

In team menu select a hero and then, press:left, right, right, left, up, down, down, up, start.

How To Level Up Easy

First you need to be in Mephisto's realm and you need Touch of Death: Press Left, Right, Down, Down, Right, Left, Start during game play. In the area where you throw the demons in the Lava, go to where they pop up and keep pushing X or O and you will level up extremely fast.

Go to Hero Management and enter: Up, Up, Down, Down, Left, Left, Left, Start. You will hear a sound after you press start.

Press Left, Right, Right, Left, Up, Up, Right, Start at the Review menu.

During gameplay, press Up, Left, Up, Right, Down, Right, Start.

Press Left, Left, Right, Right, Up, Down, Up, Down, Start at a S.H.I.E.L.D. Access point (where you select your team). A sound will confirm correct code entry.

When your walking press up, down, up, right, up, left, down, up.

Up, Up, Up, Left, Right, Left, Start at team menu or at hero management.

We have no unlockables for Marvel: Ultimate Alliance yet. If you have any unlockables please submit them.

We have no easter eggs for Marvel: Ultimate Alliance yet. If you have any unlockables please submit them.

We have no glitches for Marvel: Ultimate Alliance yet. If you have any unlockables please submit them.

We have no guides or FAQs for Marvel: Ultimate Alliance yet. If you have any unlockables please submit them.