Use the above links or scroll down see all to the Game Boy cheats we have available for Mega Man Xtreme 2. 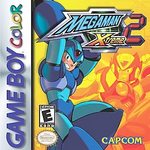 If you already have Boss Attack, you'll notice that X does not have his armor, and both Zero and X don't have Giga Crush or Final because they don't have the armor. If you want Final, Giga Crush, and X's armor for Boss Attack, Hold down the Select button while selecting Boss Attack by pressing the A button. Voila!!!!

The first one is easy all you have to do is go to wire sponges level. Go underneath the elevator and that's #1. #2, go to Overide Ostriche's level. Right before the second motorcycle ride the're is a ladder do a midair dash to get to it. #3, you need zero to have thunder from wiresponge to get this one. Go to drill rino's place.after you fall down the pit with the robot go to your left. You will see a door blocking your way. Get next to the door and use your thunder and vwala that's three body parts for zero.

After getting X's arm part, he will only be able to use two DNA items, so if you like your DNA item setup DON'T GET THE ARM PART!

Get All Of X' Armor In X Treme Mode

Get over 2000 DNA souls and go to PARTS, then there should be a "create an armor". Buy it and get all of X'S armor.

Get The Body Part For X

Go to the underwater level and go up each thing that shoots up water. One of them will take you to a boat thingy. Get on it. Shoot the thing that looks like a plane cockpit on it with your "Buster" (to save energy) over and over. Eventually it will blow up. Now while its blowing up stay on it! When its finished blowing up you will fall into a secret place. In there you will see a worm miniboss. Kill it and go on. You will see a ladder. Dont go up this ladder! The body part is a bit past it.

Get The Foot Part For X

To do this you have to have beaten Flame Mammoth. Go to the forest level and you can see it! Just use the fire thingy on that block in front of it and you can get in to it!

Get The Arm Part For X

To get this, you MUST (!) have the foot part or you cant get it! Anyway, go to the "Flame Mammoth" level and look for a bit of ceiling that looks like its a bunch of squares. Dash up (up+a) into the squares so that thre are some left to hang on to. Keep dashing up this way and there it is! The Arm Part!

Get X And Zero's Armor In Boss Mode

Press select as soon as you enter boss mode. If you do it correctly X and Zero will have their armor.

Beat Xtreme mode and collect over 2000 souls for Boss mode. In this mode you get to fight bosses from Megaman Xtreme and Megaman Xtreme 2. How fast can you beat them.

Beat X mission and Zero mission in order to get Xtreme Mode.

Go to the third Sigma Stage then before you enter in battle with Berkana there is a room fill with electricity. Go to the top and then you'll find the ninth capsule containing the handuken and the shruryuken. Must pick Megaman X in order for this code to work.

We have no cheats or codes for Mega Man Xtreme 2 yet. If you have any unlockables please submit them.

We have no unlockables for Mega Man Xtreme 2 yet. If you have any unlockables please submit them.

We have no easter eggs for Mega Man Xtreme 2 yet. If you have any unlockables please submit them.

We have no glitches for Mega Man Xtreme 2 yet. If you have any unlockables please submit them.

We have no guides or FAQs for Mega Man Xtreme 2 yet. If you have any unlockables please submit them.