Use the above links or scroll down see all to the PlayStation 2 cheats we have available for NBA Live 06. 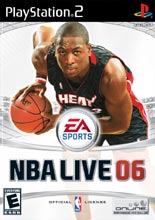 Throw Ball To Self

Press R3 to throw the ball up to yourself.

Before taking a shot, pump fake then take the shot. The defender shouldn't challenge it and your shot should be like a open shot.

Have a friend or just have you get ready to pull the conroller out of the ps2 when your guy comes up. Your first shot has to be a good one. This is the time to be by your ps2. When your turn begins press R1 to pick up the ball and press either sqaure, circle, or X to shoot the ball. Right after you realese your first shot using any of the shoot buttons, quickly unplug the controller. Now your player will automatically pick up the ball and make every shot to get a perfect score. You can plug in the controller once your turn is has FINISHED!!

I've traded a couple people on my dynasty with the Pacers. I've traded Artest and Tinsley. You can trade Tinsley for Micheal Redd from the Bucks. You'll lose a point guard though, no worries. You can put Fred Jones at PG. He's just as small and better than your other PG's. I like to play Eddie Gill though. If you look at my hint above you can trade Artest for Anthony or Richardson. Then you will have a pretty good lineup. The pistons have the best lineup. Heres my starting lineup. Johnathan Bender-C, J'O-PF, Jason Richardson-SF, Micheal Redd-SG, and Eddie Gill-PG.

If you start a dynasty or season with the Pacers you can trade Artest for better people, here are the people that accepted: Carmello Anthony, Denver Nuggets, Jason Richardson, Golden State Warriors, Yao Ming, Houston Rockets. They might take Vince Carter or Richard Jefferson on the Nets. But the three above I know they will take.

To do a 720 dunk hold R1 and tap triangle then quickly rotate the left analog stick counter- clockwise and press triangle, circle, x, or square. If done correctly it will be a 50.

Go to My NBA Live from the main menu. Then go to cheat codes. Next, type in 743HFDRAU8 to get the red and white Jordan XIV's.

This codes are to unlock the new jerseys for the Indiana Pacers:

Enter the code as follows: XWETJK72FC

Enter the code as follows: 9922NVDKVT

Enter the code as follows: 193KSHU88J

We have no unlockables for NBA Live 06 yet. If you have any unlockables please submit them.

We have no easter eggs for NBA Live 06 yet. If you have any unlockables please submit them.

We have no glitches for NBA Live 06 yet. If you have any unlockables please submit them.

We have no guides or FAQs for NBA Live 06 yet. If you have any unlockables please submit them.

Submit a cheat for NBA Live 06