Use the above links or scroll down see all to the PlayStation 2 cheats we have available for NCAA Football 2004. 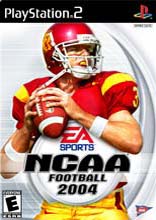 To make the best team all you have to do is go to rosters after you have chosen your team and press X on the player you want to make better and press Xon ratings and you make your player the best at everything and you can do that with every player. The max in the ratings is 99. Just remember to save it or you will go crazy like my friend that forgot to save and really got crazy.

Reach level 2 in your EA Bio.

During your opponent's extra point or field goal attempt, move one of your defenders in position to block the snap. The ball will bounce off your defender and act as a fumble. However, the kicker will still be able to kick the ball, even if it nowhere near.

If you go to the rosters, you can edit a player's ranking skills. Set catching, carrying, and speed as high as possible for a cornerback and you can make him an effective wide receiver for your team. However, if he drops a pass Lee Corso will say " He's better at deflecting passes than catching them!" Note: Corso only says this if he was not already set as a receiver. The message usually is heard with a created cornerback put into the WR position.

When on offense, set a person in motion. If he is followed, the defense is using man-to-man coverage.

Play several games at the Heisman level, however alter the AI settings in the settings menu before playing. Set the CPU levels at their lowest, and the Human levels at their highest. This will force the CPU to make a lot more mistakes and you to allocate challenge points, which can be used to purchase pennants and unlock other secrets within the game. The play level is still very difficult, but with your added AI, you should be able to be successful.

Reach level 8 in your EA Bio.

Reach level 4 in your EA Bio.

When you score a TD, the word "Touchdown" appears. When it first appears, press the following button combinations. Note: This could also get you an 15 yard Unsportsmanlike Conduct penalty.

We have no unlockables for NCAA Football 2004 yet. If you have any unlockables please submit them.

We have no easter eggs for NCAA Football 2004 yet. If you have any unlockables please submit them.

We have no glitches for NCAA Football 2004 yet. If you have any unlockables please submit them.

Submit a cheat for NCAA Football 2004