Use the above links or scroll down see all to the Dreamcast cheats we have available for NFL 2K1. 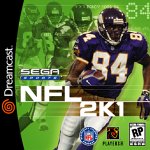 Start a game and then pause it. Go to options and turn off all the penalties and you can do what ever you want.

Go into exibition mode. Pick any two teams to face each other. Pick the stadium called Practice Facility and when the game begins there will be no crowd, just the two teams, ref.

Play As Deion Sanders At WR

Get a user record then get first place in everything then go to the free agents and place him on your team.

Select an out pattern and have Randy Moss catch the ball. Sometimes if you throw it at just the right time and he catches it. If you run down the sideline your almost guaranteed a big gain.

Go undefeated in Franchise Mode for three years straight, with over 1,000 rushing yards each year.

Go to create a player then make his weight 400 pounds and 7 feet tall. Then in attributes make the upper and lower body strenght down to 60 then you should be able to make it even out 100's.

When the kicker kicks the ball then quickly press Y over and over again, this will make the kicker run much faster toward the kick returning guy.

Sacking The QB Or Punter

Go to the penalty setting and take off, offsides and encrochment. When done pick a play and choose any defensive player you want to get the sack. Stand behind the teams offensive line or around the QB or punter. As soon as the QB hikes the ball tackle him, As soon as the Punter gets the ball do the same. Results should come out a sack!

When your opponent is going to kick a field goal/ extra point, pick any play. When the players line up, rapidly tap Y and B, this will cause a player to jump, then switch to the next player, jump, and so on. Keep pressing the buttons until the ball is blocked or kicked. This will greatly increase your chances of blocking the kick!

To do this you must make your running back 6 feet & 2 inches. After you are done with that, go to Speed Running Back and put the last 2 attributes at 35 & 32. Then you should have enough points to put everything at 100!!! After that it should be very easy to score!

When you are making a custom player make him 5 feet and 400 pounds and make him defensive end. Make his speed, pass rush, run rush, tackle, and agility 100. Make his jump zero. and everything else between 75 and 85. If you have extra points, use them on jump.

To play as legendary QB Dan Marino, just go to customize, and sign, or customize, teams, and sign and Dan Marino will be a Free Agent!

First you must create a new team of your choice and then go to the Create Player option. After you have created a player, assign him to your new team. Once you have your new player assigned, you can go back to where you previously created your new player (CREATE PLAYER FILE ONLY) and delete him from the menu. You will notice that your player is still assigned to your created team. Do not delete him from the team.

This is probably the hardest code to get but it's really cool to see. All you have to do is beat the season on all pro with any team. The helmets are pretty fake looking but it's worth it. Did I mention you have to be undefeated?

Ok go to customize screen then create a player. Then go to Fantasy draft and choose 4 teams, hit the START button pass through the select team screen then pass through the setup name screen. Then press START button they will ask if all participants are in the right order hit START again. While going through the draft hit start you will then be asked for the CPU to complete draft click yes after the draft is done quit fantasy draft and then go the franchise mode. Now a warning will come up telling u that your fantasy data will be lost click yes then it will bring u to the franchise setup, then enter information. Make sure u don't choose fantasy draft. now go to management then go to signings and sign your created player and there you go.

When other team punting line up on the left side of the screen just of the line of scrimmage and as soon as u see the arrow and the power go up run and get the punter for an easy sack.

If you are the Redskins and you play a Fantasy draft then you can draft John Riggins #44 the Redskins old running back.

When the arrow is shown and you are on defense, press Y to get an audible and then B. Keep repeating pressing Y and B real fast. Doing so will make the players spinning around. When the ball is snapped the players will run through the offensive line and block the punt.

When you choose your team go to home or away options press A on uniforms and it will say throwback uniforms.

Play as the Houston Oilers

When playing NFL 2k1 go to exhibition pick Tennessee Titans and go to home team or away team options go to current uniforms and press A it should say throwback uniforms start to play the game and you will be playing as the Houston Oilers!

At the play selection screen when on offense, press A(2) to have the CPU pick the most effective play.

At the play selection screen when on defense, press A(2) to have the CPU pick the best play to stop your opponent. However, do not press A(2) on 4th down, because the CPU will not select a punt return, or field goal defensive play.

We have no easter eggs for NFL 2K1 yet. If you have any unlockables please submit them.

We have no glitches for NFL 2K1 yet. If you have any unlockables please submit them.

Submit a cheat for NFL 2K1