Use the above links or scroll down see all to the Xbox cheats we have available for NHL 2003. 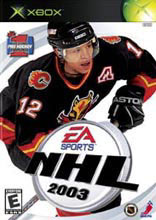 Use NHL Player's Face And Picture For A Created Player

When entering a name for a created player, use an existing NHL player's name. A prompt will confirm that the player is in the database and then ask if you want to create a player like him. Select "Yes" and you will receive his face type and picture for you player. You can then enter any name and stats once you have finished.

Get the puck to the offensive zone near the blue line. Hold Deflection/Short Block while shooting. One of your players should skate to the front of the net and deflect the puck in.

Create a player and enter one of the following names. The game will complete his abilities and stats. Some players will also have a portrait.

Most of the real-life EA Sports personnel who worked on making the game are available as hidden characters. To access the EA players, go to the create-a- player section and input any EA Sports personnel name, which can be found in the credits section towards the back of the instruction booklet. Most (but not all) of the names exist as hidden players, including several names from the "thanks" list, along with commentator "Jim Hughson", rink announcer "Jon McComb" and Vancouver Canucks coach/NHL 2003 strategist "Marc Crawford". If you play in franchise mode, these players will occasionally appear in the rookie draft for you to sign. Note: The female Christian names have been substituted for viable male alternatives: e.g. Susan Smith is "Steve Smith", and Christine Staples is "Christie Staples". You will have to experiment to work the girls out. If you can be bothered to create enough of the players, you can fill out the EA Blades and EA Storm Custom Teams with actual EA Sports players to give you a further two teams to play with. At the created player screen, enter various names of real players that do not appear in the rosters (such as "Eric Lindros"). Their exact profile and face will appear. Create a player using one of the following names of members of the Bare Naked Ladies: "Jim Creeggan", "Tyler Stewart", "Steven Page", "Ed Robertson", or "Kevin Hearn". The game will adjust the players face and statistics automatically to match that band member

If you are skating with someone that has a very high rank in the Deke category such as Joe Sakic, Paul Kariya, etc., once you get past the opposition's blue line, press Down, then press Auto Deke. Immediately after he is done with the Deke, press Shoot. You will score about 95% of the time.

We have no easter eggs for NHL 2003 yet. If you have any unlockables please submit them.

We have no glitches for NHL 2003 yet. If you have any unlockables please submit them.

We have no guides or FAQs for NHL 2003 yet. If you have any unlockables please submit them.