Use the above links or scroll down see all to the PlayStation cheats we have available for Resident Evil 3: Nemesis. 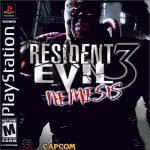 The only way to see Barry is if ending B is unlocked. To get this ending, jump off the bridge when fighting Nemesis Type B. After the jump off decision, the final area of the game will take a somewhat different path. You will have to fight off Nicholai in a chopper. It is recommended that you bring a Magnum and Grenade Launcher (or Rocket Launcher if it has been found). You can also choose to negotiate with him.

The best 3 weapons to use against Nemisis are as follows:
1st - The best weapon to use against it out of all the other guns is the Magnum. To get ammo mix 3 C gun powders together (A+B=C, C+C+C=Magnum Rounds)
2nd - The Grenade Launcher with Grenade Rounds, but if you want to slow it down use Freeze Rounds. To get Grenade Rounds you have to use 1 C gun powder, to get Freeze Rounds you have to mix 2 C gun powders (A+B=C, C=Grenade Rounds, C+C=Freeze Rounds)
3rd - last but not least, the Assault Rifle. UNFORTUNATELY, you can't mix any of the gun powders to get ammo for it so save it for the last few battles with it, The Trolley, The Clock Tower's Courtyard and twice at The Dead Factory.
If you start on Easy Mode, you get the Assault Rifle right off the bat. Once you get to the chest in the warehouse there is a pistol, 250 bullets, a knife, an Infinite amount of Ink Ribbons, 2 100% Assault Rifle Clips and if you previously beat it and clicked on Next Game, The boutique Key.

When in a sticky situation where you need to dodge an attack all you have to do is hold R1/R2, start shooting, hold on the X button so you are constantly shooting, and hold either the left or right button on the D-pad and you should dodge every attack thrown at you. The only downfall is that when you have to reload, then you might get hit. If that happens and you don't want to get hit, hit the O button to take you to the menu, combine ammo with the gun, exit and go back to the technique and you'll be back in business. This works surprisingly well against Nemisis, who can be an extremely big threat.

No Time To Waste!

At any time in the game where there is a movie thats apart of the game you can take a short cut through them by persing up, start, select at the same time. If it does not work tray it in this order up, select, start. For in example when jill runs up to the doors of the police station and brad runs in and screams help you can just enter this code and you'll go right to the part where you fight nemeiss. It also work for the murcenary mode when the cumputer tells you over and over agian that you have to get rid of the bomb in your body just enter the code and you'll go to the map.

If ther is a zombie facing the opposite direction of you, and you don't have any ammo, just simply tap the square button while walking behind them. This will make Jill practically glide behind them letting the zombies not hear that you are there.

It is as follows: obsidian ball-left,crystal ball-middle, and amber ball-right. Now this should make clock in picture strick 12:00 and it should reveal the second cog wheel.

The 3 Statues And Balls

When you are in the clock tower and get to the pictures on the wall and there are 3 statues holding a amber ball, obsidian ball, and a crystal ball, you place the amber ball on the middle picture, the crystal ball on the picture to the right, and the obsidian ball on the left. This should make the middle paintings clock pop open and reveal a gear that you combine with the other gear that you got to take to the gear place in the machinery room to make the bell ring. BEWARE!!! Right after the movie scene you will have to fight Nemisis.

It is most useful when fighting Nemesis. When he goes to hit you dodge it and if you roll backwards keep R1 or R2 held and you will sit in a squatting position and continue firing at him. The R1/R2 button must be held while you role backwards. Nemesis will try to punch you but your head will be to low for him to hit. He will continue trying to hit you and you can just sit there filling him with rounds.

Gun powder A is the red bottle, Gun powder B is the yellow bottle, and Gun powder C is the blue bottle.

Get A Magnum Of Game

Beat the game once and then load it and start a new one. In your storage box there should be a; Magnum, Boutiqe Key, Shotgun, and some M16 ammo. Also you will start with a M16!

When using the water sample machine in the abandoned Waste Processing Plant (Dead Factory), you will need to correctly align the three lines of the water sample to process the sample. The four possible solutions are:

This will unlock half of the lock to the door next to the elevator.

Get The Benelli Expert Shotgun

This is an easy cheat. The first thing you do is when you open that door and brad vickers comes charging out. You kill all the zombies and go down stairs. when you get down there pick up the lighter fluid for the lighter. then turn around and on the dead cops body is a shotgun. Pick it up it is the benelli expert shotgun.

When you first enter the police station gate you encounter nemesis and you can decide to run inside or fight. When this option comes up fight nemesis and beat him. After that nemesis should drop eagle parts A. Then when inside the police station you will have the chance to fight nemesis again. When this happens just defeat him again. After beating him a second time he will drop eagle parts B. when you receive both parts A and B just simply combine them and you will have the Eagle hand gun.

When you first get to the trolley, Carlos will give you a "fanny" pack. After you finish the game, you will keep those additional two slots in the game.

Successfully complete the game on the easy difficulty setting with any rank better than an F to unlock Jill's costume from the original Resident Evil and Regina's costume from Dino Crisis. Successfully complete the game on the hard difficulty setting with a rank of D to unlock two costumes, C for three, B for four, and A for all five costumes. The three additional costumes are a police miniskirt, disco, and biker outfits.

Weapons Locker in the Dead Factory

Use the factory key at the ultra violet ray machine. Then (when you aquire the key card)go thru the break room to where you started the generator. (That opened half the door near the elevator).Use the card that you got from the Dead umbrella employee.Then you go to the far awll and use the plastic key card.

Successfully complete the game once and wait for the credits to end, then save the "Next Game" file to receive the key to the Boutique on the first street at the start of the game. Use the key to enter and change into an alternate costume.

Successfully complete the game once on any either difficulty setting and wait for the credits to end, then save the "Next Game" file to unlock "The Mercenaries" mini-game. Start a new game, choose that saved game, then select "The Mercenaries" mode. This mode involves controlling Carlos, Mikhal, or Nikoli from the train to the starting room with a two minute timer. Killing the various opponents and rescuing civilians during the journey will add extra money and more time to the clock. A rank and money will be awarded after the game is completed. The money can be used to purchase better weapons and infinite ammunition.

Code For Safe In Police Station

We have no unlockables for Resident Evil 3: Nemesis yet. If you have any unlockables please submit them.

We have no easter eggs for Resident Evil 3: Nemesis yet. If you have any unlockables please submit them.

We have no glitches for Resident Evil 3: Nemesis yet. If you have any unlockables please submit them.