Use the above links or scroll down see all to the Xbox cheats we have available for Soul Calibur II. 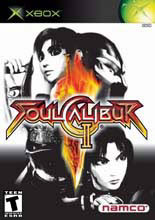 You must play as Nightmare. At any time during battle, press "X" and "B" together. The sword then goes behind the back of the character and when you press "X", it will unleash a slash attack.

Defeat the Merope Monestary twice. Then defeat the four edgemasters of Alioth twice each.

To play as one of the best characters in the game Berserker, In Weapons Master Mode go to the land called Schedar, And play the dungeon called the Stone Temple 2 times. After you do this You will have unlocked Berserker.

Select arcade mode. After you choose your character; press A while the stage loads to hear your character taunt the second player.

Play the game in extra survival mode with the no recovery setting four times to unlock the home version opening.

Successfully complete extra arcade mode with any character to unlock extra vs. mode.

In weapon master mode, complete the southern-most mission of chapter 3. When complete, a road will form to the south, into a "subchapter." The shop in this area sells all of the character weapon demonstrations.

In weapon master mode, get to chapter 6. Near the middle of the chapter, there will be a palace icon. This fight will be against Seung Mina. Defeating her will unlock her in all modes.

In weapon master mode, complete chapter 4. The final area (eastern-most) will be a dungeon, with the last Boss being Sophitia. Defeating her to unlock her in all modes.

In weapon master mode, complete chapter 3. The last area in chapter 3 (the eastern-most mission) will occur on the Pirate Ship level, and the last character fought will be Cervantes. When he is defeated, he will become playable in all modes.

In weapon master mode, complete chapter 2. The first mission in chapter 3 (western-most mission) will have you fighting Charade. You can only do a ring out to win this match. Defeating Charade will unlock him/her/it in all modes. Charade plays much like Edge Master/Inferno.

In weapon master mode, complete chapter 2. The last area in chapter 2 (eastern- most mission) is a dungeon area. The final "Boss" of the dungeon is Yoshimitsu. Defeating him will unlock him in all modes.

Get your opponent to the edge of the ring with Nightmere. Do a back and vertical slash. Your opponent will fly into the air and fall out of the ring.

At the vs. screen while the stage is loading, press L or R to make the characters speak.

We have no cheats or codes for Soul Calibur II yet. If you have any unlockables please submit them.

We have no unlockables for Soul Calibur II yet. If you have any unlockables please submit them.

We have no easter eggs for Soul Calibur II yet. If you have any unlockables please submit them.

We have no glitches for Soul Calibur II yet. If you have any unlockables please submit them.

We have no guides or FAQs for Soul Calibur II yet. If you have any unlockables please submit them.