Use the above links or scroll down see all to the PlayStation cheats we have available for Spyro The Dragon. 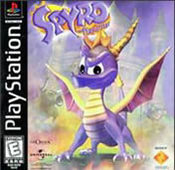 In CLIFF TOWN, there is some hidden treasue behind the large castle you begin in. Just go up to the dragon who says you're at "the highest point in CLIFFTOWN' and from there, fly behind the castle.

When in Metalhead, When You go throug that secret area in that one ditch, loook behinnd you. You should see a swirly thing that picks you up. Walk to it and you will be on top of a tower. Glide from tower to tower, collecting the gems (and extra life) on the way.

This helps during the game in many ways. When in a hard to land glide or just any glide, press down or back to make spyro backwing. Backwinging is where Spyro flaps his wings forward allowing you to land more easily in those hard to get to places, it is very accurate and precise so be careful when trying it on a really small landing spot. Use this to get on those really narrow cliffs and ridges. It works everywhere even if your just having fun with the manuver.(works really well when trying to get the key for the chest in Ice Cavern)

Use Byrd Without Paying Money Bags

This code only works in one level though. In molten crater there's a bridge in front of sgt. byrd's cage. Jump onto the smaller post. Now from the smaller post jump on the bigger one. Now glide and land on the top of his cage. Walk towards the wall behind the cage and you should appear in his level.

Before you enter a protal, exit pad, or balloon turn off the music and when you enter the area turn on the music. It won't work on Haunted Towers (Dream Weavers) but it will work on Cliff Town (Peace Keepers) and it will work sometimes it will work like Gnasty's Loot (Gnasty's World).

To get funkies flight, you just half to go to articians home and go to the water falls. Jump on all the 6 rocks and they become yellow. Right behind it the wall goes down and funkies flight appears.

Pause the game and exit the current level if faced with imminent death by falling. Note: This may not be done in the home levels.

Collect all the gems in every level to access a bonus level.

After you start a new game and before you push any buttons or go anywhere, pause and go to the inventory section. Press square X 6, circle, up, circle, left, circle, right, circle. Your lives will increase to 99 if entered corectly.

While playing the game, pause and go to the inventory section. Press square, square, circle, square, left, right, left, right, circle, up, right, down. When you go to the ballonist, you will have access to all levels! (Except Gnasty's Loot)

Beat the whole game, defeat Gnasty Gnorc without being wounded (I've tried that), press Square(5) and go to the balloonist.

When "Press Start" appears at the opening screen hold Down, L1 and Triangle.

We have no unlockables for Spyro The Dragon yet. If you have any unlockables please submit them.

We have no easter eggs for Spyro The Dragon yet. If you have any unlockables please submit them.

We have no glitches for Spyro The Dragon yet. If you have any unlockables please submit them.

Submit a cheat for Spyro The Dragon