Use the above links or scroll down see all to the Xbox cheats we have available for Star Wars Battlefront II. 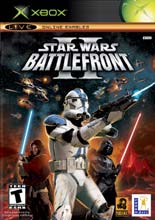 Become the rebels in hoth. Then get the code for invincibility. Get in a snow speeder and turn a sharp left. Go to the secret bunker, but stay in the air and go strait. land were there is no land and get out. You will then be walking on air.

On Hoth be the rebels, make sure you have the invincibility cheat on. Take a snowspeeder and turn half of a full circle right go forward and look down for a hanger and land. If someone is with you they die.

At Hoth, be pilot Luke and go to the AT-AT and jump on it's back. Than go to it's neck and start slashing it's head. Sooner or later you'll have to jump back to the ground a kill people for health but right after that jump back on it! You'll destory it before it gets in range with the base.

Permenantly Get Award Weapons And Upgrades

All you have to do is get your medal ranking up to legendary and you'll get the award it gives permanently. Example: Get Frenzy to Legendary to get the Elite Rifle permanently.

Go to assault in mos eisley and be a character that has force choke. Start choking someone. While still choking, switch to the other force keeping the force button down. Your force bar should regenerate while still choking the person.

Outside In Space Battle

We all see the cool giant capital ships in space battles but wouldn't it be cool to walk on the outside of it! Well you can first turn the invincibility cheat on ( Up Up Up Left Down Down Down Left Up Up Up Left Right) get into a ship which is easy. Next, take off and land and take off and land until half your ship is outside the shield. Last, hop out and walk around and if your close enough to a team ship you can jump on it. I mean the big ones not the ones your team fly!

It can be very hard to win in space battle but if you land in the enemy bace take out the auto turrets controller inside, that will give you an advantage than go destroy the shields when your done that go and get a gunship and go kill every on inside
ps: the gunship is for your team mates to spawn there.

HOW TO USE A DRODIKA

There are some myths about Drodikas that are NOT true. One is that a fussion cutter will heal a drodika's sheild and/or health. This is NOT true! However, there is an easy way to defend a command post with a drodika. Im sure you are familiar with going up to a friendly command post, switching to an engineer, throwing out some health packs and switching back to whatever class you like. Well the CIS has an even better trick. When defending a command post switch to a drodika. Then when your sheilds get low press Y to select your class. Pick a drodika again and your shields and heath will be restored! Also try and stay deployed with your repeating blasters at the ready. You may move slowly but elite players online will be able to kill you with any class before you have a chance to deploy, let alone put your shields up and kill them.

First, make sure your in instant action with friendly fire OFF. Then play on kashyyyk as the droids or empire. Next, get into a tank and use its boost to go over the hill and around the wall. Then destroy the wall and take over the command post. Now that its yours, become an engineer and fix the wall. Since the wall "technically" belongs to the clones and rebels, it will appear as a blue object when they aim at the wall controls, so they will not be able to destroy it. This will make it very hard for them to retake the command post.

How To Get Past Sea Wall On Kashyyk

To get past the sea wall takes speed, agility, and endurance. First of all do NOT become an engineer or anything of that sort go with a soldier or a man with a rocket launcher{if you get a man with a rocket launcher make sure you know how to use a blaster pistol efficiently
This is mighty simply run past their defenses and on the left side there is a wheel type thing on the wall destroy it fast and run away either trow bombs or shoot at it or rocket launcher.
To see what it looks like join the opposite side first{team hiding behind sea wall} and destroy it a few times to see where it is and what it looks like.

Quick Way To Get Marksman Medal At Corusant

To get your quick marksman medal at corusant you have to be on the rebel forces on galactic civil war of rise of the rebellion, or you can play with the droids. but anyway to start out become a assassin droid or marksman and try to be the very first soldier on the field and run to the hallway that faces base 4&3 (base 4 is the base with the chairs surrounding the command post)and make sure that when you get there a big huge crowd of enemy soldiers come out of base 3 (base three has the route shortcut to upper library) and snipe them down one by one. You should be able to get your marksman badge and if you can't get it within the first few clips of ammo or you run out of ammo just run a few meters and get health and ammo.

The at-at's weak spot is located at the neck If you get four of those you get a award.

Do you get angry when the enemy destroys your shields and you can't protect your systems? Not anymore! When they destroy your shields use the pilots fusion cutter to repair your shields. It will take a few minutes, but it is worth it.

Easy Jedi Kill On Rise Of The Empire

Go to single player and chose Rise of the Empire. Play the area till you get to Courasant: Knightfall. When you have to protect the bookcases choose a clone commander. Use his chaingun and it will kill the jedi easily.

If you want a co-pilot in your vehicle (If you're using a vehicle that can have a co- pilot). Put you target on an ally and tap up on the directional pad and your ally will be your co-pilot or on the vehicles turet. But on the AT- TA you need two co-pilots one for the turet on top and the one in the back.

The easiest way to kill a jedi is to run over him or land on him right??? WRONG. Trying EITHER of those doesn't work. I tried, and never succeeded. You have to be a non-jedi for this to work, and you have to have friendly fire OFF AND you must be on a place like UTAPAU where you can fall to your death. Lure the Jedi/Sith you need disposed of toward an edge of a cliff or platform, and if your an assault-type place a mine, but if your not wait until they are within striking distance and place a Thermal detonator at your OWN FEET, and wait for them to approach, then run as they are blown up and off the cliff/platform.

Sometimes it's very hard to destroy AT-ATs and AT- STs. Not anymore! Make sure you are a rocket guy and have mines selected. When a vehicle comes in front of you, toss an arssenel of mines below its' step. Make sure you have frienly fire of or you'll kill yourself!

Multiy player only! Do heros v.s. villans and be heros. Pick Yoda and go to one of the purple banner things with the crate under it. Go right up to the wall and jump untill you get to the edge of the purple thing. Jump one more time and while jumping move forward. If done correctly you will be inside the house and the walls will be invisible. Since your Yoda use force pull on a villan and keep doing it untill there right infront of you. Whoever it is can not see you since your inside the house and you can attack enemeis inside the house so its an easy way to rack up kills.

All you have to do is go to Hoth 3 times. And the last time you go to Hoth, you will be a Wompa! And plus..... do not forget to also be with the Empire 3 times.

Create a profile under the name 'nothing' (do not capitalize it!) and if you get killed the caption will say "Unit365 killed nothing" or "nothing killed Unit365"

At the start of the level press start. Then press Up, Up, Up, Left, Right, Down, Down, Down. You should hear a noise indicating you got it right.

SINGLE PLAYER ONLY! During your game, pause, and enter the following on your directional pad or left thumbstick: Up, Down, Left, Down, Left, Right. You should hear a noise indicating you entered it correctly.

Single player or Multiplayer. During your game, pause, and enter the following on your directional pad or left thumbstick: Up(x4), Left, Up(x2), Down, Left, Down, Up(x2), Left, Right. You should hear a noise indicating you entered it correctly.

SINGLE PLAYER ONLY! During your game, pause, and enter the following on your directional pad or left thumbstick: Down(x3), Up(x2), Left, Down(x5) Left, Up(x3), Left. You should hear a noise indicating you entered it correctly.

We have no unlockables for Star Wars Battlefront II yet. If you have any unlockables please submit them.

We have no easter eggs for Star Wars Battlefront II yet. If you have any unlockables please submit them.

There is this glitch on kashyyyk were you get ammunition without an ammunition droid, without being a smuggler or engineer, or by picking up canisters. You know those platforms above the ground that make good sniping spots and were the turrets are at. Well if you go to the first platform while crossing the ocean and face toward base 2 somewhat in the middle you will see the red circles indicating that you are gaining ammo. This glitch really works! I was amazed when I first saw it happen I hope you can figure it out.

While choking someone as sideous, hold L and switch to Lightning. The person your shocking will still act as if they're being choked and shocked at the same time. Their health goes down twice as fast too!

As in this glitch should take you more then 1 minute. First to make this easier you might want to turn on the invincibility code and be a jedi with push. For this all you must do is make an enemy fall in the trap door buy jabba and have the monter down there eat the enemy but u must kill him when he is in the monster mouth for all of the potions to come out about 20 potions will fly out in the area. This is a fun glitch.

We have no guides or FAQs for Star Wars Battlefront II yet. If you have any unlockables please submit them.