Use the above links or scroll down see all to the Game Boy Advance cheats we have available for Star Wars: Jedi Power Battles. 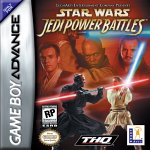 Use this trick to defeat Darth Maul in the second bout (after the first room but before the room with the circular hole in the floor where you eventually defeat him). Because you are on the narrow walkway, hold R to block attacks and study his attack pattern. When the break comes, release R and press A to attack. Keep going until he runs away.

Defeating The Attack Droids In Level 5

The Boss for the level 5 is about ten attack droids (similar to Droidikas) that float in the air. This makes it impossible to attack them from the ground. To defeat them, reflect your fire back at them with the lightsaber block. Be careful -- their hits will fill up your lightsaber reflection gauge quickly, but there is a health boost in the northern part of the Boss' arena.

Defeating The Giant Droids In Level 4

The level four Boss is two giant droids that have a weaker electric beam attack. To defeat them, lure them out of the corners that they are in. It is easier to fight them one at a time. Go up and attack them from behind. Use Force Attacks and Power Attacks. It will take three to four Force Attacks and five to eight Power Attacks to take out each of them.

Defeating The Star Fighter In Level 1

To defeat the Star Fighter (the flying vehicle), get as close as possible to it and press R to deflect its shots.

Defeating The Gungan Guard In Level 2

To defeat the Gungan guard Boss, block his attack with your lightsaber, then hit him with the Power Attack (L), or if you still have the Force power hit him with a Force Attack (hold R then press L). Hit him ten to twelve and he will walk off.

Defeating The Tank In Level 3

The level 3 Boss is resembles a tank, and is the biggest challenge yet. It shoots an electric beam that can penetrate your lightsaber from close range. Wait for it to stop attacking then run up and hit it with a Force Attack (hold R then press L). Hit it until you have no more Force power, then run up behind it and hit him until he explodes.

Enter the code VMT3BYJ and you may play as Darth Maul.

Go to resume game and type in VCJ0XYK. Now you can play as Darth Maul on any level.

We have no unlockables for Star Wars: Jedi Power Battles yet. If you have any unlockables please submit them.

We have no easter eggs for Star Wars: Jedi Power Battles yet. If you have any unlockables please submit them.

We have no glitches for Star Wars: Jedi Power Battles yet. If you have any unlockables please submit them.