Use the above links or scroll down see all to the PlayStation cheats we have available for Syphon Filter. 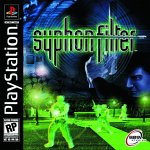 To Survive The Burning

After catching on fire, quickly press start then press start again. Note: You will be a little hurt but still alive.

Get Characters From Syphon Filter 1

Finish the C-130 wreck site and unlock characters from the original Syhon Filter.

On the first level you can control where you land with your parashoot (or however you spell it) now control yourself in the direction of the 3 men and the flares try and land yourself on top or so your hanging off of the cliff right above them and there it is in the ammo box.

Two For One Deal

When there are 2 guards patrolling and you can't be caught, wait for the gaurds to stand side by side where you can only see one of them. Take out the sniper rifle and shoot the first one in the obvious place (the head)and it will go through his head and into the other gaurd's head, and you only had to waste one bullet! And on top of that you didnt waste time or get caught.

In the new york sewer level you get to the checkpoint where you shoot the 4 guys with m- 79s. You go up the stairs and shoot the agents. Then when you see a door keep going up the stairs. Shoot the rest of the guys with your m-79. When you reach the top of the stairs there will be a case. Open it. It is a m-79. Gabe will say got it. Finish the level and you have all characters.

To select the Colarado Rockies as a selectable level in multiplayer make it to where Chance is. Then get the H-11 by the waterfall. "Save and Quit" your game at the Options mode and save it to your memory pack. Then quit and you will have the Colarado Rockies level or whatever the first level is called.

When you go to the highest point on level one and get the tansponder to work. When you are on your way back look to your left and and go to the edge and crawl down to hang on to the cliff (press walk when going to the cliff to crawl down and hang) move left and you will find a box which has the air taser.

In the expo center level, shortly after passing through the mars exibit, you will come across two gaurds looking at a dirty magazine. Wait a second and kill the guards. When they are both dead collect the dirty magazine to unlock the Pharcom Lab multiplayer arena.

The only way to defeat Rhoemer (the final boss) is with Gas grenades, which can be found in the upper right room of the last level.

Find the card keys to get through the gates in the museum. Check all the guards and people that are killed; they usually carry card keys. For the gate in the Rocket Room, shoot the control panel on the third level that keeps sparking while your character is standing on the elevator to reach to that level. The man with the card key is up there.

Go to the opposite end of the subway after it explodes. Use the flashlight on the left of the tracks to find the C-4. Get the C-4, then go to the right hand side. Look up to see the upper level. Press Triangle to climb onto the red crate. Press Triangle to keep climbing up through the debris until the top is reached. This is the only way to exit the lower level.

Go out the window in the bar into the back alley. Look up to see two fire escapes. Climb onto the dumpster and get onto the fire escape opposite the bar first, then jump up to the pipes and go hand over hand to the other fire escape. Be careful, because two terrorists will run out to shoot half way across the pipe. After taking care of them, drop down onto the fire escape and open the box for the grenade launcher. This makes the grenade thrower in the subway section much easier to handle.

The virus scanner may be used to look through the walls to find enemies.

After catching on fire, quickly press Start, then press Start again. You will be hurt, but still alive.

Go to the opposite end of the subway after it explodes. Use the flashlight on the left of the tracks to find the C-4. Get the C-4, then go to the right side look up to see the upper level. Press Triangle to climb onto the red crate. Press Triangle to keep climbing up through the debris until you reach the top. Note: This is the only way to exit the lower level.

1. Make CBDC go against you. Go to a dead agent and give him a shot in the head 5 times. All agents will fire at you but you can not fire back. 2.Another way is to shot a CBDC in the stomach one time with the 9mm. Then shot him in the back of the head with the shotgun. They will turn against you, but you CAN kill them. This hint willnot always work.

Pause the game and go to the weapons menu. Highlight the silenced 9mm and press AND HOLD left, R2,select,L1,square,and X.

First pause the game and go to the Options menu, then highlight select mission. "Now this is where it gets funky",press AND HOLD L1, R1, select, left, square, and X. You might need help with holding some buttons.

All Weapons And Infinite Ammo

Pause the game and highlight weaponry. Press and hold right, R2, L2, circle, square, X. If you entered the code correctly then your weapon list should update it's self. You have to reenter the code at the tart of every level.

Locate the area in level 1 where your character goes through a window to get to an elevator. Go straight and jump over the boxes. There are pictures on the wall that resemble doors. Approach the middle picture where the Flak Jacket is located. Then, pause the game and enable the "Weak enemies" code. The game will resume in a movie theatre. Walk into the entrances to the theatre (the curtains) to watch the FMV sequences. Press X to advance to the next FMV sequence or press Start to exit. For the PAL version of the game, hold L2 + R2 + Select + Square + X.

Pause the game, highlight the "Silenced 9mm" under the "Weapons" option, then hold Left + L1 + R2 + Select + Square + X (simultaneously). If you entered the code correctly, Gabe will say "Understood".

We have no unlockables for Syphon Filter yet. If you have any unlockables please submit them.

We have no easter eggs for Syphon Filter yet. If you have any unlockables please submit them.

We have no glitches for Syphon Filter yet. If you have any unlockables please submit them.

Submit a cheat for Syphon Filter