Use the above links or scroll down see all to the Game Boy Advance cheats we have available for The Legend of Zelda: Minish Cap. 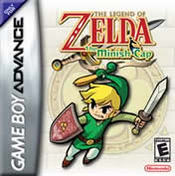 First get the mole mitts then go to the door of your house. Dig on the left side of the door and you'll get 20 rupees, Go inside your house and go back out to repeat this.

In the beginning of the game, you will start in your house. There is a treasure box. Open it to get 20 rupees, although you may want to save it until later when you might need it.

In North Hyrule Field, there is a lone tree NEXT to the fairy spring. Dash into it and a fairy will pop out. do this as many times as you like.

If you go to the tree right next to the fairy fountain and dash into it using the Pegasus Boots,a fairy will appear.

Gorman will show up in Hyrule Town when you fuse Kinstones with one of the sisters at the inn. If you talk to him, the shady real estate agent will tell you he's looking for a tenant. Whichever sister you inform of the vacancy will move into the house and fill one of your empty bottles with a free charm when you visit her. The red sister's charm will inmcrease your strength, (and change your clothes red) the blue's will boost your defence, (and change your clothes blue) and the green's will power up both attributes (though to a lessr extent). If you fuse Kinstones with Bremor (who's standing next to the post office), the carpenters will build a new house that another one of the sisters can move into.

In addition to replenished health, you'll recive a free Kinstone when you stay at the inn. The cheap room (50 rupees) comes with a green Kinstone. If you decide to splurge on the 200- Rupee room, you'll get a blue Kinstone. High- society types who spend 400 Rupees on the luxury suite will find a red Kinstone on their pillow. (ok, not LITERALLY on their pillow, but, it's in the treasure chest, ok?) lol!

If you fuse Kinstones with the postman who's running around Hyrule Town, Marcy will start selling the "Swordsman Newsletter" at the post office. Each issue is packed with helpful tips for aspiring warriors. Additional volumes will become available as you train with the swordmasters.

How To Get Mysterious Shells

If you are in need of mysterious shells all you have to do is go to south Hyrule feild and start cutting grass with your sword. After cutting some grass you should find some mysterious shells.

Get The Golden Tingle Statue

Complete all kinstone fusions then talk to Tingle.

Once you got the Carlov Medal, talk to the man sitting at the table outside of the cafe and he'll give you the key to go into his house which is the house that was locked on one side. Inside, you'll see a phonograph that can play muisic that you heared throughout the game. Don't forget to get the heart piece and the three chests.

When you get to the part where it's really dark in the Royal Valley, get out your flame lanturn and go in the following directions to the graveyard: up, left, left, up, right and up.

Get The Light Arrows

If you have already beaten the game you cannot get the light arrows. First you need to go to Hyrule Town. Then go to the northwest part of town and you will see a house with a yellow roof. Fuse kinstones with the man inside the house. It will unlock a teleport to a castle in the Cloud Tops. In the castle, you will find an old man plagued by an evil spirit. Then use the gust jar to suck up the ghost. When you come back to the Cloud Tops later in the game, go into the castle and talk to the same old man. Then he'll give you the light arrows.

When you get Roc's cape, jump through the bell in the middle of Hyrule Town then a heart piece will fall out.

Sleep In Your Bed

When you go to your house, go upstairs to your room. Go infront of your bed and Ezlo will ask you if you want to take a nap. Say yes and you'll go to sleep. When you wake up, your health will be full. This is an easier way to heal your self without trying to find a fairy.

Get The Magical Boomerang

At Lon Lon Ranch, Talon sort of looks like Mario with the mustach, red shirt and blue overalls. Another are Mario enemies. The Bombite look exactly like Bob-ombs except they have red eyes and feet, the Spiked Beetle looks like Spinys except are blue and there is an enemy that looks like Lakitu but he throws electric balls instead of spinys.

When you go to Royal Crypt in Royal Valley, the music is the same music from the temple levels in The Legend of Zelda.

To get remote bombs, go back to Minish Village and talk to the elder, then fuse kinstones with him. Then go to where you first got the original bombs from the picori. Talk to him and you'll get the remote bombs. Just set the bomb wherever you like and press the same button to blow it up.

In the game, you night notice some of the same characters you see in the consol versions like the carpenters.

Get The Mirror Sheild

First you must beat the game and complete the Goron quest. Go to the sixth and final Goron and fuse kinstones with him. Then the giant Goron will appear on top of Veil Falls. Go there and let the giant Goron eat your small sheild, come back to him later and he will give you the mirror sheild.

In Hyrule Town, play the cucco catching game over and over again. Every time you win, you will get rupees and shells.

Throughout the game, you will see sparkling trees. Break them open by running into them with your pegasus on. When they open, you can use them to turn small.

Defeat The Boss In The Fortress Of Winds

To beat the boss of the Fortress of Winds first equip the bow and arrow and your sword. Try to shoot the orbs on his hands. He will try to punch you and throw you across the room. When you have shot his hands and stunned then he will fall to the ground.Then shrink down to the minish size by shrinking on the shrink portal in the top of the room. Enter through his mouth quickly and slash the collumn with the eye on it. Then you need to get out quick. When your out redo the process with shooting his hands. Then shrink and go inside him again. This time equip the mole mitts and dig to the correct collumn quickly. Repeat the whole porcess until hes defeated. You will get a heart container but you will not get the wind element until later in the game.

To beat Gleeok the boss of The Cave of Flames first equip the cane of pacci and your sword. Try to distract him and get a good aim at his shell. Avoid getting hit by thwe fireballs. When they are on the ground you can slash them and they may have a heart at times. Then when you have a good shot fire a blast from the cane of pacci at him. This will cause his shell to fly up exposing his back and causing him to be stunned. when his head crashes to the ground run across his neck until your on his back. Then hack away at his yellow orb on his back. Be careful because he will submerge in the lava when he wakes up. He will then try to hit you with rocks. Avoid then by rolling when a shadow is on top of you. Repeat the process three or four times to defeat him. You'll get a heart container and the fire element.

To beat the giant green Chu Ju of Deepwood Shrine first equip the gust jar and your sword. Then suck up the goop at the bottom of the chu ju. He will begin to fall. Try not to get smashed by him when he falls. When he's on the ground hack at him like crazy with the sword. Do this two or three times to beat him. You'll get a heart container and the earth element when its all over.

We have no cheats or codes for The Legend of Zelda: Minish Cap yet. If you have any unlockables please submit them.

We have no unlockables for The Legend of Zelda: Minish Cap yet. If you have any unlockables please submit them.

We have no easter eggs for The Legend of Zelda: Minish Cap yet. If you have any unlockables please submit them.

We have no glitches for The Legend of Zelda: Minish Cap yet. If you have any unlockables please submit them.

Created by: ratchet and clank rulez. Read the full guide...

Submit a cheat for The Legend of Zelda: Minish Cap