Use the above links or scroll down see all to the Xbox 360 cheats we have available for Tom Clancy's Ghost Recon Advanced Warfighter. 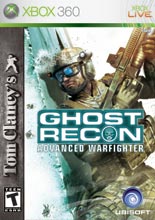 The drone is like a heli but it spies on enemies without being seen. To destroy it, pull out a RocketLauncher or a SniperRifle. Aim for the middle of the spinning thing and Bam! Keep it up and it will spin in circles and blow. Keep in mind that you cant spy on enemies anymore if you do this.

Play any Level and equip the SCAR-H/EGLM gun at a rally point. Then enter the unlimited ammo cheat and switch to second fire with your gun (witch should be a grenade launcher). If you entered the ammo cheat correctly it shoud not give you any info on your ammo and rounds. Now target the enemy and you should have a rapid for non-relodable grenade launcher! Now to shoot hail fire, aim at the enemy and tap fire repediatly and move your reticle side to side slightly on the enemy's group! This cheat is basicly a machine granade luancher, one hit kills! Its cool but destructive, so be careful

Get on roof in Treasury level

In the Treasury level, it is possible to get up on the roof of the treasury. Have your pistol or grenade equipped in order to run faster. Run directly at the back door and dive into it; do this by running and quickly clicking the Right Analog-stick. Make sure your head hits the door and you should teleport to the roof. This also works on the level with the wall. You can teleport up into the rooms on the ends of the wall. Note: This may require some practice and should work with any building with an overhanging ledge that you can dive under

While running, quickly click the Left Analog- stick to slide along the ground or click and hold the Left Analog-stick to do a sort of belly flop and slide on your stomach.

Get over 500 total head shots in Multiplayer mode to unlock the Sniper Rifle.

Destroy 100 helicopters in Multiplayer mode to unlock the Falcon weapon.

While in the pause menu press and hold in this order: Left Trigger, Right Trigger and Back. Enter the codes while holding these buttons. A noise should tell you it has worked. Then press LB(2), RB, X, RB, Y.

You must press Start during Combat then hold down the LT, RT + Back (Select) buttons. And then press Y, Y, X, RB, X, LB! You should here a chime sound and the achievements in Single Player will still be unlockable! Team Invicible is: hold LT + RT + Back and slowly press X, X, Y, RB, Y, LB.

We have no unlockables for Tom Clancy's Ghost Recon Advanced Warfighter yet. If you have any unlockables please submit them.

We have no easter eggs for Tom Clancy's Ghost Recon Advanced Warfighter yet. If you have any unlockables please submit them.

We have no glitches for Tom Clancy's Ghost Recon Advanced Warfighter yet. If you have any unlockables please submit them.

We have no achievements or trophies for Tom Clancy's Ghost Recon Advanced Warfighter yet. If you have any unlockables please submit them.