Use the above links or scroll down see all to the Xbox 360 cheats we have available for Prototype. 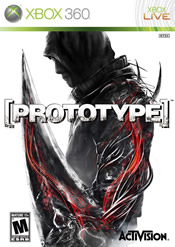 To get all your powers after you beat the game start a new game and select the difficulty level easy+. You get all powers back after the first mission.

When you first go into Free roam mode, then search the city for the blue Landmark orbs (there are 200), and the purple Hint orbs. This way you can explore the city and get quick EP. For every 20 or so landmark orbs you get an EP bonus and the amount of EP per orb is then increased. Find orbs until you have enough to buy the currently unlocked upgrades. Do missions to unlock more upgrades.

For me, the best power is the whipfist, it can take out most helis in one concentrated hit when powered up all the way. Now this has a very powerful attack and long ranges.

For those people that can't get your skills up, this is what you need to do. I've found out and this is what I did. Do three missions and after you've completed three full ones press the start button and go to your map. Now the blue areas are military areas and the red are infected. In the middle of the military bases are a little symbol, this is what you want to head to. Now you will have to b stealthy and in the front of the building is a commander, you have to consume him (eat him) and take his form, now you want to be able to get in until your radar goes down. You walk into the door and your inside. Now there are a lot of guys in here and I'm talking about like 30 at the least maybe, but there are people with icons over them, these are the people you want to keep alive. You can kill the people around them and save the icons for after, but if you consume the icon people your stats will go up and it'll tell you which one goes up. Now if you want points eat the icon guys and then kill every guy in the inside of the base and you will get bonus points. This goes for all the blue bases that are on your map.

Select "Extras" from the Main Menu and go to "Cheats" Right, Right, Left, Down, Up, Up, Up, Down - Unlock Body Surf Ability.

To unlock the Platinum (and some of the "Radical" events), you just need to get a Gold ranking in all events.

After you complete Story Mode, you can then replay all the Story Mode sections with all of your previously unlocked powers and upgrades. Game+ Mode is for the difficulty you completed story mode (and lower difficulties).

Beat the game in Normal Difficulty.

We have no easter eggs for Prototype yet. If you have any unlockables please submit them.

We have no glitches for Prototype yet. If you have any unlockables please submit them.

We have no guides or FAQs for Prototype yet. If you have any unlockables please submit them.

Submit a cheat for Prototype