Use the above links or scroll down see all to the GameCube cheats we have available for All-Star Baseball 2003. 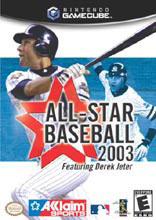 Start a game and allow the controller to remain idel. After a few minutes after they have announced the lineups and the starting pitcher, Thom Brennaman will start telling in-depth stories about baseball.

Use the following trick to unlock all the cards in one or two games. Once you unlock the Cooperstown Legends and the Pixels, play as the Legends. You will find that within the fifth or sixth inning, every hit equals ten points and possibly more. Constantly hit homeruns and strike out the batters and you should have forty to fifty packs to open after the game. This is the easiest way to complete your card collection and unlock the cheats.

For easy points in any one of the three modes of trivia (classic, home run derby, and speed), when you get a wrong answer, do not continue to the next question. Instead, press B so that the game asks if you want to quit. Then, press B again to remain in the game. After you have done this, press A to go advance to the next question. As a result, the game will give you a single and not penalize you with an out. Note: In home run derby trivia, this method will give you a homerun instead of an out.

You can gain "points" for certain feats performed during a game. An easy way to get a lot of points is to throw a perfect game. This is worth 100 points. Switch controls every time the CPU is up at bat and intentionally strike out. This will get you points for 27 strikeouts, and for a perfect game. Repeat as many times as needed. To get more points in franchise mode to sign your free agents, during the off season either create a player and pick him up as a free agent or sign free agents and release them at the end of the season.

While looking at the credits press A to hear commentary about the developer who is currently on the screen.

Press L at the controller selection screen to activate cheats that have been bought.

Use trades to get rid of your older less talented players for slightly better players. Even if the CPU rejects your trade, keep trying repeatedly and it will usually eventually accept it. However, make the trade reasonable, such as a B- player for a B or B+ player. If the player you really want just does not seem to want to join your team, try trading for another player who is slightly better, then return to that player you want and try again. Do this every season to keep good young players.

In season, franchise or expansion mode, go to the DL, and put any pitcher on the 15 day DL. Then immediately take him back into your lineup. He will have recovered all of his energy.

The best pitchers have a pitch called a "Slurve" (for example, Mark Burhele of the Chicago White Sox). Also try the "Dominate Curve" with Pedro.

Immediately after the pitcher releases the ball, press Start. You will see where the ball is going and if it will be a strike or ball. Resume the game and move your batting cursor over it to get a nice powerful swing. Note: You do not need to press Start directly after the pitcher lets go of the ball -- it just gives you more time to move your cursor after the game is resumed. Use the pause technique before batting. When you see where the ball is going, try your best to get the ball as close to the point of the contact triangle (the part closest to the batter, not the thick part of the triangle). You will usually get homeruns or at least doubles.

After hitting a homerun, a replay of it will be displayed. When you see your batter heading home from third base, press various buttons to see different camera angles.

You can gain points for certain feats performed during a game. You can use these points to buy cards which unlock cheats, stadiums, jerseys, producers, and players. An easy way to get a lot of points is to throw a perfect game. This is worth 100 points. Switch controls every time the CPU is up at bat and intentionally strike out. This will get you points for 27 strikeouts, and for a perfect game. Repeat this as many times as needed to get an unlimited amount of points.

We have no unlockables for All-Star Baseball 2003 yet. If you have any unlockables please submit them.

We have no easter eggs for All-Star Baseball 2003 yet. If you have any unlockables please submit them.

We have no glitches for All-Star Baseball 2003 yet. If you have any unlockables please submit them.

Submit a cheat for All-Star Baseball 2003